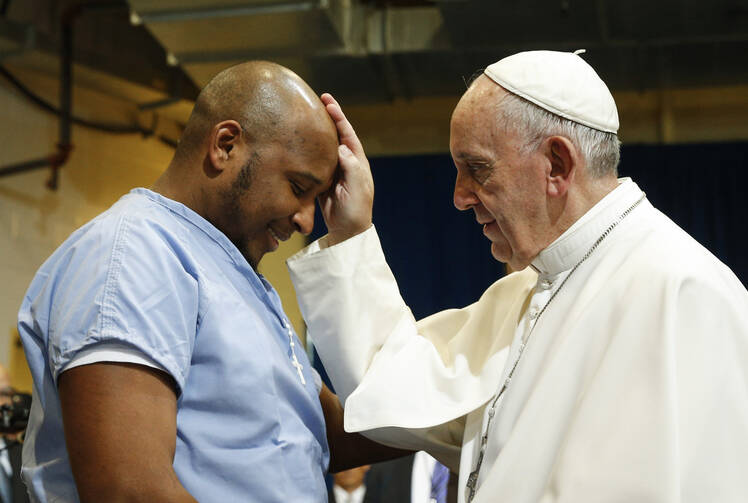 Pope Francis blesses a prisoner as he visits the Curran-Fromhold Correctional Facility in Philadelphia in September 2015. (CNS photo/Paul Haring)

I was in prison and you came to me.... Truly, I say to you, as you did it to one of the least of these my brothers, you did it to me.

During his trip to the United States in 2015, Pope Francis visited inmates at the Curran-Fromhold Correctional Facility in Philadelphia. “[Christ] teaches us to see the world through his eyes,” he said, “eyes which are not scandalized by the dust picked up along the way but want to cleanse, heal and restore.”

Pope Francis suggested in Philadelphia that mercy requires not only an end to suffering but an ongoing commitment to human dignity. He said we must accept the lost and the sinner as our own and give them the aid they need to “cleanse, heal and restore” their lives. Those in prison and returning to the community have, to be sure, done wrong—sometimes the unthinkably wrong—but there is no wrong that cannot be forgiven and no life that cannot be saved. The work of prisoner re-entry is the work of forgiveness and as such is the Catholic’s duty.

Every year over 650,000 men and women are released from state and federal prisons. (Over 75 percent—487,500 individuals—are re-arrested within five years.) They have great difficulty finding employment and housing, and many are dealing with alcohol or drug addiction. Most re-entering persons do not immediately obtain health insurance and thus do not have access to medical or behavioral health care. Prison may be punishment by design, but people who are re-entering civic society ought not be punished anew by neglect, indifference or, worse, contempt.

Prisoners who are re-entering civic society ought not be punished anew by neglect, indifference or, worse, contempt.

From its creation, the Catholic Church has accepted the role of punishment only in the context of facilitating redemption. In his Summa Theologiae, St. Thomas Aquinas says that in all things God is both perfectly just and perfectly merciful. Punishment is just only insofar as it contributes to the ultimate happiness of all involved—including the punished. The Catechism of the Catholic Church echoes Aquinas’s logic. It says that “punishment, in addition to preserving public order and the safety of persons, has a medicinal scope: as far as possible it should contribute to the correction of the offender” (No. 2266). In other words, punishment should be in accordance with its three purposes: protection of the common good, restoration of public order and the conversion or rehabilitation of the offender.

But the “scarlet F,” for felon, now effectively precludes re-entering individuals from most public and private employment, as well as housing. A law signed by President Clinton in 1996, for example, imposes a lifetime ban on welfare benefits and food stamps for those convicted of distributing drugs. Returning persons who have this conviction are also ineligible for many forms of housing assistance.

Re-entry efforts are by nature efforts at redemption, and redemption is the calling card of the Christian. Zachariah Presutti, S.J., has exemplified this commitment through the establishment of Thrive for Life, a re-entry initiative in New York City that aims to work collaboratively with Jesuit education institutions. The New Jersey Reentry Corporation (of which I am chairman) likewise aims to remain consistent with the principles of redemption through a wraparound service model and focus on the whole person. We offer a broad array of services in a rigorous program that has yielded a 62 percent employment rate.

The storyline of man’s existence has been from fall to salvation. Our failure in Eden is echoed in every act of sin and our redemption at Calvary in every act of absolution. Pope Francis said in Philadelphia, “[God] wants to help us set out again, to resume our journey, to recover our hope, to restore our trust. He wants us to keep walking along the paths of life, to realize that we have a mission, and that confinement is never the same thing as exclusion.”

Those coming back into the community from prison are not disqualified from salvation, nor are they undeserving of the mercy the rest of us so often enjoy. They are representatives of all of us: the Zacchaeuses, prodigal sons and adulterous widows of the world, who are the least worthy but most loved. Christ came for the sinner, and it is the church’s imperative to give the sinner a second chance at salvation. “Re-entry” is a Christian idea, and that means assisting returning persons to restore their lives to a healthy and virtuous place. Its time has come. 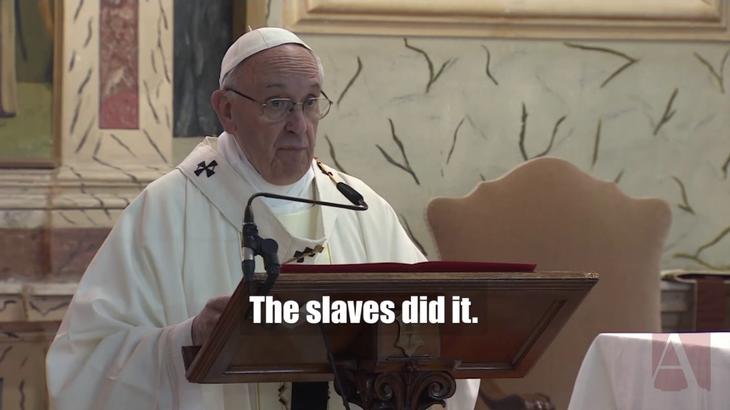 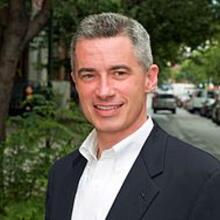 Jim McGreevey is executive director of the Jersey City Employment and Training Program and chairman of the New Jersey Reentry Corporation. He is a former governor of New Jersey.

If Catholics did one fifth of what smiling authors ( nice photo by the way) tell them is mandatory, they would have no time for employment or family life at all. The epistle by Christ through Paul (I Cor.5:11) says to not associate with a brother if he is a thief. Christ talked therefore of visiting repentant inmates only, inmate debtor relatives, the persecuted to come in the Empire of Rome for centuries, categories of a different culture for inmate varieties etc.....or....or.... His first words ( I was a prisoner) contradict His words through the epistle....don't assocate with thieves....unless the thief repents in prison.
I fought a burglar three years ago and almost killed him ( against God's law from Exodus 22) despite his stealing a lethal weapon from my house. If I visited him in prison, he would make an appointment with me for specific hours and then have his crew hit my house again on those hours. A black lady in this big city moved because someone at work phoned a crew repeatedly and had them hit her house while the crew knew she was safely at the workplace. She had to move.
Visit the imprisoned thief if he is a repentant thief relative who you know as to whether to trust or not. Visit stranger inmates and you may pay the price that phones make possible.
People quote Aquinas on punishment (and implicitly the death penalty) because higher sources don't reflect Aquinas....Romans 13:4 by God through Paul ( way above Aquinas...see Dei Verbum) certainly doesn't absolutely affirm " restore " as mandatory...."Swords" don't restore....swords don't restore....say it three times after reading Rom.13:4. James is executed by Herod with the exact "machaira" of Rom.13:4 in Acts 12:2....don't fall for original word routine.
Neither does the catechism of the Council of Trent insist on " restore" , neither did Pius XII in 1952 and neither did Christ when affirming the death penalty in Mark 7:10 for abuse of parents. Enough with Aquinas. I read the entire Summa Theologica. He is a key reason 5000 heretics were killed because of a different section of his on executing heretics...not restoring them.
Catholics should be involved in something for the Church. Rare is the Catholic throughout history involved in inmate reentry. Visit prisoners who are non relatives....and they may fake repentance and have a crew hit your house once they know your name and address.
I do evangelizing toward Augustine and scripture not toward my heresy probable AL tinged Diocese ...and do partial indulgence work for murder and accident victims from the news....done...I have a life that needs spaces plus work....not just work mandated by net authors.