Saying grace with a tortured prisoner 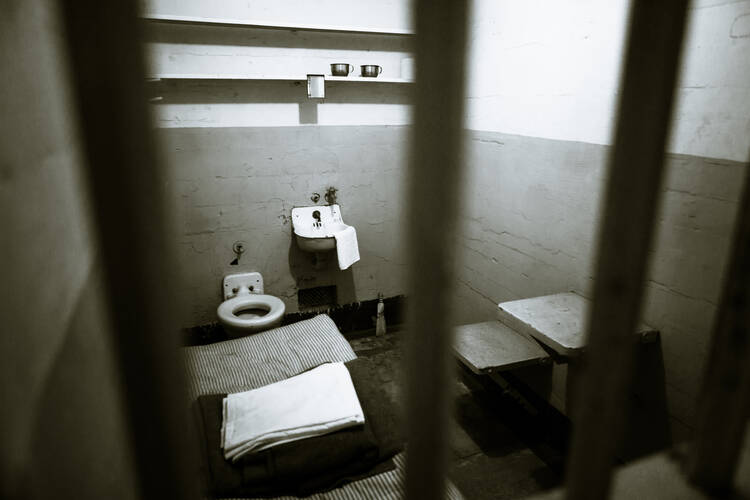 Today I sat at the table with the one we call Spiderweb Man. I do not know his Christian name. He smiles but rarely talks. His nickname springs from his obsessive ritual of brushing one hand across the other, over his arms, down his pants; his fingers and thumbs flicking over each other as if to remove something sticky. This is his strange dance. He performs it whenever he is standing still, watching television, waiting in line at the water cooler or walking in a long queue to and from chow. It is a strange dance lacking rhythm and, to the uninformed, any observable purpose. But ask any inmate who has spoken with him, and you will discover why he does it.

It is said he spent 15 years in close management confinement in an 8-foot by 12-foot room, usually with no roommate because of his unstable mental health. Around three times a week he was allowed to go outside to a 10-foot square “dog cage,” where he could get fresh air and sunshine for 30 to 45 minutes a pop. He was also given three showers each week, where he washed while shackled. Otherwise, he was in his cell—or being escorted to medical care in leg irons and handcuffs.

It is a strange dance lacking rhythm and, to the uninformed, any observable purpose.

While on C.M.C., prison staff learned he was deathly afraid of spiders. Because he had a life sentence, because he was insane, because it was deemed not safe to house him in general population, because he received no mail, because he received no visitors, because he either could not or would not make sensible or coherent notes or journals or submit a complaint asking for relief and because he spoke very poor English, the staff was free to discover whatever recreational value this isolated man might offer.

So they would have inmates collect spiders and set them loose in Spiderweb Man’s room, an institutional catch-and-release program. The judge set his sentence. The guards and their inmate accomplices put the sting to it. And the spider web dance is a lingering effect.

As I sat beside Spiderweb Man, I noticed his head was bowed down. I looked at this man, whom most considered “shot out,” not quite in tune with reality, and could not help but wonder: Did he seek the same “other” in the ethereal out-there that I was searching for? After I lifted my head from saying grace, I noticed his head was still bowed—in thanksgiving, I presumed. Knowing how precious are the few minutes we have to eat, I worried about his zeal in prayer.

Did he seek the same “other” in the ethereal out-there that I was searching for?

Sometimes I am so rushed at meals I swallow my rice by the sporkful with water as if it were 100 tiny pills. I chomp my meat in just-swallowable chunks. It does not detract much from the dining experience. Only the biweekly chicken leg is recognizable anyway. The best compliment I ever heard about a dish was: “Man! That hamburger really did taste like a hamburger.”

As you grab your tray you are careful to notice if the portions are too small or if there is any contamination from some undefined substance, a hair or a bug or the meat burned to an intolerable level. If so, you must immediately approach the sergeant on duty. Maybe he or she will care and will allow a replacement. Or maybe they won’t care. If so, you just wear it. Carry on. Give it away. Eat it. Then, you grab a plastic tumbler. Examine it for grease or debris. Get a drink—sweet tea, saccharine-sweetened grape soda or a sometimes-cool glass of water.

I wondered if it is because he sees the unseen that his time offered during grace was slower, perhaps more sincere than mine.

If you have managed your place in the slow moving serpentine queue, you get to eat with your friends. If not, you gulp your meal with strangers or even enemies. All the while the guards are shouting, “First row! Time to go! You talking or you eating?” Inmates are shouting out for hopeful trades.

The point being, chow time is no repast. It is not breaking bread together for communal fellowship. It is not a place to talk or laugh. It is simply rapid refueling. The goal is to finish the tray before you are forced to leave.

We are one body: Catholics raise voices against the use of solitary confinement
Katie Rose Quandt

A Solitary Scandal
The Editors

Spiderweb Man, however, was not rushing his prayers. I wondered if it is because he sees the unseen that his reverence and time offered during grace was slower, perhaps more sincere than mine. I noticed the spider webs were not irritating him as he prayed over his meal. He was still. His hands were folded. Only his lips moved.

He ate what he could and, when shouted at, left. Perhaps, during that moment of peace, the unseen webs were dissolved by his faith in the unseen God, who has not forsaken him. Each meal may be a foretaste of a banquet to come—where spiders are history, where he understands the language, where he is free of anger and fear and where neither inmates nor professionals can torment him.

If so, he could not tell me. Nevertheless, I hope it is the case. For seeing his head bowed at such a moment shined a light onto my otherwise forgettable supper.

Louis Templeman is the father of five adult daughters and very happily married to Joy. He has written for a variety of publications and has worked as a social worker, Pentecostal pastor and house painter. The events recounted here occurred during his time as an inmate in Baker Correctional Institution, Sanderson, Fla., in 2003. It is included in his essay collection Ice Water from Hell, published under his pen name, Gano Rinehart.

As a 55 year old man, I've lived in a good nursing home/ rehabilitation center for nearly two years, but although I can't leave my residence whenever I choose, I do have the opportunity to leave and enjoy the outside world when accompanied by family or friends. However, I sympathize with anyone who is imprisoned for life, as he isn't free to enjoy life outside. It must be especially difficult for some who is mentally ill. I can communicate by talking, writing, and in other ways unlike "Spiderman," although I also have the mental illness of obsessive-compulsive disorder . However, this is not as serious as literally being in prison. Also, my brother-in-law Thom's brother has schizophrenia. As a retired Special Education teacher who taught some students with behavior disorders,, my job was both challenging but enjoyable. I believe that schizophrenia must be the cruelest mental illness. I also have a pen-pal pal who's in a Philadelphia prison for life. Hubert is a Jehovah's Witness, and although as an imperfect Catholic (I'm gay, have at times had sex with men, but have found forgiveness and consolation through the Sacrament of Reconciliation with a compassionate priest) we sometimes disagree about some matters, I believe from our correspondence that he's reformed. He believes that capital punishment is justified by the Bible. Although I believe in the truth of the Bible, I do think that some of it's language isn't meant to be taken literally. So, both for moral and practical reasons I oppose capital punishment. I pray that prisoners will be treated in a humane prison environment, and that we build a culture of life where human life is respected from conception to natural death. This will take time, but if we pray fervently, I believe that Jesus, the Prince of Peace, will bring peace to the people of our world. We must love God with all our hearts, souls, and mind, and love our neighbor as ourselves.