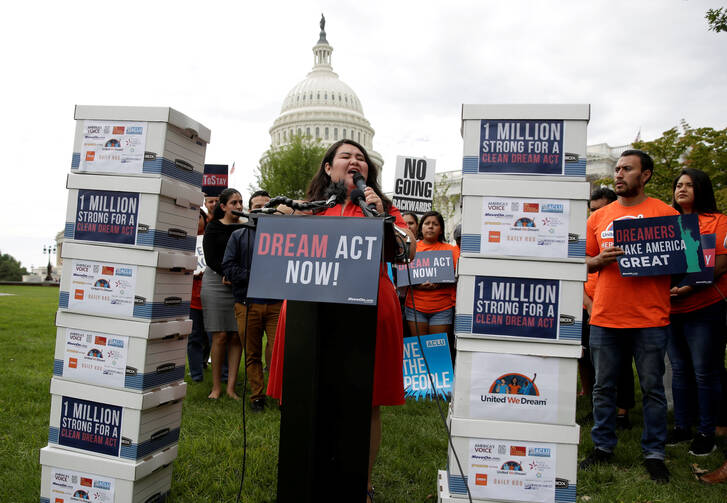 Rosa Martinez, an immigration activist and a recipient of the Deferred Action for Childhood Arrivals program, takes part in a rally Sept. 12 in Washington urging Congress to pass the DREAM Act. (CNS photo/Joshua Roberts, Reuters)

On Sept. 5, President Trump announced his decision to end the Deferred Action for Childhood Arrivals program. Introduced by the Obama administration in 2012, DACA gives undocumented residents brought to the United States as children a reprieve from deportation and allows them to legally work, study and obtain driver’s licenses here. Unless DACA is restored through legislation, these residents will begin losing these protections on March 5. President Trump’s move to end this program was met with strong resistance from immigrants’ rights groups and from religious organizations including the U.S. Catholic bishops. But after the initial flurry of condemnations, how can we move from outrage to action?

1. Familiarize yourself with DACA and the Dream Act

Learn exactly what lawmakers and advocacy groups mean when they refer to DACA, the Dream Act and Dreamers. DACA is the executive order by President Barack Obama that covers approximately 800,000 children and young adults who were brought to the United States illegally. It does not affect all 11 million unauthorized immigrants currently in the United States.

The Development, Relief, and Education for Alien Minors Act (Dream Act) is a bill that Senators Dick Durbin, a Democrat from Illinois, and Orrin Hatch, a Republican from Utah, first introduced in 2001. The Dream Act would apply to children brought to the United States illegally—often called Dreamers because of this bill—and would create a path for permanent residency and eventually legal citizenship. For more details about DACA and the Dream Act, visit the Georgetown Law Library’s Guide to Immigrant and Refugee Civil Rights.

President Trump’s decision to suspend DACA has serious implications. Since the announcement, new DACA applications are no longer accepted. But those whose DACA status will expire before March 5, 2018, may submit an application for a renewal of DACA status that would last two years. Catholic Migration Services has prepared a fact sheet to explain how President Trump’s announcement affects current undocumented residents.

2. Show your support for a “clean” Dream Act

On Sept. 13, Democratic leaders announced that they had met with President Trump and he had agreed to sign a Dream Act if it passed in Congress. However, the Democrats and the White House have made conflicting statements about whether a Dream Act would be accompanied by funding for a wall along the border between the United States and Mexico. Advocacy groups for undocumented residents worry that, in order to attract Republican support, a Dream Act will be tied to funding for the wall or a reduction in legal immigration. They urge people to tell their representatives in Congress to support a “clean” Dream Act.

After the initial flurry of condemnations on the end of DACA, how can we move from outrage to action?

The Network Lobby for Catholic Social Justice has prepared a customizable email message and “call script” for contacting your U.S. representatives and senators. Emails can be effective, but personalized phone calls and letters are still better ways to make your voice heard. You can find the address of your House member here. You can find the addresses of your senators here.

Aside from personally advocating for undocumented youths, you can also support organizations that provide scholarships, legal resources and mental health care to Dreamers.

DACA students are ineligible for federal financial aid, student loans and grants, so TheDream.US provides scholarships for low-income Dreamers to attend over 75 partner colleges, including Arrupe College of Loyola University Chicago. Stephen Katsouros, S.J., the dean and executive director of the first Jesuit community college, told America that TheDream.US is “a great partner and a great advocate for undocumented students.”

In 2014, Loyola University Chicago’s student population created the Magis Scholarship, a fund supported by $2.50 each year from each Loyola student to help undocumented students attend the university. Marquette University’s Ignacio Ellacuria, S.J. Scholarship is a similar student-led initiative to offset tuition costs for low-income Dreamers. You can donate to these scholarships or encourage your local universities and colleges to start funds using the Magis or Ellacuria model.

United We Dream is the largest immigrant-youth organization in the United States. With over 100,000 members, they advocate for Dreamers by providing legal counsel and mental health resources. You can donate or attend United We Dream events in your area. 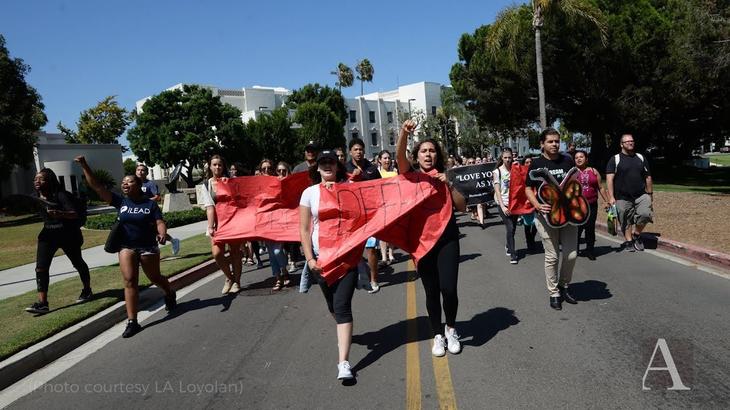 4. Ask your parish to support Dreamers

“Sometimes it’s not necessarily the best idea to reinvent the wheel at your parish,” says Anthony Andreassi, C.O., vicar for faith formation at the Brooklyn Oratory Parishes of the Assumption of the Blessed Virgin Mary and St. Boniface. Instead, it may make more sense to partner with local organizations who have the expertise to address these issues rather than trying to create new programs within the parish.

Father Andreassi recommends town-hall-style meetings and potluck dinners with local immigrants’ rights organizations. Events like these can connect people of faith and identify the needs of each parish. Talking to your pastor about highlighting Catholic social teaching on immigration in homilies or bulletins is also a useful way to increase understanding. And parishes can consider including prayers for the undocumented in the Prayer of the Faithful.

At the heart of this issue is a population of U.S. residents whose future in this country is very uncertain. In August, the Los Angeles Archdiocesan publication Angelus highlighted the story of Jorge Padilla, a 25-year-old undocumented immigrant who has studied and worked in the United States thanks to DACA. In the midst of his anxiety and fear, he says he places his trust in God, not politicians.

Many Dreamers like Mr. Padilla are praying as they try to navigate new developments. By offering prayers on their behalf, you can express solidarity with this cause. The United We Dream organization has used the #PrayingwithDreamers hashtag on social media to draw attention to their plight.

Prayers, social media posts and personal messages all enact a culture of welcome that combats the fear experienced by many undocumented immigrants today.

Hey buddy if you wants to play free game then visit here our websitehttp://solitairetimes.com/klondike/ and play klondike solitaire online game this some of the most playing card game which you love to play in your group here you have to sorts the card from the deck and have to set them in ascending order in sequence.