Time to move from outrage to action on DACA, Fordham University president says 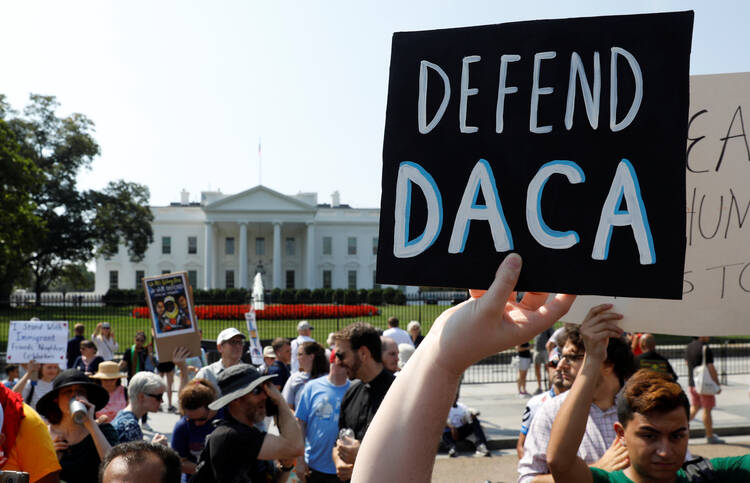 Fordham University President Joseph McShane, S.J., sounds ready for a fight, just returning to his office after delivering the state of the university address at the Bronx school’s fall convocation on Sept. 7. The Trump administration’s decision to rescind the Deferred Action for Childhood Arrivals program, an effort begun under President Obama to protect undocumented people brought to the United States as children from deportation, came up in the address—not for the first time this week.

“It’s inexplicable what’s happened,” he says, “such a betrayal of the genius of the American people. I find it hard to believe it is happening.”

Father McShane has already signed off on two statements in recent days from Jesuit and other Catholic academic leaders from across the country, deploring the president’s decision to end the program in six months. Today he still sounds pretty steamed.

“Such a betrayal of the genius of the American people. I find it hard to believe it is happening.”

“This struck close to home for everyone at Fordham University,” he says. “Our university was founded by an immigrant, who knew the sting of being an outsider,” he adds, referring to Archbishop John Joseph Hughes, a native of County Tyrone, Ireland. “For us as Christians this is unacceptable, simply unacceptable."

Turning to  biblical injunctions, he says, "Widows, orphans, those who are forgotten—those people are our special charge.”

Father McShane applauds the strong statements out of the U.S. Conference of Catholic Bishops this week that likewise expressed its displeasure about the threat to young people registered through DACA, known as Dreamers. “‘Reprehensible,’” he says, “‘denounce,’” quoting the bishops.

“The bishops have been very good on this,” he says, their remarks full of “a lot of forceful nouns and a good choice of adjectives.

“I don’t think the president expected that,” he adds. “I think he has been very surprised by how ferocious the bishops have been.”

“I don’t think the president expected that. I think he has been very surprised by how ferocious the bishops have been.”

And not just bishops. University presidents like Catholic University of America’s John Garvey quickly denounced the decision. The Rev. John I. Jenkins, C.S.C., president of the University of Notre Dame, called the plan “foolish, cruel and un-American.”

In a statement released on Sept. 6, the Association of Jesuit Colleges and Universities said: “Dreamers have planted roots here as students and young professionals, but as a result of [the administration’s] rescission, they will now be forced to become pawns of political maneuvering in Congress.”

The association added: “The nation’s 28 Jesuit colleges and universities will make every effort to protect the Dreamers among our students and alumni.”

Scores of other reactions from Catholic institutions have been much the same. Now with the official statements out of the way, Father McShane says it is time for moving “from outrage to action.”

“It is one thing to be outraged in the moment, we are all pretty perplexed and angry about this, but it is more important to move beyond the outrage to a place of action which has a hope of achieving the desired goal of getting this overturned by an act of Congress.”

He said it was important to demonstrate to the Fordham community wondering “how can we help, what can we do” that they must be informed by what can be most effective. He dismisses appeals to the Trump administration as a waste of political energy. “We have to speak to Congress,” he says. To that end Fordham University will be assisting students in launching letter-writing campaigns to members of Congress in their home districts, advocating for the passage of the long-delayed Dreamers Act, which would formalize the status of DACA students and get them onto a path to citizenship. (For more on this, visit the U.S.C.C.B.’s Justice for Immigrants.)

Mobilizing Fordham students on this campaign should not be much of a challenge, Father McShane thinks. The university’s senior director of communications, Bob Howe, points out that the incoming class is one of the most ethnically and culturally diverse in the school’s history. The DACA issue is very personal to the Fordham community, with many Dreamers among friends and fellow students.

Fordham University will be assisting students in launching letter-writing campaigns to members of Congress in their home districts.

According to the Center for Migration Studies, those eligible for DACA status are indeed deeply embedded in U.S. society: 89 percent are employed; 85 percent have lived in the United States for 10 years or longer; more than 90 percent are fluent or near fluent in English; and 93 percent have graduated from high school.

Donald Kerwin, the center’s executive director, said in a statement on Sept. 5: “By rescinding DACA, the Trump administration will deprive our nation of their talent, energy, and skills. It seeks to remove many future U.S. leaders and some of the nation’s brightest current leaders as well.

“This wrong-headed decision…has dimmed a light of hope for these young people, who want only to contribute and to participate fully in their country.”

While Fordham’s homegrown advocacy campaign gets underway, Father McShane says he will be consulting with legal advisors about how the school should respond to the possibility of deportation attempts on campus.

He is fairly confident that I.C.E.’s own policies regarding so-called sensitive sites like schools and churches should mean that enforcement efforts will not take place at Fordham, but Mr. Howe points out the current prohibition is a bureaucratic guideline, not a law—and it could change at any time. “The only thing holding [I.C.E.] back now is public opinion,” he says.

“What you have to hope for in New York is that surrounded by immigrants, I.C.E. agents may say, ‘This is not my fight,’” Father McShane adds.

He says the Fordham community will be in this fight for the long haul. He expects it to be a long one, just like the Civil Rights Movement that precedes it.

He takes heart with some advice given by Archbishop Desmond Tutu when that anti-apartheid warrior spoke at Fordham in 2005: “God sides with the outsiders.”

The outrage is misplaced. The action is appropriate. Trump has indicated he is open to a reasonable solution. There is significant disagreement on whether an executive order or law was the appropriate mechanism for resolving the issue. Congress can resolve that issue and should. The outrage should be at the congress which Obama felt he had to get around and the current congress who need to step up to the plate. Lobbying congress is the appropriate response.

Most importantly why aren't the Jesuit Presidents and Father Jenkins now just taking advantage of the "political crisis/crunch " the Trump "6 month cancellation notice" has caused and go out and help create pressure on Congress to pass a permanent legal fix without exclusions for this problem instead of dissipating that potential pressure by attacking Trump?
Is their moral outrage on behalf of the Dreamers so subservient to their intense dislike for Trump that they fail to recognize that the Trump 6month recission of DACA is the very platform they need to be successful.

Before readers of this article conclude that Fr. McShane, president of Fordham University, is an example of a courageous human-rights fighter manning the very top of the ramparts of freedom, be apprised that he is presiding over Fordham's shameful racist driven effort to promote the odious agenda of Zionism and to degrade the status of the Arabs in general and the Palestinians in particular on the campuses of Fordham. McShane's malignant behavior towards the Students for Justice in Palestine juxtaposed with his protestations over the repealing of DACA fittingly qualifies him for the "whited sepulchre" of the year award.

DACA was an unconstitutional executive order. Even Obama admitted that. It is up to the American people, through their representatives in Congress, to fix immigration which has been a hot potato for decades. Each successive Congress has been more timid than the previous one and has abrogated legislating to the Executive and Judicial Branches of government. Perhaps it's because the left wants to give everything to everybody in the whole world, while the right asserts that there is not enough money in the world to fund open door policies which increase security risks and social welfare costs while sacrificing our sovereignty . If Congress truly tries its best to work on comprehensive reform, perhaps President Trump will allow extra time for a meaningful bill. It is critical that as a nation we return to the rule of law and honor the separation of the branches of government set in place by our founding fathers.

The problem with "returning to the rule of law" is, what kind of law do we want to return to? I would advocate law that, while formulated under guidelines that prescribe acting according to the dictates of prudence and justice, would explicitly avoid criminalizing discretionary acts of mercy. This balance can, if practiced thoughtfully, preserve the rights of U. S. citizens, while doing what the virtue of mercy does, namely, relieving other persons of the misery of life as an economic or criminal warfare refugee. The idea of having a law that criminalizes or declares unconstitutional the practice of corporal works of mercy if these works are aimed at immigrants strikes me as a little crazy.

Charles
The law you return to is the law that is now on the books......before you can change it you have to deal with it as it is and not as you would want it to be. If Catholic morality principles were coextensive with and were mirrored in the laws , then abortion would be illegal. Like it or not, we are a secular nation with secular laws. These laws may or may not comport with the corporal works of mercy and you should not be surprised or disappointed when they don't.