Pass a Dream Act, but don’t sacrifice the parents 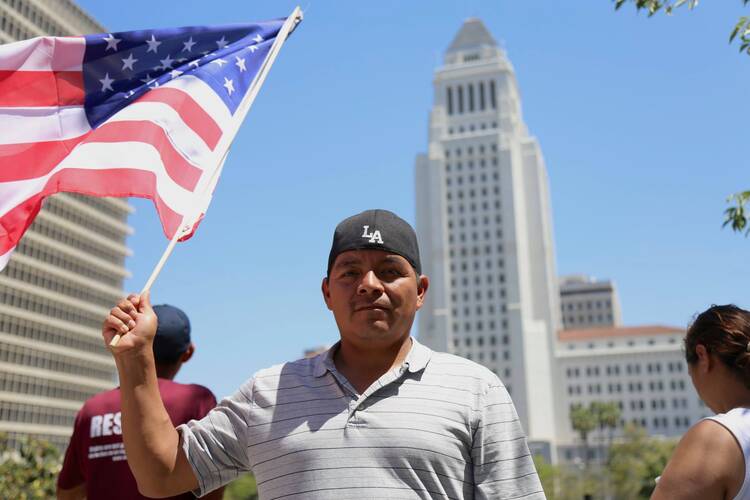 A supporter of comprehensive immigration reform demonstrates in front of Los Angeles City Hall on May 1, 2017, as part of the annual pro-immigrant May Day march. (Photo by Antonio De Loera-Brust)

Americans find the so-called Dreamers—undocumented immigrants who were brought to this country as children—particularly sympathetic. The Deferred Action on Childhood Arrivals program allowed these young people to come out of the shadows, and their stories are undeniably compelling. But it never made sense to me why so many people praise the Dreamers and, often in the same breath, condemn the parents who sacrificed everything to bring them to the United States.

Many of my close friends are Dreamers, and without congressional action they and everyone currently covered by DACA will be subject to deportation by the end of Mr. Trump’s first term. Congress must act quickly to put Dreamers on a path to citizenship. (Recent reports suggest a deal may be in the works.) Polls show that most Americans, including a solid majority of Trump supporters, think Dreamers should have the chance to become citizens. This is a rare chance at bipartisanship and unity in the best tradition of American values. I am optimistic we can accomplish this.

The cost of the Dreamers’ future and security may be a more draconian policy for other immigrants.

What worries me is that in the political deal-making, the cost of the Dreamers’ future and security may be a more draconian policy for other immigrants. I cringe when I hear from politicians variations of “It’s not the Dreamers’ fault. Their parents broke the law.” If it was not their fault, then whose fault was it? With rhetoric like this, we attempt to defend the kids by demeaning the parents.

Of course, words matter less than lives, results matter more than rhetoric, and if politicians need to sell a tough vote by saying what they need to, then so be it. But for those of us not facing a tough re-election battle, let us remember there is nothing shameful in sacrificing everything to build a better life for your children. The Dreamers’ parents left the only country they had ever known so that their kids could dream. It has been said before, but the parents are the original Dreamers.

There is nothing shameful in sacrificing everything to build a better life for your children.

I am sure many of the Dreamer moms and dads would happily sacrifice themselves yet again and accept a political deal that makes life harder for them if it gives their children the chance of citizenship. But what child would want that? What friend or ally to those children could accept that?

The fight for the Dreamers is a fight for every immigrant. We fight for them today so we can fight for everyone else tomorrow. If we cannot protect the group of immigrants that is most integrated, most visible and most “sympathetic,” how can we protect their parents? If we cannot appreciate medical students and valedictorians, how can we appreciate day laborers and farm workers? If we cannot welcome those here already, how can we welcome those who are banned from this country because of their nationality or the parents who have already been deported or the refugees around the world fleeing violence and persecution? This fight is for my friends. But this is also a fight over what kind of country Americans want to live in.

The fight for the Dreamers is a fight for every immigrant.

Passing the Dream Act is the priority right now both because it is politically feasible and because those covered by DACA are in a unique danger. They have passed criminal background checks, paid large fees and given over personal information like home addresses and fingerprints to the government. All would be easy targets for deportation. But in awe-inspiring acts of courage, many Dreamers have come out against any political deal that would result in their families being torn apart. Those of us privileged with citizenship who claim to be in solidarity with Dreamers must not settle for such an outcome either.

We must say to Dreamers: We are never going to stop fighting for your families. We will not lose sight of the bigger picture: a moral and just outcome for immigrants that aligns with Catholic social teaching and reflects the best of American values for all 11 million undocumented people who are our neighbors in this country. The parents of Dreamers deserve protection and a path to citizenship, in recognition of their sacrifices and the significant contributions many have made to our country.

The two things in my life that I love most are my friends and my country. It has been hard to watch my country be so cruel to so many of my friends. Only through just immigration reform can this breach be reconciled. What kind of friend would I be if I accepted leaving my friends’ families behind? What kind of country would we be if we accepted pitting the interests of children against their parents? Resolving the issue of the Dreamers and their families with mercy, justice and compassion is a crucial moral test, not just for our elected leaders but for all of us.
More: Immigration / Donald Trump / Latino

For the “Dreamers” there seems to be some hope for regularizing their status in the USA but I am not so sanguine that citizenship will be a part of it. The Republican Congressional majority may well have some reservations about that, given the Republican political base.

So any hint of trying to make citizens or to even regularize the status of their “criminal” parents – and that is how they are identified by a significant portion of the Republican base and even some of the Republican Congresspersons and Senators – is ideologically anathema to the party of “family values.”

Pope Francis’ comments to the contrary, for the diehard Catholics in the Republican base, it’s sort of like what Bannon says. They agree with the doctrines of the Faith, just not with the moral commentary that they presume to be the alleged political opinions of the Pope and bishops!

There is but a single solution: elect a Democrat Congress – House and Senate – and a Democrat president. That requires people to VOTE!

Vince
Nice job of conflating morality with a right to citizenship for the Dreamers!
I have reread many of the various Bishops commentaries on this issue and have yet to find a statement that as a moral matter the Dreamers must be granted citizenship.
Nor do I find any statement from these Church leaders that the parents of the Dreamers did not break the laws of the United States in coming to this country. You may call them"undocumented " or other linguistically neutral adjective but they are defined as a matter of law as "Illegal aliens". Your proposed solution to the problem of a person who broke the law is to give them the very object of their law breaking.
In a different BUT still very related context THE EDITORS have opined as follows:

"more disturbing the president's pardon of Arpaio undermines the rule of law which is the bed rock principle
on which our Constitutional system rests and sends a powerful signal to Latinos and others that
the enforcement of their civil rights are subject to presidential whim" ( See America Magazine, "WHAT DOES THE ARPAIO PARDON MEAN TO THE FUTUREOF CIVIL RIGHTS")

It takes but the substitution of a few words to apply the EDITORS position on Arpaio pardon to the Obama Executive Order on the Dreamers (DACA) and their parents (DAPA). Indeed the message of DACA/DAPA was received loud and clear in the Latin American Countries that the US immigration laws were not being enforced leading to an influx of hundreds of thousands of unaccompanied immigrant children from 2013 through 2016 .
But since you deride the "Cafeteria morality" of the so called Republican base, I might suggest you examine that same Cafeteria Line to find Durban, Pelosi, Tim Kaine, Cuomo, etc etc taking a pass on Abortion etc..
Despite your suggestion there is no moral salvation to be found by voting for the Democrats.

I have no problem with a political solution to the current impass. But part of that solution is to recognize that in fact the law has been broken: That In fact the "undocumented" immigrants are "illegal aliens"!
Now the political solution may take into account the good intentions of the law breakers in crafting a result that is broadly acceptable but it is counter productive for you to suggest that those "good intentions" are a basis for an outright grant of citizenship (see The Editors comment on Arpaio above). Shrill voices demanding citizenship will only bring out shrill voices demanding law and order prevail. You need to recognize that from a legal point of view the supporters of the immigrant citizenship issue are the petitioners.

I believe there is not one country in the world that allows individuals who enter their country illegally the right of citizenship.