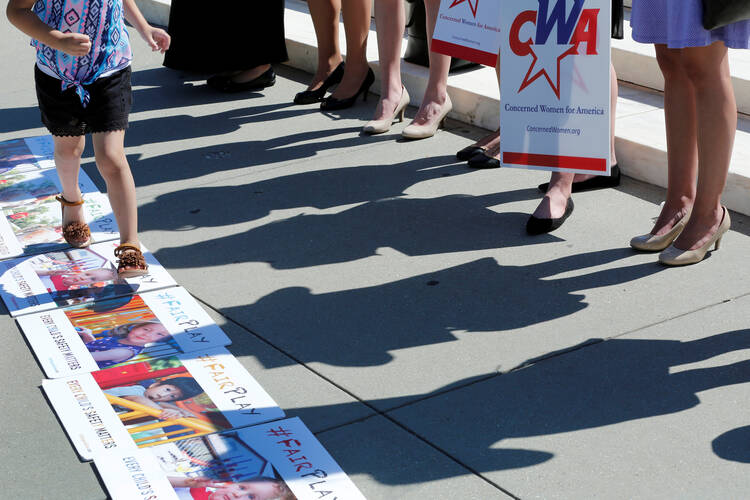 Activists rally outside U.S. Supreme Court in Washington June 26 after the court sided with Trinity Lutheran Church in Columbia, Mo., which sued after being denied a state grant for creating a safer playground (CNS photo/Yuri Gripas, Reuters).

In Trinity Lutheran Church v. Comer, the Supreme Court upheld the right of a religious school to benefit from a state-funded playground resurfacing program.

The court ruled on June 26 that the government may not exclude religious groups from grant programs simply because they are religious. The majority decision, written by Chief Justice John Roberts, held that “denying a generally available benefit solely on account of religious identity imposes a penalty on the free exercise of religion that can be justified only by a state interest ‘of the highest order.’” The rationale for Missouri’s ban, that it wanted to skate, as Justice Roberts put it, “as far as possible from religious establishment concerns,” does not justify religious discrimination.

The Supreme Court court ruled that the government may not exclude religious groups from grant programs simply because they are religious.

The majority opinion mentions, but does not rule upon, language in the Missouri Constitution associated with the “Blaine Amendments” added to most state constitutions beginning in the late 19th century: “That no money shall ever be taken from the public treasury, directly or indirectly, in aid of any church.” The court’s holding is restricted to Missouri’s decision to treat private religious schools differently from private non-religious schools in this particular program. The decision does not require states to fund religious schools.

Indeed, the most significant aspect of the majority opinion may lie in Footnote 3: “This case involves express discrimination based on religious identity with respect to playground resurfacing. We do not address religious uses of funding or other forms of discrimination.”

Justice Stephen Breyer wrote his own concurring opinion. Justices Clarence Thomas and Neil Gorsuch joined the majority opinion except with regard to Footnote 3. This is significant because it indicates how later cases may be decided. Justice Thomas joined Justice Gorsuch in a concurring opinion that criticizes the majority for not going far enough to protect religious rights. Justice Gorsuch questions the majority opinion’s reliance on a distinction set forth in an earlier case, Locke v. Davey, between religious identity or status, which cannot be used as a basis for discrimination, and religious purpose or use, which may justify differential treatment. According to Justice Gorsuch, the distinction is impossible to maintain—“Is it a religious group that built the playground? Or did a group build the playground so it might be used to advance a religious mission?”— and irrelevant. “I don’t see why it should matter whether we describe that benefit, say, as closed to Lutherans (status) or closed to people who do Lutheran things (use). It is free exercise either way.”

The Court today profoundly changes that [church and state] relationship by holding, for the first time, that the Constitution requires the government to provide public funds directly to a church. Its decision slights both our precedents and our history, and its reasoning weakens this country’s longstanding commitment to a separation of church and state beneficial to both.

The dissenting opinion recognizes that previous school funding cases were careful not to cross the free exercise/establishment clause line. Past Supreme Court decisions allowed public benefits to religious school students in the form of bus service, textbooks, scholarships and tuition vouchers, but permitted direct funding to religious groups only “with assurances that public funds would not be used for religious activity, despite the religious nature of the institution.”

The majority decision narrows the gap between the free exercise and establishment clauses. It prohibits states and the federal government from treating religious groups differently from other private organizations, but it does not require government funding of religious organizations. It does not strike down Blaine Amendments and does not prohibit all possible discrimination against religious purposes. Future cases will decide whether the case has not gone far enough to protect religious freedom or has gone so far to erode the wall of separation between church and state that it will come tumbling down to the detriment of both.

There is nothing in the constitution about this as originally many of the states had their own established religion after the country began. Maybe a new era will begin as the Supreme Court takes a different tack, one in sync with the constitution.

You make a good point.

As another writer here implies, let’s hear the reactions when the same proponents of public funding for Catholic schools allow public monies to be used by cults and religions whose doctrines, practices and teachings promote principles adverse to other religions and the USA Constitution!

Here in NYS public funds are allowed to be shared with religious schools for items that do not promote the religion itself…textbooks, transportation, school lunches, etc. When we start public funding of the content of the education given in religious and private schools, however, it’s a whole other ballgame.

The Blaine amendment, a product of virulent anti-Catholic bias, may yet prove to be a boon to the nation.

Vince
See footnote (3).to the Opinion........result will be the same "for a playground" for even a cult. Otherwise the issue is still wide open whether mainstream religion or cult.
I doubt that Blaine Amendments will ever be a boon.........personally I think the Federal Constitution First Amendment has prempted the field of separation of Church and State, so that State amendments to their constitutions respecting this issue will be treated the same as "Immigration" Amendments attempting to be more restrictive than the federal approach (see Arizona case)

Im glad the kids have a rubberized playground but the first madrase that applies for help - we'll see how this court decidess. I'm amazed that we're not stricter about church and state separation. Scientology's having a field day.

Im glad the kids have a rubberized playground but the first madrase that applies for help - we'll see how this court decidess. I'm amazed that we're not stricter about church and state separation. Scientology's having a field day.