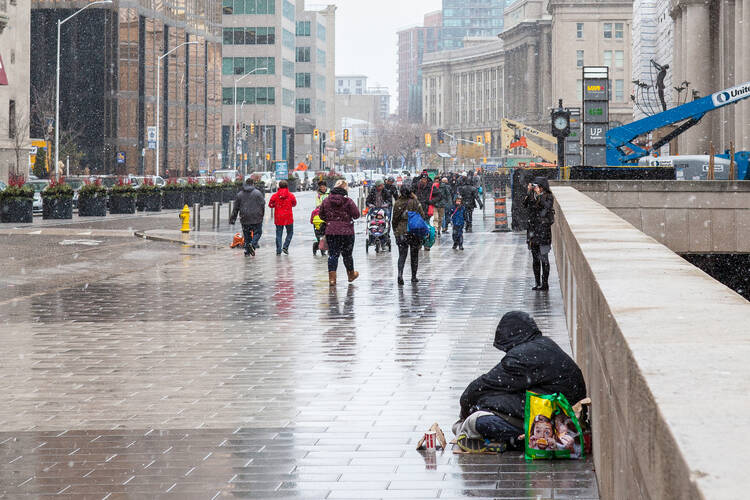 A man sits on a snowy street in Toronto, Ontario, Canada. In January, the city of Toronto began collecting data for the first time on deaths among its homeless population. (Photo via iStock)

With 49 million visitors to the Eaton Centre in 2015 and mobs streaming into City Hall each day to take care of civic business, it can be hard to notice the small, aging Anglican church sandwiched between the two institutions of commerce and government. On the second Tuesday of every month, however, the Church of the Holy Trinity is harder to miss. On those Tuesdays a group of friends, health care workers, advocates and others gather to hold a vigil for those who died homeless in the city in the previous month.

“Someone once described the church as a symbol of disruption,” said Holy Trinity’s parish priest, Sherman Hesselgrave, acknowledging the church’s peculiar geography. Amid all the foot traffic on June 13, three names, two Jane Does and one John Doe, were added to a memorial consisting of a list of names behind glass outside the church.

“Imagine the loss of dignity, being called ‘Jane Doe’!” said Don Weitz, an 86-year-old self-described “social justice and antipsychiatry activist,” after reading from a poem during the vigil. Mr. Weitz is a survivor of abuse in mental health clinics and said that knowing many other survivors of mental health clinics who are homeless is one reason the memorial is important to him.

Three names, two Jane Does and one John Doe, were added to a memorial consisting of a list of names behind glass outside the church.

The list of those remembered, cobbled together by a grassroots network of family, friends, and acquaintances, includes specific names, nicknames and the John and Jane Does added when a death is confirmed but no one is able to identify the deceased. During the vigil, a moment of silence is called by Janice Towndrow, once homeless herself, for these three most recently lost lives.

In January, the city of Toronto began collecting data for the first time on deaths among its homeless population. From January to March 27 deaths were recorded, more than two per week. In an e-mailed statement after the vigil, Dr. de Villa said that number could rise as the city continues to hear back from approximately 200 social and health services. Homeless people “are at greater risk for adverse health outcomes and contribute disproportionately to early death and other morbidities,” Dr. de Villa said.

Cathy Crowe, a street nurse and activist, said the official numbers suggest there could be three to four times as many deaths as those recorded at the memorial. “They’re not natural deaths. They’re violent deaths,” she said.

Bonnie Briggs, who works for a variety of community initiatives and delivered two poems at the vigil, founded the memorial. Now in her 60s, she got the idea in 1997, during her last year in college, where she studied community organizing. Ms. Briggs and her husband were once homeless themselves. Originally, she said, she wanted to have the memorial at Nathan Phillips Square, a plaza in front of New City Hall, but the memorial was not approved. “Political people don’t like being reminded of stuff like that,” she said.

Ms. Crowe, a regular blogger for the news site Rabble.ca, was glad the city officials came to the vigil, hoping they might learn from the anguish expressed there. “It’s not rocket science,” she said. “We can’t pretend we don’t know what the solutions are.”

But suspicion toward the government was evident among the crowd. Gesturing toward Mr. Mihevc and Dr. de Villa, Mr. Weitz described his frustration with the ongoing problem of homelessness in Toronto, especially the lack of government funding and subsidized housing to combat it.

“I’m getting so fed up and pissed off at the excuses from City Hall and Queen’s Park and Parliament Hill,” he said, referring to the sites of the municipal, provincial and federal governments. Those commemorated on the memorial should be alive, he said, and he hopes politicians will be more aggressive in advocating for solutions to homelessness. “You can be guilty of human rights violations by not speaking up.”

“I understand and share the feelings of anger and frustration,” said Mr. Mihevc, who also serves as chair of the Toronto Board of Health. “I can appreciate how they would feel particularly angry at the government.”

This is not his first time attending the vigil, which he described as a “disturbing event” that attests to the “tragedy of our time.” Mr. Mihevc insisted the city is committed to building more shelters, 15 over the next few years, but also to decreasing the need for shelters through the development of affordable housing.

A complex of socioeconomic challenges makes affordable public housing difficult, Mr. Mihevc explained. Building shelters, which have to meet specific requirements for the city, takes as long as 18 months. He also said that new difficulties emerge—most recently the influx of refugees coming from the United States and the increasing cost of rent in Toronto.

Though the June 13 vigil was politically charged, the event was primarily marked by personal rituals and tokens of solidarity, like the glass marbles distributed among the participants by Michael Mallard, whom everyone calls “Ducky.” The marbles were in honor of his friend Bev, who was told by her caseworker that she was losing her marbles because she preferred to sleep outside rather than in a place where she felt unsafe. Bev died on Valentine’s Day last year; her name is on the memorial.

Ducky made sure everyone at the vigil had a marble to keep in their pocket to remember someone in the memorial or someone they know who has died. “And now whenever someone tells you you’ve lost your marbles, you can say, ‘No, I’ve got them right here!’” he said.

As he passed them out, Ducky included empty bank deposit envelopes he uses as note paper, each with a scribbled plea to keep in mind the people who may one day end up on this memorial list, other Jane and John Does whose real names are in danger of being lost and forgotten.

What's frustrating to me are the Liberal big city dwellers who vote for Obama, Hillary, and Justin Trudeau many of whom are rich and drive very expensive import cars/SUVs and drink bottles of wine costing more than $20 routinely. I see it all the time. Some of these people will also spend $300 on their trendy glasses' frames. People should be helping the poor, not wasting money on worldly goods and secular/globalist urban life consumption. Obama isn't returning to Chicago to help the poor.

When we stand before God, hoping to enter into Heaven guided by His loving hands.

I wonder if He will invite all the Homeless we passed by and never
even spoke to, to stand near us. Not as Saints but as who they were when they asked for our simple charity. Yes, they may smell, they may ramble on, they might even invoke fear in us. Perhaps then, if only then, we might
realise that we should have embraced them during their lives and our lives as that is how you find your way and their way to Heaven. 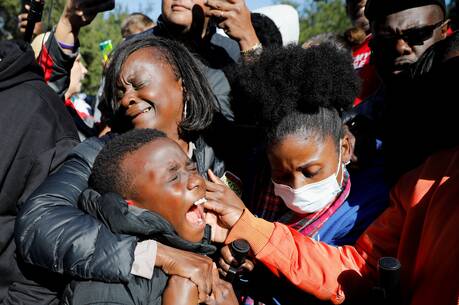