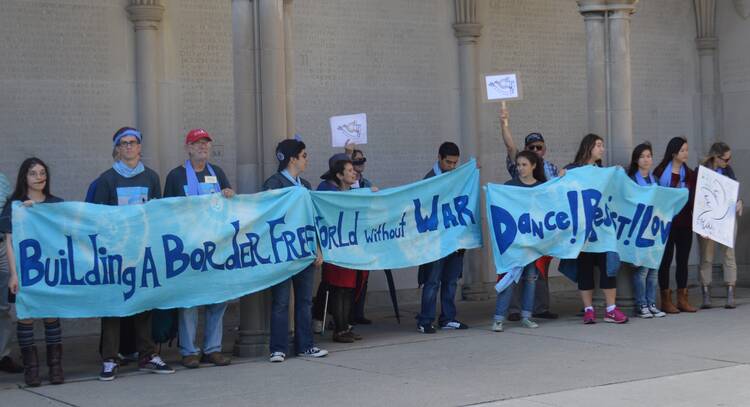 Pax Christi Toronto members gather in 2015 at the "Soldiers' Tower on campus at the University of Toronto, during its annual Peace Walk to mark The International Day of Peace. (Photo courtesy of Pamela Carriere)

For Catholics in North America, the peace movement offers some of the most compelling and challenging examples of faith in action. The footage of the Catonsville Nine burning stolen draft documents in a parking lot while saying the Lord’s Prayer is as powerful in an age of drone warfare as it was during the Vietnam War.

When Pope Francis delivered an address to the U.S. Congress in September 2015, he cited the examples of Dorothy Day and Thomas Merton, both prominent peace activists. These examples come from the United States, a nation often at the heart of global military interventions. But in neighboring Canada, a dedicated network of Catholic peacemakers has been hard at work building a movement for nonviolence.

“Eleven years ago I joined the group we now call Pax Christi Toronto,” says Larry Carriere, a former Passionist priest in Ontario. Inspired by a retreat with Father John Dear, a group of Toronto deacons and friends, originally called Catholics for Peace, began to think about how Canadian Catholics might respond to the challenge of peacemaking in their own country.

“I don't think peacemaking is a tough sell for people in Canada. Catholics want their church to be doing more to address poverty, inequality, violence and environmental degradation."

“At first we picked one global concern connected with Canada and one local concern in Toronto,” says Mr. Carriere. “The global concern wasn’t difficult in 2006 because Canada was involved in the war in Afghanistan. For our local concern we wanted to connect with young people, so we got involved with American war resisters who fled to Canada [rather than be redeployed to Iraq or Afghanistan], sort of like the Vietnam draft dodgers. At one time there were probably over 50 of them here in Toronto.”

After a few years of grassroots work, the group officially joined Pax Christi International, a Catholic movement for peace that began after World War II. The global network co-hosted an event at the Vatican last year that rejected the church’s just war tradition and called for a papal encyclical on nonviolence. Pax Christi Toronto is the only member of Pax Christi International in English Canada, with Montreal-based Antennes de Paix, or Antennas for Peace, marking a presence in Quebec.

Times have changed since Pax Christi Toronto first formed. Decreases in military spending under Prime Minister Justin Trudeau means Canada now spends 0.88 percent of its G.D.P. on defense, according to a recent Senate report. That means Canada is unlikely to meet its N.A.T.O. commitment to spend 2 percent of its G.D.P. on defense. That under-spending has drawn criticism from Canada’s Conservative opposition party and, not least, from U.S. President Trump, who criticized N.A.T.O. partner states for not spending more at N.A.T.O.’s Brussels headquarters on May 25th.

Citing his relationships with war resisters, however, Mr. Carriere says Canada is frustratingly slow to act on international military abuses. On the campaign trail in 2015, Mr. Trudeau said he would commit to looking into the fate of U.S. war resisters in Canada with compassion, but to date, they remain at risk of deportation. He voted for the Liberal Party in the federal election after a long, difficult process of discernment, but now he says he has become “very disappointed and disillusioned with the Trudeau government.”

Other blemishes taint the Liberal government’s record on international peacemaking. In 2016, the government came under scrutiny for its decision to defend a $15 billion arms deal with Saudi Arabia initiated by the previous Conservative government. Amnesty International charged that Canada was applying a “double standard,” given human rights abuses on the part of its trading partner. On Syria, the Liberals have followed the lead of the Trump administration, even in its inconsistencies, first continuing the Canadian policy of not backing a particular side in Syria’s civil war and then denouncing Syrian leader Bashar al-Assad in April after the United States launched dozens of missiles at a Syrian airbase.

That the Trudeau government has been following the Trump administration’s lead on significant foreign policy decisions is troubling for Canadian peacemakers, like Rosemary Keenan, a retired teacher and member of Pax Christi Toronto. “The U.S. has such a huge military investment around the globe. Being in the shadow of a neighbor like that, I think it’s important that we don’t get pulled into that attitude,” she says. “We are a separate nation. We are integrally tied in so many ways, but we have the opportunity and responsibility to take a different stance.”

It is that different stance that Pax Christi Toronto has been actively trying to cultivate. In addition to the usual activist tasks of organizing demonstrations, advocacy work and building coalitions with other peacemaking groups, Pax Christi Toronto is also finding ways to engage local Catholic parishes and religious communities. In order to highlight Canadian models of peace, the group created the Teacher of Peace Award, first given to Sister Mary Alban in 2013. Ms. Keenan says the group is not alone, however, and that they try to support the Canadian bishops, who she says are also addressing Canada on justice issues.

The movement has its challenges. “It seems to me Pax Christi is not well known in Canada, particularly in English Canada,” says Ms. Keenan, though she adds that internationally the organization is gaining steam. “Are we struggling? Yes, in a good way. We are blessed with a membership of dedicated volunteers, each connected with peace and justice work in addition to Pax Christi. We have worked together to develop monthly actions and a series of outreach events, and we continue to build partnerships.”

Many of those partnerships are oriented toward a younger crowd, like the Student Christian Movement. “We must go where the youth are, support them, empower them, and follow their lead,” says Ms. Keenan.

Ms. Keenan and Mr. Carriere both agree that in addition to advocacy work in Canadian society, the church, too, has to take a hard look at its own history of violence and needs to make physical and emotional space for these conversations. “Many people who are in Catholic parishes and congregations here in Toronto are coming from areas of conflict,” says Ms. Keenan, “but there is not a forum for discussion yet in our parishes. Once that begins and is sanctioned by church leadership, it won’t be easy, but the conversations will grow.”

“I don't think peacemaking is a tough sell for people in Canada,” Ms. Keenan says, adding she thinks Pax Christi has a hopeful future in the country. “I believe Catholics want their church to be doing more to address poverty, inequality, violence and environmental degradation. The church needs to be structured to make that happen; and to work with Religious Orders and other peace partners.”