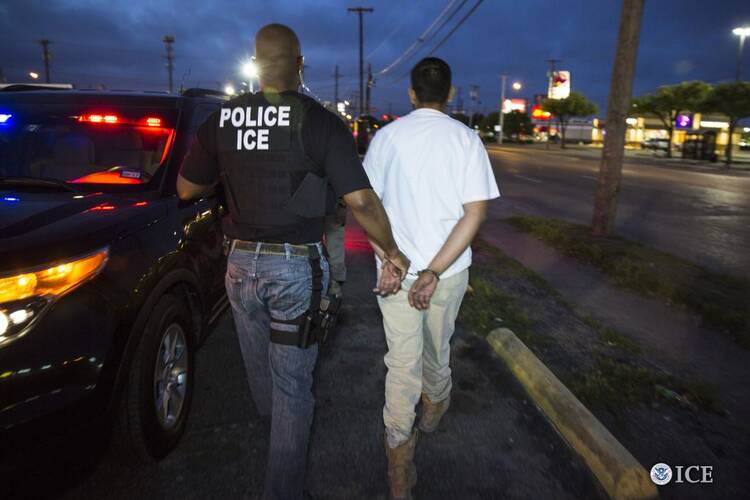 Cardinal Joseph Tobin of Newark called on President Trump and Congress to pass comprehensive immigration reform in an address in Brooklyn during which he urged solidarity with people facing deportation.

“You really have to believe in inflicting cruelty on innocent people to choose to support the policies we’ve seen in recent months while possessing the power to change the law,” Cardinal Tobin said.

Christian virtues of grace and mercy should drive lawmakers to rethink how the United States treats immigrants, according to the cardinal. He said Republican control of the U.S. executive and legislative branches of government represented essentially one-party rule, putting G.O.P. politicians in a unique position to pass comprehensive reform, if they had the will to do so.

“They could bring nearly 12 million people out of the shadows, if they wanted to,” Cardinal Tobin said. “This isn’t about border security. It’s about being attentive to the reality of people who are already in our communities.”

“They could bring nearly 12 million people out of the shadows, if they wanted to,” Cardinal Tobin said

Cardinal Tobin spoke at the Diocese of Brooklyn's annual World Communications Day on May 17, where he received the St. Francis de Sales distinguished communicator award. Just a few hours before he delivered the keynote address at the conference, the U.S. Immigration and Customs Enforcement agency reported that in the 100 days since Mr. Trump issued new executive orders on immigration enforcement priorities, ICE agents had arrested more than 41,000 individuals “who are either known or suspected of being in the country illegally,” an increase of 37.6 percent over the same period in 2016.

Cardinal Tobin, the leader of New Jersey's largest archdiocese, is known as an immigrant rights advocate and an outspoken critic of Mr. Trump's immigration policies. He joined a lobbying effort in Washington, D.C., of nearly 1,000 business leaders and politicians against the president's moves in February. At the time, Cardinal Tobin called Mr. Trump’s temporary immigration ban on seven Muslim-majority countries “misbegotten” and “demonizing.”

In March, he led a rally of several dozen clergy members to support Catalino Guerrero at his deportation hearing. The 59-year-old Mr. Guerrero, who entered the United States illegally in 1991 and later applied for asylum, was granted a one-year extension on his stay in April.

“The service of communicating hope today begins with putting a face on apparently hopeless situations, situations like Catalino’s, who without the solidarity of his brothers and sisters, might well have been taken away from his wife and four children and their grandchildren,” Cardinal Tobin said.

His decision to accompany Mr. Guerrero represented more than making a difference for one person, Cardinal Tobin said. The act put a face on the deportation debate and helped others understand the plight and fear of immigrants in the United States today, according to the cardinal, who added a similar gesture is something every cardinal, bishop or city mayor could do. Well meaning people, even religious people, can ignore the realities of their neighbors, he said.

This sense of facelessness is perpetuated by politicians, as well as members of the news media. When the for-profit media chase ratings, they can lose sight of an important responsibility to inform the public, Cardinal Tobin said. He added that faith must lead us to act on behalf of others to spread hope, as Pope Francis said in his World Communications Day message.

“As Christians, we have no option but to be disciples of hope,” Cardinal Tobin said. “I suggest that the way we do that is by putting a face on people and situations that are rendered faceless or whose faces have been distorted.”

Wyatt Massey is an O'Hare Fellow at America magazine.

Dear Cardinal,
Have you lived in other Countries? How many places offer citizenship and protection to those who have entered and/or stayed illegally? Why haven't they applied for citizenship? How many have committed horrible crimes? Do you see the horrors in some of our schools? Do you know families who have been harmed---by everything from chaos in the classroom to gang murder and rape? Do you know families from all over the world who have come here legally, attained citizenship and worked for years to bring over other relatives---legally! Pray for all---but restore the sovereignty of our Nation.

Finally we have a USA Bishop and Cardinal who willingly speaks aloud truth to power! And does it by action, not just words.

His description of the one-party Republican control of government and its inertia in initiating immigration reform serves as a reminder to those Catholics among them, especially Speaker Ryan, that there is a moral obligation that they fail to observe.

It has become increasingly obvious as well that the undocumented immigrants being targeted and arrested are overwhelmingly Hispanic, ignoring the large numbers of European, Asian, and others who remain in the country unmolested.

The nation’s immigration policies have become bigoted and racially, ethnically, and religiously discriminatory, in the name of a safety and security that is overblown and political propaganda. And these undocumented immigrants are not taking jobs from USA citizens. The farmers in California are begging for workers and no USA citizens are rushing to the jobs!

So much for the myth of a Judeo-Christian foundation to the nation and "American exceptionalism"!

Vince
You and the Cardinal seem to forget that Barack Obama promised over 8 years ago to "fix the immigration problem " in his first year. Then when the Democrats controlled both houses of Congress and the Presidency, they chose to "fix" other matters and ignored the immigration problem entirely , and later blaming the Republicans when they did not even need those votes. Tar Baby Time!

Stuart,
Your version of history has that Roger Ailes slant to it…it fits your political preferences. Probably the best example of why things don’t get done is the current inertia of the Republicans to deliver any meaningful legislation on anything in the past four months! And they blame the Democrats for being unwilling to provide the necessary votes to assure majority. Sound familiar? Sounds very much like your explanation for Democrat inertia on immigration reform. The only difference is that Obama kept speaking to the issue. We’ll never hear that from Trump nor that Catholic darling of the Bishops, Speaker Ryan.

I don’t see any challenges to my comments about the bias being demonstrated with regard to the ouster of undocumented immigrants. I lived in a neighborhood for many years of my life that was filled with undocumented Irish, many of whom wound up in high paying union jobs, no less, that minority citizens couldn’t have. I hear no outrage about that.

Vince
My reference to "the Tar Baby" covers the entirety of your original observation and the non stop hypocrisy on all sides of the aisle
You had commented the issue of failure to reform the immigration laws belongs on the Republican side.
"My slant", as you call it, was to point out that you forgot to mention the prior Democratic "inertia on immigration reform" under identical circumstances of full political control with President Obama ..... hence The Tar Baby reference.

As for your comment concerning the Irish vs other undocumented ethnic incursions in violation of the law: you need to remember that the vast numbers of Irish arrived between 1845-1852 which is well prior to the Supreme Court announced Federal supremacy on immigration in 1875 . Very loose Federal control followed until about 1952 under the Immigration and Naturalization Act, modified in 1965 with elimination of national source based quotas and again in 1986 with the Immigration Control Act. The number of Irish arriving after 1952 is miniscule compared to the 11 Million plus migrants from Latin America during that period. Further those Irish arrived mostly unnoticed because the Irish political machine in the major east coast cities quickly found work for those post potato failure Irish immigrants ....if only because it increased their voting block. I believe it is an understatement to say that the Irish political machine is reliably Democratic .
National Democrats of today continue to pursue the same agenda ...i.e., development of a voting block among Hispanics. Papering over that point with your references to "ethnic and racial bias" needs to be viewed in that context. It is much like Chris Mathews attributing every objection to Obama legislation as being "racially motivated".
If Republicans could curry favor to develop a voting block they would do the same.
Enforcement of the Immigration laws is vested in the Executive Branch: Obama/Holder simply chose not to enforce those laws rather than get legislation to change those laws. The Trump/Sessions administration ran on the enforcement of the existing laws and was elected in large measure on that platform. So I ask you: if an Executive refuses to enforce existing laws is he more or less "biased" than than the Executive who enforces existing laws? As I stated: it's a Tar Baby

Tad bit late. I do not know but suspect the good Cardinal uselessly sat aside during the presidential elections and allowed abortion to be the issue for Catholic electorate. Now he wants change from what Trump advocated?