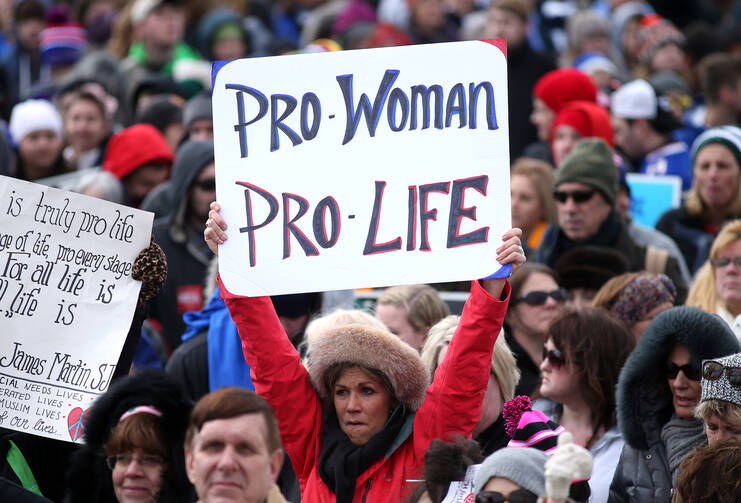 My conversion to the pro-life cause began, strangely enough, when I took part in a pro-choice march in the spring of 1992. Along with thousands of other college students, I traveled to Washington, D.C., that April to participate in a demonstration organized by the National Organization for Women. Planned Parenthood v. Casey was pending before the U.S. Supreme Court and the presidential election was in full swing; pro-choice activists wanted to flex their political muscle, while pro-choice politicians wanted to brandish their liberal bona fides. Thus 400,000 of us gathered on the National Mall, most of us waving signs that read, “I am the face of pro-choice America.”

In those days, I was. Twenty years old and an undergraduate at the University of Massachusetts Amherst, I was a devout left-winger and one very angry, nonpracticing Catholic. The church, I thought, was oppressive, backward and petty; I wanted nothing to do with it. I was searching for something else—for love, of course, but more than that, I was searching for the Truth, the Great Idea that would organize my life and work. I thought I’d found it in the peculiar brand of liberalism I encountered at UMass: radical democratic socialism, identity politics and a form of bourgeois activism that seemed anachronistic even then. (Don’t get me wrong: I am a proud son of UMass. I received a great education there, and the friends I had in college helped make me the moderately decent human being I am today.)

Which brings me to a parking lot at the Pentagon, where I’d come to catch a ride back to Massachusetts after a day of marching. As I headed toward our chartered, battered Greyhound, I had an epiphany. All along Pennsylvania Avenue, I’d had conversations with women from every region of America. Obviously, I’d talked with women before, but never like this. Most of the marchers were women; and there was something about being in that enormous crowd of women that gave them the motivation and the freedom to talk about their lives in a totally transparent way. We hardly mentioned abortion. Instead, we spoke about the obstacles they encountered daily—at home, in the workplace, in the classroom; the manifold injustices, large and small, that come from living in a society that is often hostile, or simply indifferent, to women’s hopes.

I learned for the first time how women at home and abroad suffer indignities and forms of social oppression that I will never experience as a man, injustices that violate their inherent worth and dignity.

My eyes began to open. I started to see these women and, especially, the women closest to me, in a new light. I began to see how I was a part of the problem; how I had been unconsciously complicit in the injustices they described; how I had too often discounted their views, their talents, their challenges. Feminists might describe what I experienced that day as “consciousness raising.” That it was. I learned for the first time how women at home and abroad suffer indignities and forms of social oppression that I will never experience as a man, injustices that violate their inherent worth and dignity.

This was all on my mind when I arrived at the Pentagon. In typical fashion, I was late and rushing. As I tried to jump up the three short steps in the front of the bus, I tripped and landed flat on my face. When I looked up, there was a woman standing in front of me, offering her hand. I didn’t notice her gesture at first because I was blindsided by the big black letters on her white T-shirt, which read: “Abortion on Demand and Without Apology.”

In an instant, something broke loose in my conscience. The words on her shirt were blunt, emphatic, unequivocal. If they were meant to provoke, they had. Yes, I had just marched in a pro-choice demonstration, chanting all kinds of rhythmic, unnuanced, absurdities. But this felt different. These words were devoid of the very moral claim that I had just encountered. The women I had spoken with during the march had made it clear to me in a radically new way: It is manifestly unjust to treat anyone as less than fully human. Now on the floor of our Greyhound, a new question: Doesn’t the human life in a woman’s womb deserve that same consideration? Are not a mother and her unborn daughter both human beings, with an inherent dignity no one can ever revoke?

I pondered these questions for a couple of years before I fully embraced the pro-life cause, a reminder that the journey to truth is often circuitous and it’s patently unhelpful to simply stress what we think is the obviousness of our claim. In time, of course, I returned to the church—in dramatic fashion! But in a curious, paradoxical twist, it was not the church that set me on the path to pro-life activism. It was those women among the marchers 25 years ago this spring who first raised my consciousness about the realities of sexism and injustice and, in doing so, inadvertently roused my conscience to see the worth of every human life.

This is an excellent commentary by Fr. Malone. Proof that paradigmatic shifts in one's beliefs can happen. The accompanying video "Pro-Life Millenials Speak Out" is also excellent.

But why use their terminology "pro-choice" which surrenders to a certain deceit: are the so called pc activists really marching and carrying on for the choice to have the baby?? Quite the opposite. They are pro-abortion and many of them look at this as a point of equality with men as sad as that type of notion of equality may be. They should be called pro-abortion.

This is an interesting, thoughtful article. My question would be, "How is your pro-life activism expressed?" I can see plenty of room for the Church to be far more pro-life than it currently is - and without taking the usual repressive "Father knows best" attitude.

THE CHRISTOFFERSONS
5 years 6 months ago

You speak eloquently about conversion, but I wonder whether this topic is still too caught up in arguments about ownership of catch phrases like "pro-life" and "pro-choice". These ownership arguments reflect the highly partisan character of the public discussion. Partisans are pushing positions rather than engaging in dialogue.

It is ironic that the Supreme Court's opinion in Roe v. Wade remains a solid foundation for dialogue. Justice Blackmun's carefully researched opinion has a place for everyone, without any hint of rancor. There were those who argued for an unlimited position, stated on T-shirts as "abortion on demand and without apology", as you noted. The Supreme Court acknowledged that contention, and expressly rejected it. Roe v. Wade, 410 US 113 (1973), at pp. 153-154. There were also those who contended that life begins at conception and therefore the unborn are protected by the 14th Amendment. The Court also acknowledged and rejected this contention, noting the wide divergence of thinking and the lack of a legal consensus on when the fetus becomes a person. Roe v. Wade, at pp. 161-163. The opinion expressly acknowledged that the Catholic Church believes life begins at conception, noting that this doctrinal clarity was not present in the Middle Ages when Aristotle's "mediate animation" held sway in Church dogma.

One would hope that our politics is capable of better. We need to make room for dialogue. See Ecclesiam Suam, #13 and Part III. People are not as far apart as the polarized politics suggests. Your own story, and moving account of "the women who marched", suggests as much.