How the New Wave Feminists are changing the conversation around abortion 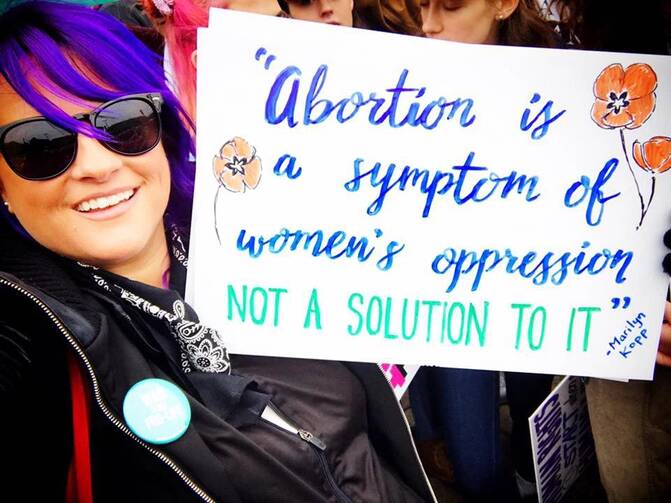 In 2004, Destiny Herndon-De La Rosa founded New Wave Feminists, a pro-life feminist organization dedicated to changing the divisive language surrounding the abortion debate. New Wave works to give women the support and resources needed to make motherhood a feasible option. Destiny was inspired to form the pro-life feminist organization by her own experience as a young mother.

We talk to Destiny about her advocacy and how to create dialogue within and outside the pro-life feminist movement.

In Signs of the Times, the president and the Catholic Church battle over La Lomita Chapel on the U.S.-Mexico border. In sex abuse news, the Northeast Province of the Jesuits release the names of all clergy accused of sexual abuse since 1950. A new Gallup survey says the crisis has led Catholics to lose faith in church leaders.

We remember the life of Bishop Joseph Howze, the first black bishop to lead a U.S. diocese, who died at the age of 95 on Jan. 9. In international news, a new art exhibit featuring a crucified Ronald McDonald angers Christians in Israel. Finally, the Vatican officially launches a new track team, which includes nuns, priests and migrants.

Feel free to send us your questions, concerns or cocktail recipes to jesuitical@americamedia.rog, or join us for discussion on Facebook and follow us on Twitter. Consider supporting Jesuitical by becoming a member of our Patreon community. Next week, we will be in Australia and you can follow along on Patreon and social media!

Women are allowed to get away with things men are not. You should be aware of that by now. Men self police each others behavior but a lot of men allow women to get away with anything, just for a whiff check her whatsapp status here https://500px.com/davinben5248
.

? I’m trying to figure if there is a category to put your comment into? Clueless? Misogynist? Beer bro-ism?
Incel? I’m at at loss.

Per the sign in pic is a symptom of oppression? Really? How dumb can these feminists be?