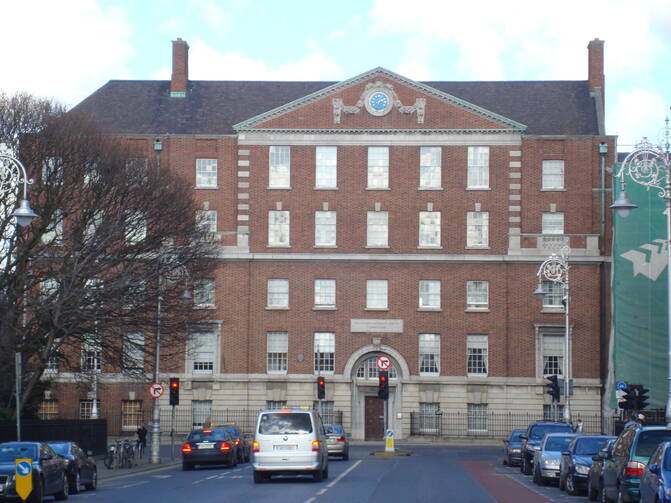 Ireland’s former Prime Minister Bertie Ahern once summed up the Irish attitude to building national infrastructure: “If there’s not a 10-year row about a project,” he said, “it’s not worth doing.”

If you apply this logic to to Ireland’s new National Maternity Hospital, it would prove a very worthy project indeed. Planning permission was finally lodged earlier this month for construction to begin on the new facility, ending years of delays and negotiations.

The fact that the government handed ownership of a new $330 million state hospital to a religious order has led to a national debate over the continued involvement of the Catholic Church in Ireland’s health care system.

The fact that the government handed ownership of a new $330 million state hospital to a religious order has led to a national debate over the continued involvement of the Catholic Church in Ireland’s health care system. A member of the of the National Maternity Hospital board, Peter Boylan, publicly opposed the deal, raising concern over whether procedures that contradict Catholic teaching—including dispensing contraception, sterilization, in vitro fertilization, gender reassignment surgery and therapeutic abortion (allowed in Ireland when the mother’s life is endangered)—would be permitted in the new hospital.

The current master of the National Maternity Hospital, Rhona Mahoney, insisted there is a “triple lock” to ensure clinical independence and that “nuns will not be running the hospital.” Amid the ongoing dispute, Mr. Boylan resigned from the board. The minister for health has promised to review the deal but stressed the urgency of the project and his commitment to building it on the St. Vincent’s site.

The matter of religious ethos in public hospitals in Ireland has been rumbling for some time. The Sisters of Mercy and Sisters of Charity still own two of Ireland’s biggest hospitals, the Mater and St. Vincent’s. They have both said the hospitals are run independently, without religious constraints. Anecdotal reports have emerged in various news outlets, however, of urologists at St. Vincent’s Hospital not being permitted to perform vasectomies for the sole purpose of contraception or family planning. Gynecologists also claimed the same was true of tubal ligation, which meant that doctors referred patients elsewhere for the procedure.

The controversy over the new hospital has coincided with a significant recommendation from Ireland’s Citizen’s Assembly, an advisory group convened to examine, among other things, Ireland’s abortion law. On Saturday it recommended to the national legislature that it provide for a referendum to change the article in the Irish Constitution that prohibits abortion in almost all cases. If Ireland’s abortion laws were to be changed and liberalized, it would create further complexities for the church-owned National Maternity Hospital.

Critics have urged the Sisters of Charity to give or sell the land to the state, thereby ending any uncertainty. They have also pointed to a government report published last month that found the order has to date paid only 2 million euros of the 5 million euros they pledged toward the state’s redress scheme for victims of institutional abuse.

The involvement of religious orders in the health care of women has a long and increasingly painful history in Ireland. The Sisters of Charity themselves ran five residential schools as far back as the 19th century where abuses were documented as well as the now infamous Magdalene Laundries, where “fallen women” were often placed if they had children or engaged in sexual behavior before marriage.

In March, a commission of investigation found the remains of children in a disused septic tank at a former mother and baby home in Tuam, County Galway. Prime Minister Enda Kenny said that the revelations concern not only a potential mass grave but “a social and cultural sepulchre.” It is a time the church, the state and the public are keen to move past. The debate over the National Maternity Hospital continues.

The Citizen's Assembly has essentially recommended the removal of all human rights from the unborn & near-born, permitting Abortion-on-demand right up to birth. They even discussed the problem of some babies/foetuses over 22 weeks old surviving the abortion attempt and the need to kill them by injecting potassium chloride (since the goal of an abortion is a dead human being, not just an end to pregnancy). See this article from the Irish Times from Brenda O’Brien last week.
http://www.irishtimes.com/opinion/citizens-assembly-shows-its-callousness-in-abortion-vote-1.3065123

As an aside, the Tuam events are not at all being properly characterized by the media (including the septic tank nomenclature) and there is as yet no certainty on any mistreatment of dead bodies. See here http://www.irishcatholic.ie/article/better-honoured-death-life

I have a number of comments on this issue on the Association of Catholic priests website in Ireland. An extract from one comment follows:
http://www.associationofcatholicpriests.ie/2017/05/the-new-national-maternity-hospital-and-the-religious-sisters-of-charity/
"...I wonder what would have been the attitude of Jews if they had been attacked in similar fashion? Suppose that a Jewish group had offered to donate land for a hospital under precisely the same conditions as those agreed in November 2016 between Holles St and St Vincents. Suppose that the media and politicians erupted with hate-filled lies – including claims that the Jewish group committed “atrocities” against children, “experimented on [a child] for vaccine trials” and owed the State €3 million. Suppose that the Government Ministers responsible failed to defend the Jewish group against the lies and it was left up to a Daily Mail journalist to find out – via a Freedom of Information request – that the Jewish group owed nothing and had actually overpaid!

"Of course, one reason that this would never happen is that the Jewish group would immediately defend its slandered members and take legal action against those responsible. Anti-Semites know this and are very mindful of the risks they would be facing. (For a recent illustration of this process at work try googling the names of the late Lord Greville Janner and his son Queen’s Counsel, Daniel Janner. One article you will find in ‘Police Professional’ on 30 May 2017 is headed “Historical Abuse Accusers Drop Claims against Lord Janner.”)...."

MY COMMENT TODAY (15 June): Anti-clericalism is a hate-filled ideology very similar to anti-Semitism. Catholic clergy and Religious should drop the apologetic approach and react the same way that the family of the late Lord Janner did.