We can, and must, defeat famine in Africa 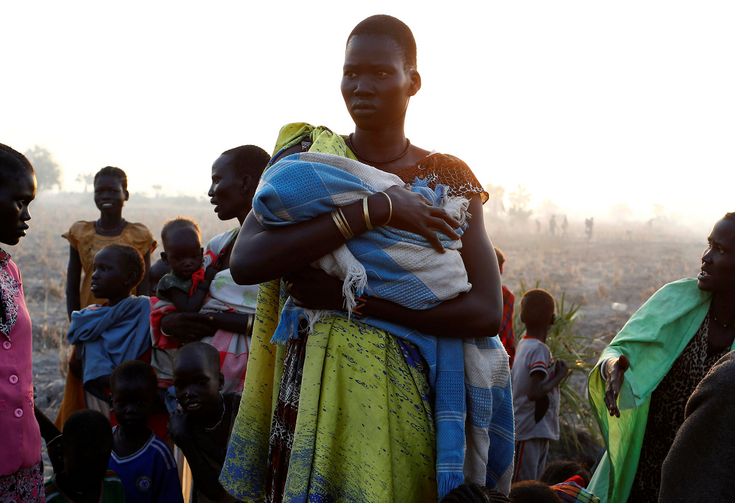 A woman in Thonyor, South Sudan, holds a child while waiting to be registered for a food distribution Feb. 26. The United Nations declared the first famine since 2011 on Feb. 20 in parts of the war-torn country. (CNS photo/Siegfried Modola, Reuters)

Last week my attention was captured by a photo making the rounds on the internet of an elderly man listening to a gramophone in the rubble of his bombed-out home in Aleppo, Syria. The haunting image personalized the devastation of war, and the fragility of human civilization, more powerfully than words could.

The world seems battered by misery right now, with so many refugees fleeing violence and war and now millions of people at risk of famine in Africa and the Middle East. Famine has already been declared in parts of South Sudan; Nigeria, Yemen and Somalia are on the brink of it. The United Nations has announced that 20 million people are in danger of starvation, making it the worst humanitarian crisis since the international body was founded, and it is seeking $4.4 billion by July to prevent widespread deaths.

During the last 50 years, there has been great progress in reducing famine and extreme poverty. Thanks to advances in agriculture, we live in a world with enough food for everyone. Except for Somalia, where sustained drought conditions are contributing to food shortages and waterborne illnesses affecting 6 million people, none of the countries endangered by famine are experiencing food shortages because of weather. The food emergencies in Nigeria, Yemen and Somalia are entirely driven by conflict, which plays a large role in Somalia’s food shortage as well. The International Committee of the Red Cross has said that the situation in all four countries is “verging on catastrophic.”

The food emergencies in Nigeria, Yemen and Somalia are entirely driven by conflict.

In South Sudan, independent since 2013, a conflict that broke out between factions of the new government has led to all-out civil war. Now the warring parties are blocking aid workers from supplying humanitarian relief to the 40 percent of South Sudan’s 12 million population deemed “food insecure.” According to a U.N. tally, 80 times a month planes are not receiving permits to bring emergency food and medical supplies to the South Sudanese population.

In Nigeria, where the conflict between the country’s regional governments and Boko Haram extremists is going into its eighth year, Unicef has warned that hundreds of thousands of children in the northeast region will suffer from acute malnutrition this year. Scott Paul, senior humanitarian policy advisor for Oxfam, which provides aid in Nigeria and other countries threatened by famine, said the government and the military are exacerbating the crisis by closing farms, fisheries, riverine areas and markets where food can be bought.

The most critical food emergency is in Yemen, where 17 million people are food insecure and 7 million are on the verge of famine. The United States is supporting Saudi Arabia’s war on the Houthi rebels there, a war that has been disastrous for Yemen’s civilians and shows no sign of ending. All parties to the conflict politicize aid and arbitrarily prevent sustained humanitarian access, Stephen O’Brien, U.N. Under-Secretary General for Humanitarian Affairs, told the Security Council after visiting Yemen in March.

The United States could stop its support for the war in Yemen. Especially there and in Nigeria, it could use its leverage to curb human rights abuses and improve people’s access to food aid. Last week’s military strike on a Syrian airbase was said to have been prompted by Trump’s shock at seeing images of children choking to death in a chemical weapons attack attributed to the Syrian government. One question that arises: Is the president as prepared to employ peaceful means to save the lives of innocent children as he is to to avenge dead ones with lethal military strikes?

The United States spends less than one percent of its budget on foreign aid.

The budget the president sent to Congress contains deep cuts to foreign aid during a time of unparalleled need in the world. The United States spends less than one percent of its budget on foreign aid, which include both humanitarian and military assistance. Trump’s budget proposal leaves military aid intact while slashing funds for humanitarian relief. Both Republicans and Democrats in Congress have decried this, making humanitarian aid one of the few areas where there appears to be bipartisan opposition to the president’s policy, which if adopted would alter America’s role as the world’s largest emergency aid donor.

As elections approach, will Liberia be able to keep its peace?
Kevin Clarke

Yet even with congressional pushback, this is not an auspicious time to be launching international appeals to aid those at risk of starvation. Americans are focused inward these days, consumed by our own polarized politics. But the needs of desperate people do not disappear because we are preoccupied.

Magnanimity is not a virtue I associate with hungry people, but Oxfam’s Scott Paul used that word to describe the behavior of those Oxfam is helping.

How tragic for the world, and for ourselves, if Americans fail to muster a corresponding generosity of spirit.

Please stop the overt politicization of hunger by blaming Trump. He has/had nothing to do with it nor can he necessarily cure it. It gets tiring.