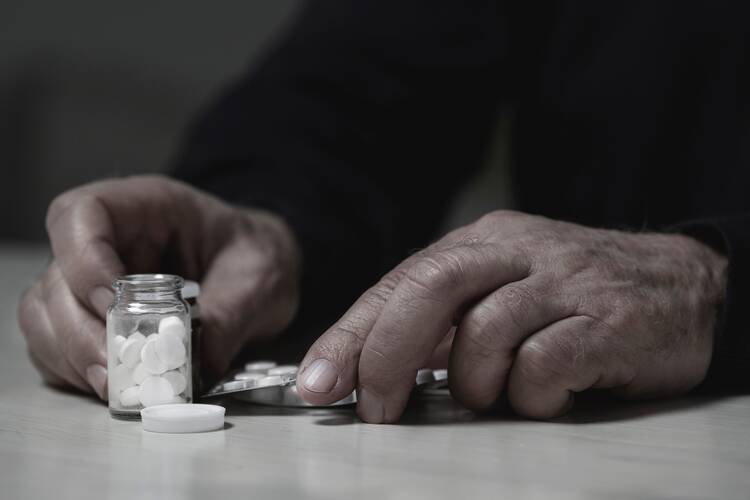 More states are considering assisted suicide legislation, although few seem to be making inroads in adding themselves to the five states and the District of Columbia where it is legal.

A bill in Alaska closely modeled after Oregon's Death With Dignity Act, which took effect 20 years ago, was the subject of a legislative hearing April 6. But lawmakers in a divided Legislature are in session for only 90 days, and coming to agreement on a state budget appeared to be taking up lawmakers' time.

At a March 28 hearing on the bill, Margaret Dore, an attorney from Washington state where assisted suicide is also legal, said advocates of doctor-assisted suicide are misleading the public about the real impact on society's most vulnerable. Dore, who also is president of Choice Is an Illusion—a nonprofit that opposes assisted suicide and euthanasia—said the bill does not deal only with those who are dying. For example, Oregon's suicide bill lists diabetes as a "terminal illness," Dore cautioned.

In addition to Oregon, Washington state and the District of Columbia, assisted suicide is also legal in California, Colorado and Vermont.

Arizona lawmakers passed a bill in March that would protect state health care providers and medical facilities from discrimination if they refuse to assist in services or provide items that result in the death of a person. The bill is meant to shield doctors, nurses or medical facilities that choose to exercise personal conscience in not participating in end-of-life situations.

Although Colorado voters approved a medical aid-in-dying referendum last year, within two months of the vote, around one-third of hospitals in Colorado had decided to opt out of offering medical aid in dying, including the state's largest health system, Centura Health.

In Hawaii, the state house's Health Committee in March unanimously voted to defer a bill that would have legalized physician-assisted suicide for terminally ill patients two weeks after the Senate had overwhelmingly voted in favor of the bill.

The Catholic Church in Hawaii actively opposed the bill, including action by the Hawaii Catholic Conference and Bishop Larry Silva of the statewide Diocese of Honolulu, who called physician-assisted suicide a "wolf in sheep's clothing" and "another manifestation ... of the 'culture of death,'" adding his concern that legalizing assisted suicide would open the door to a "culture of euthanasia" and abuse of the elderly.

The Catholic Church in Hawaii actively opposed the bill, including action by the Hawaii Catholic Conference and Bishop Larry Silva of the statewide Diocese of Honolulu.

A similar bill was introduced in Iowa by two Senate Democrats, but it has little chance of succeeding in a Republican-dominated Legislature.

Companion bills were introduced in both houses of Indiana's Legislature to prove "end-of-life options." The bills allow an individual with a terminal illness who meets certain requirements to make a written request to an attending physician for medication that the individual may self-administer to die. It also specifies requirements a physician must meet to prescribe the medication to a patient. However, no action had yet been taken on the bills.

Kansas' Death With Dignity bill also is modeled closely on Oregon's law. A patient requesting aid-in-dying medication will have to be at least 18 years old, a Kansas resident, mentally capable of making and communicating health care decisions, and diagnosed with a terminal disease that will result in death within six months.

In Maine, dozens of people turned out on April 5 to argue for and against a pair of bills that would allow Maine doctors to prescribe life-ending drugs to those suffering from terminal illness. One proposal, sponsored by Republican State Sen. Roger Katz, is similar to a law passed by Vermont in 2013, and to a bill that was rejected narrowly by the Maine Legislature in 2015. The other bill, sponsored by Democratic State Rep. Jennifer Parker, would allow a doctor to prescribe and a patient to self-administer a lethal medication to end the patient's life.

The two sponsors of Maryland's End of Life Option Act withdrew the bill in March when they realized they did not have the votes to pass it in the Senate Judicial Proceedings Committee. The Maryland Catholic Conference was among the opponents of the measure; the conference is part of the Maryland Against Physician Assisted Suicide coalition.

Assisted suicide advocates in Massachusetts are trying for the eighth time to get a bill passed. Companion bills were introduced in the winter. The state's legislative session runs through 2018.

A bill was reintroduced in the Minnesota Legislature to give terminally ill patients access to medication to end their lives—but the measure has little chance of passing. Minnesota Citizens Concerned for Life warned that passing the bill would open the door to new kinds of pressure and coercion, citing Oregon statistics the organization says shows that 40 percent of those obtaining life-ending medications have expressed concern about being a burden on family and friends.

Competing bills were introduced in Mississippi: a Death With Dignity Act, and a bill that declares that "no person shall receive a prescription for medication to end his or her life."

An independent lawmaker in Nebraska's unicameral Legislature introduced the Patient Choice at End of Life Act, which was identical to a bill he submitted in 2016. The Judiciary Committee split 4-4 on it after Gov. Pete Ricketts tweeted that he opposed assisted suicide, effectively killing the bill.

Four House Democrats, and a group of Democrats, Republicans and independent senators in Nevada introduced an aid-in-dying bill in March. The bill was referred to the Senate Health and Human Services Committee.

New Jersey may be the closest to being the next jurisdiction to allow assisted suicide. A bill passed the full House last fall during the 2016-17 legislative session, and then was approved by a Senate committee in November.

After New Mexico's Supreme Court ruled against the right to die last year by refusing to overturn a law making it a felony to help end the life of a terminally ill patient, lawmakers tried again. An End of Life Options Act was introduced in the state House in January and approved by the House Health and Human Services Committee the next week. A companion Senate bill voted on by the Senate Public Affairs Committee on March 3. It was taken up by the full Senate and defeated 22-20 in a late night vote on March 15.

Lawmakers in North Carolina and Ohio said they would introduce similar legislation in 2017.

In Oklahoma, one bill, the Death Certificate Accuracy Act, introduced in January, would require listing "suicide" as the cause of death under any assisted dying law that may pass in the future. It has passed the House and was pending in the Senate Health and Human Services Committee.

In Pennsylvania, two state senators introduced the Pennsylvania Death With Dignity Act in January. The bill was immediately referred to the Senate Judiciary Committee, where no assisted suicide bill has made it out of committee since at least 2007.

Utah's End of Life Options Act, introduced in January, the bill was tabled in the House Health and Human Services Committee on a 9-3 vote, which effectively ended its progress.

In Wisconsin, a day after the state passed a measure allowing the terminally ill to have access to experimental drugs that have not yet been approved for use by the federal Food and Drug Administration, an aid-in-dying bill was introduced. Its fate is uncertain.