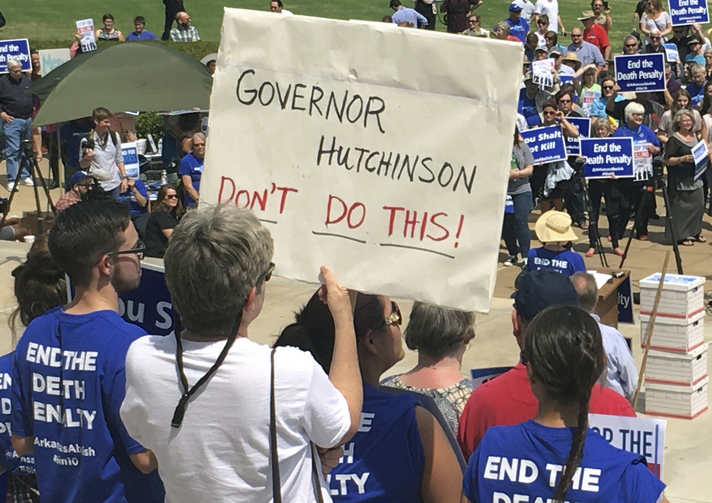 A federal judge on Saturday halted Arkansas' unprecedented plan to execute several inmates before the end of the month because one of its execution drugs is about to expire.

U.S. District Judge Kristine Baker granted a preliminary injunction requested by the inmates to block the executions. Arkansas was set to execute the first two of six inmates by lethal injection on Monday night. The state is expected to appeal the decision.

Arkansas intends to use the surgical sedative midazolam to mask the effects of drugs that stop the lungs and heart. In her order, Baker cited troubled lengthy executions in Alabama, Arizona, Ohio and Oklahoma that used the drug. Some states have barred the use of the drug, and courts have reached different decisions on what inmates would have to do to suggest alternative means of execution.

The judge also faulted the state's policy of not letting lawyers have access to the inmates at the time of their deaths and said the inmates could raise challenges about the drugs to be used.

"The court is mindful of the fact that the state of Arkansas has not executed an inmate since 2005, despite consistent support for capital punishment for Arkansawyers and their elected representatives," Baker wrote. She said the relatives of victims have waited for years to see executions, but, "by this order, that day is delayed again."

"These thoughts weigh heavily on the court, but the court has a responsibility to uphold the Constitution. After hearing the evidence...the court is compelled to stay these executions," she said.

Gov. Asa Hutchinson had scheduled the executions to take place before the state's supply of midazolam, one of its lethal injection drugs, expires at the end of the month. Arkansas hasn't executed an inmate since 2005 because of drug shortages and legal challenges.

US bishops urge Arkansas officials to abandon rush of executions in April
Kevin Clarke
The state initially planned to execute eight inmates, but in the past two weeks, stays were issued for two of the men.

Arkansas hasn't carried out a double execution since 1999.

The inmates' attorneys had challenges the compressed timetable and the state's use of midazolam, which has been used in flawed executions in other states. The state's attorneys have called the challenge an effort to delay the executions indefinitely and have said they don't have a replacement identified for the drug if it expires.

The lawsuit is among a flurry of challenges the inmates have filed to halt the executions.