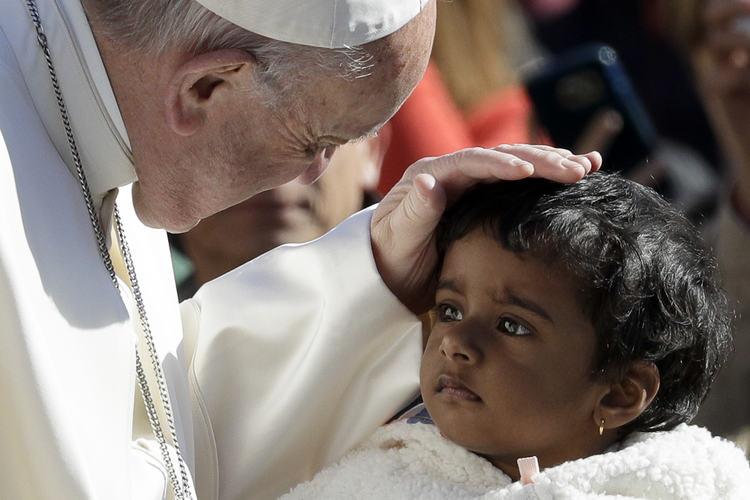 Pope Francis caresses a child as he arrives for his weekly general audience, at the Vatican, Wednesday, on March 29, 2017. (AP Photo/Andrew Medichini)

Pope Francis demanded urgent action on Wednesday to protect civilians in Iraq, saying forces involved in the battle for Mosul have an obligation to protect innocents following a recent spike in civilian casualties.

Francis issued a special appeal for peace in Iraq at the end of his general audience. He greeted an interfaith group of Iraqis in St. Peter's Square, encouraging them in helping Iraq find reconciliation among various ethnic and religious groups.

Francis said that he was particularly concerned about Iraqis trapped by recent fighting to take Mosul back from Islamic State group militants.

"In expressing profound sadness for the victims of the bloody conflict, I renew my appeal that everyone commit themselves to using all efforts to protect civilians, an imperative and urgent obligation," he said.

The U.N. human rights office has called on the U.S.-led coalition conducting airstrikes on Mosul to minimize civilian casualties, saying at least 300 people have been killed since mid-February including 140 from a single on March 17 airstrike incident on a house. The U.N. says IS militants are using human shields and setting a trap for the coalition.

Amnesty International has said the rising civilian death toll suggested the U.S.-led coalition wasn't taking adequate precautions as it helps Iraqi forces try to retake the city, though the U.S. has denied any loosening of the rules of combat.

Pope Francis visits Milan, urges Catholics to live in "hospitality and mercy toward everyone"
Gerard O’Connell

The Iraqi group that met privately with Francis before the audience included Shiite and Sunni Muslims as well as representatives from Iraq's Christian, Yazidi, Sabei and Mandei minorities. The delegation engages in dialogue with the Vatican's office of interfaith relations.