Pope Francis visits Milan, urges Catholics to live in "hospitality and mercy toward everyone"

Pope Francis visits Milan, urges Catholics to live in "hospitality and mercy toward everyone" 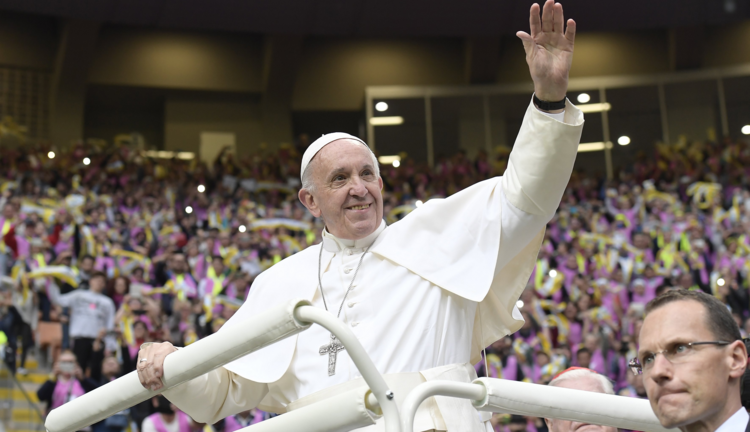 Speaking to more than one million Catholics at an open-air Mass in the park at Monza, 11 miles from Milan, on March 25, Pope Francis sought to strengthen their faith and to address the dissatisfaction among young people and families due to economic difficulties, which creates fertile soil for populist movements.

Francis had come to visit Milan, the financial and industrial capital of Italy but, as he made clear in his homily, he knows that here and throughout northern Italy all is not well. Many “feel lost,” he said, just like Mary at the time of the annunciation, because “we are living in a time full of speculation.” This speculation regards “life, work and the family,” “the poor and migrants,” “young people and their future,” and as a result of this, “the daily life of many families is tinged with precariousness and insecurity.” While speculation abounds, he said, “pain knocks on many doors, and dissatisfaction increases among the young for the lack of opportunity.”

Aware that all this has given rise to populist movements in northern Italy that stoke xenophobia and advocate separation from the European Union, Francis, without ever mentioning them, called on Catholics in this part of the world “to remember” their history as a hardworking, civilized people and believers that have endured two world wars. He urged them to not allow themselves to become “prisoners of speeches that sow fractures and divisions as the only way to resolve conflicts in society” or to be taken in by “the magical solutions of division and estrangement.”

He asked them to also remember that “we are members of the great People of God,” which is made up of “many faces, histories and places of origin, a multi-cultural and multi-ethnic people,” and “we are called to be host to the differences, and to integrate them with respect and creativity, to celebrate the newness that comes from others.” He reminded them that they are part of “a people that is not afraid to embrace the borders, the frontiers” and “is not afraid to welcome the one who is in need because it knows the Lord is present there [in that person].”

Above all, he encouraged them to live “the joy of the Gospel” which gives “life and hope” and expresses itself in “solidarity, hospitality and mercy toward everyone.”

Pope Francis arrived here by plane from Rome early morning, and was warmly welcomed at the airport by Cardinal Angelo Scola, the runner up to him in the 2013 conclave, who accompanied him everywhere throughout the day-long visit.

“I come as a priest," Francis told the local community.

Francis had made clear that he wanted to begin his visit from the periphery of the city, and so the cardinal took him first to the Case Bianche (“White Houses”) district, an area marked by many problems where migrants, Muslims and the travelling people (gypsies) live.

“I come as a priest,” Francis told the local community when they welcomed him at the piazza of the Case Bianche. When they gave him gifts of a stole and a restored statue of Our Lady, he commented on the latter, saying, “the church is always in need of restoring, because we who make it up are sinners.”

From the piazza, he went to a multi-story block of apartments to visit three families. He first called on a civilly married couple, Dorotea Falcone and her bedridden husband, Stefano, who has been artificially fed since 2013 and for whom she cares for. “When he came in he had a big smile, it moved me. He did not say anything. He went close to my husband and blessed him,” the woman said afterwards.

The pope next visited an immigrant Muslim family from Morocco: Mihoual Abdel Karim and his wife, Tardan Hanane, whose children participate in the after-school program run by the local parish. She was filled with joy and afterwards told the press, “I still cannot believe that the Holy Father came to my home.”

Francis’ third and last visit was to an elderly couple, Nuccio Oneta, who is seriously ill, and his wife, Adela, who is blind and had to be hospitalized two days ago. He and the husband phoned her in hospital.

While in this district Francis again made news by doing something entirely normal: he went to a public toilet. A photo of him exiting from the toilet went viral.

The Milan archdiocese is the biggest in Italy, and one of the world’s largest, with over 5 million Catholics in 1,100 parishes, served by 1,800 priests, 1,000 men religious and 6,000 women religious. Francis met thousands of the clergy and sisters in Milan’s Gothic cathedral, which took six centuries to build. There he engaged in an inspiring, humorous dialogue with them, answering questions from a priest, a nun and one of the diocese’s 143 married deacons.

Priests should “cast out into the deep,” and God will do the rest in his own time and in his own way, he said answering the priest’s question. He said priests should pray for the grace to evangelize “with joy,” as they face the challenges of the day, both within and outside the church. They should “neither condemn or canonize the world” but should learn to discern “the excesses of uniformity and relativism.” As for diversity and unity in the church, Francis reminded everyone that it is the Holy Spirit who gives both.

The Jesuit pope emphasized the importance of the formation of priests in “discernment,” but he said it is also necessary to educate catechists, educators, parents and even children in discernment.

Responding to the deacon, he said “the specific vocation” of a deacon is “service,” and this includes reminding other members of the church that one essential dimension of faith is service to God and to people. He warned deacons against the temptation of clericalism.

He counseled nuns against giving into “resignation” even if their numbers are decreasing and many are elderly, as the sister had said. He warned that “resignation” leads to “sloth.” He urged them not to focus on security in their communities, but to make a pilgrimage to the origins of their religious orders and then, following in the footsteps of their founders, to just think of carrying the Gospel forwards.

When he finished speaking, Cardinal Scola surprised and delighted him by announcing that in gratitude for his visit, the local branch of Caritas bought 50 houses for homeless people.

From the cathedral, Francis drove to the San Vittore prison, where some 900 inmates are awaiting trial. There he had lunch with 100 of them, eating risotto and veal cutlets that they had cooked. He took a brief siesta there in the prison chaplain’s room, before driving to the park in Monza to celebrate mass.

The final event of the day brought Francis to the famous San Siro football stadium for an encounter with 80,000 young people, thousands of whom were preparing for confirmation. They treated him to a choreographed performance, and then asked him questions, as did some parents. He urged the children and young people to pray, play and avoid bullying. He encouraged parents to educate their children in solidarity, to go to church and play with them, and read “Amoris Laetitia,” especially chapter 4.

Cardinal Scola, thanking him for his visit at the end of Mass, quoted St. Ambrose: “Where Peter is, there is the church. And where the church is, death is not there but life eternal.” Then turning to Francis, he said, “from the first day of your pontificate, your style of exercising the ministry of Peter is the expression of a witness that unifies gesture, example, culture and teaching. We want to learn from this, and from this comes our gratitude for the joyous and stimulating way in which you have been with us during this intense day.”

The comments, all from the same individual, that I have just read for this story involve some of the same politically venomous and unChristian attitudes that I read often on this site. I request that they be removed because they do not reflect either Catholic morality or values and are intended to denigrate the person of Pope Francis.

I agree. Please remove them quickly.

They have been removed; we regret that they were not caught by our automatic monitoring or removed sooner. Thank you for bringing them to our attention.

Why is the same individual allowed to post so many hateful and false comments? Surely they do not reflect the America community. Pope Francis is an inspiration to a vast majority of people, both inside and outside the Church, and I read about his visits and comments in order to be encouraged to live the Gospel more deeply. I echo the preceding suggestions that such skewed comments should be edited out. They are appalling.

Commonweal dropped its comments function. Maybe it's time America did the same. The above nasty comments show how infested it's become over the years with dolts and thugs.

They have been removed; we regret that they were not caught by our automatic monitoring or removed sooner. Thank you for bringing them to our attention.

The previous writer mentiosn Commonweal ending their comments section. I DO NOT AGREE that America should do the same. One suggestion however: perhaps everyone who is permitted to comment must be an investor in the magazine, in other words, some form of contributor to the magazine. How that might be implemented, I realize, may be too difficult a task and not worth the cost or energy but I believe that it might discourage some of the aggressors on the site not willing to support what they so adamantly oppose.