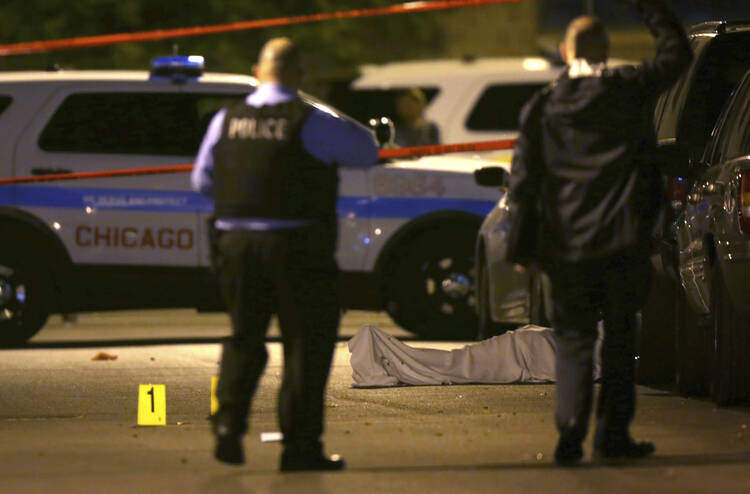 In this May 30, 2016 file photo, police work the scene where a man was fatally shot in the chest in Chicago (E. Jason Wambsgans/Chicago Tribune via AP).

In an unprecedented action, the United States attorney for Chicago took advantage of his last day in office to issue a blunt assessment of the city’s escalating gun violence and issue an impassioned plea for change.

“Today I stand unshackled by the constraints of being U.S. Attorney,” said Zachary Fardon, one of 46 federal prosecutors who were ordered to resign last week to make way for new Trump administration appointees. “My hope and goal is to just speak truth.”

In a five page “open letter,” Mr. Fardon traced problems in the city’s most troubled neighborhoods to neglect “rooted in ugly truths about power politics, race and racism that are a tragic part of our local and national history.”

He called for hiring 15 to 20 additional federal prosecutors to press gun and gang-related cases; a federal monitor to oversee a consent decree on police department reforms; curbs on social media for convicted gang members; additional community youth centers; an overhaul of the bail bond system; and consolidation of the local offices of the F.B.I., the Drug Enforcement Agency, and the Bureau of Alcohol, Tobacco, Firearms and Explosives into a single investigative entity.

Mr. Fardon raised no objection to his removal, which is standard operating procedure when a new president is elected. Rather, he said he wanted to address questions being asked by many citizens about the spiraling violence: “Why is the city so inept? Where is federal law enforcement?”

Mr. Fardon had been U.S. attorney since 2013, and his comments follow two of the worst years for gun violence in Chicago’s history. Last year, nearly 2,700 people were shot, and 764 killed.

Reaction to his comments was swift and varied.

“The fact he would do this should be applauded,” said Jim Bueermann, president of the Police Foundation, a nopartisan law enforcement research group based in Washington, D.C. “I’d like to see other U.S. attorneys do this.”

Mr. Bueermann said Mr. Fardon stressed the need for balance between the three main pillars of law enforcement—prevention, intervention and suppression—but left it to others to address the root causes of urban violence.

“We need to be taking a look at the risk factors in the lives of young people,” Mr. Bueermann said. “What puts kids at risk of committing violence, of using drugs, of teen pregnancy, or dropping out of school? If we don’t focus on these things, we might as well resign ourselves right now to building more jails.”

Mr. Fardon suggested the intense scrutiny and criticism the Chicago police department has received in the wake of several high-profile shootings—including the 2014 death of teenager Laquan McDonald, who was shot 16 times by an officer—has caused some officers to “become scared and demoralized” and avoid interacting with the community. It is a phenomenon known as “de-policing.”

“Cops stopped making stops. And kids started shooting more—because they could, and because the rule of law, law enforcement, had been delegitimized. And that created an atmosphere of chaos,” Mr. Fardon wrote.

Mr. Bueermann of the Police Foundation said there is “little scientific evidence” currently that de-policing is a widespread problem in Chicago or elsewhere. “My own belief is that it does happen, but we don’t know what impact it has. We hope to study that at some point,” he said.

Mr. Fardon’s letter, however, stressed the urgency of taking action.

He was critical of a 2015 agreement that settled a lawsuit brought by the American Civil Liberties Union of Illinois over the practice of street stops known as “stop and frisk.” That agreement required officers to fill out paperwork on each encounter.

Ed Yohnka, a spokesman for the Illinois A.C.L.U. said the agreement aimed to restore trust between police and residents of neighborhoods outraged by stops that often included body searches but yielded no evidence of criminal activity.

“The problem is that the community does not view the police as allies in solving crimes,” Mr. Yohnka said. “At the core of this is the fact that the system of policing and oversight of policing in this city is broken.”

He said missing in the Fardon memo was a focus on “a system of policing where the community is involved.” He said the department needs to deploy officers in a way that allows them to get to know the people in the neighborhoods they patrol, not just the criminals.

Mr. Fardon praised the majority of police officers for “fighting hard to stem the violence."

Mr. Fardon praised the majority of police officers and other law enforcement officials for “fighting hard to stem the violence, with episodic success” and struggling with “their own sense of frustration and despair,” but was not spare in his criticism.

He said the city needs to sign a consent decree with the U.S. Department of Justice detailing police reforms. He said that decrees should be overseen by an independent monitor who will ensure that city officials address “systemic deficiencies in training, supervision and accountability.”

“If you leave correcting those deficiencies to the vagaries of city politics, then you likely lose the long-term fight,” Mr. Fardon wrote. “This city’s history is replete with examples of saying the right thing, in some cases starting the right thing, but then losing focus.”

Chicago Police Superintendent Eddie Johnson told The New York Times he agreed with many of Mr. Fardon’s remarks and that the city is already working to overhaul its training and supervision of officers, and is revising its use of force policy.

Jedidiah Brown, a community activist who has led marches against the Chicago police department, said he did not see the need for a consent decree if the city improves the training, supervision and accountability of officers—something Mayor Rahm Emanuel has promised to do.

He said Mr. Fardon’s comments also missed the mark by not focusing on the lack of opportunity in the city’s poor neighborhoods, which then leads to violence.

“He speaks as someone who hasn’t heard the voices of the people,” Mr. Brown said. “The community is not asking for more policing, but more investment.”

Mr. Fardon also called for an overhaul of the bail bond system, which he said “keeps non-violent poor defendants in jail awaiting trial, and allows violent gang members to get out out because they can post bond. That’s nuts.”

He said there should be no bail in state court for repeat gun offenders or for those charged with violent crimes who have prior gun or violence convictions. It is a position the Police Foundation also supports.

Without naming the president, Mr. Fardon offered an oblique criticism of a tweet Donald J. Trump made about sending “the Feds,” which many interpreted as referring to the National Guard, to assist Chicago police. “What would a National Guard presence say to the folks in those neighborhoods? This is war, and you are the enemy,” Mr. Fardon wrote.

“There is only one enemy here, and it is us, all of us in Chicago. We are the problem, and we are the solution,” Mr. Fardon said.