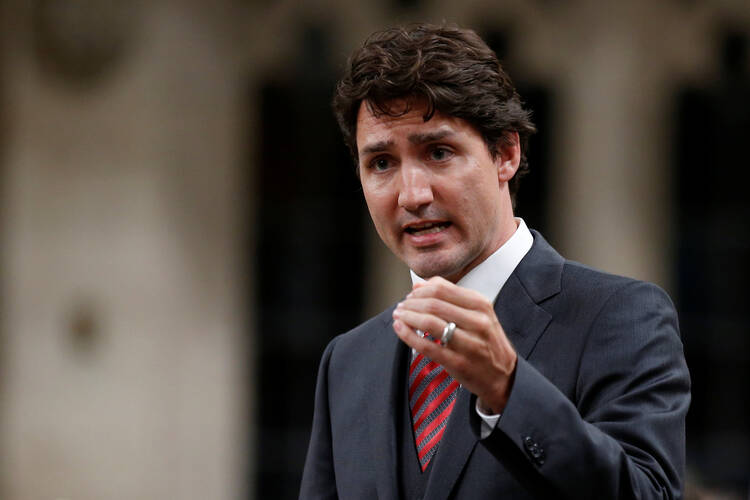 Canadian Prime Minister Justin Trudeau speaks in the House of Commons in Ottawa, Ontario, on May 31. (CNS photo/Chris Wattie, Reuters)

In a biting letter to Prime Minister Justin Trudeau, the president of the Canadian bishops' conference called the government's new overseas abortion policy "a reprehensible example of Western cultural imperialism."

In a separate letter to Trudeau, Cardinal Thomas Collins of Toronto expressed "deep concern and disappointment" and called it "arrogant for powerful, wealthy nations to dictate what priorities developing countries should embrace."

Cardinal Collins and Bishop Douglas Crosby of Hamilton, Ontario, president of the Canadian Conference of Catholic Bishops, were responding to a March 8 announcement that the government would "invest" $650 million (US$483 million) over three years to provide abortion and other services in the developing world.

In addition to funding abortions and other sexual health initiatives, Canadian money will now be earmarked to support foreign advocacy organizations working to make abortion legal in nations that currently ban the practice.

Canadian money will now be earmarked to support foreign advocacy organizations working to make abortion legal in nations that currently ban the practice.

Bishop Crosby's letter cited a Globe and Mail article that revealed a major part of the funding would be directed toward removing "judicial and legal barriers to the fulfillment of sexual and reproductive health and rights." The article cited a federal official who confirmed that "these barriers include the anti-abortion laws in many countries."

"Such a policy is a reprehensible example of Western cultural imperialism and an attempt to impose misplaced but so-called Canadian 'values' on other nations and people," Bishop Crosby wrote in his letter.

"It exploits women when they are most in need of care and support and tragically subverts true prenatal health care. It negates our country's laudable efforts to welcome refugees and offer protection to the world's homeless, when the youngest of human lives will instead be exterminated and the most vulnerable of human beings discarded as unwanted human tissue."

Cardinal Collins said that while it was "commendable and necessary" to support the rights of women and young girls, the prime minister's "public comments suggest that unless a woman has access to abortion or contraception, she is not empowered or able to realize her full potential."

"Public comments suggest that unless a woman has access to abortion or contraception, she is not empowered or able to realize her full potential."

"It is praiseworthy to offer international aid; it is arrogant for powerful, wealthy nations to dictate what priorities developing countries should embrace," he wrote. "Pope Francis has cautioned the rich and powerful West against the danger of 'ideological colonization,' in which such countries and organizations offer funding to help further a particular social agenda.

"Money spent on promoting abortion and contraception could be spent on vaccinating millions of women and girls against malaria or other diseases," the cardinal said, noting that $650 million "could help build a lot of schools or universities, pathways to knowledge for future female leaders of our world."

Cardinal Collins pointed out that Canada "is blessed with prosperity and a wealth of resources."

"Surely we can do better than imposing a distorted vision of the empowerment of women on the people of countries that deserve our support to respond effectively to the challenge of their most pressing needs," he said.

Bishop Crosby said the prime minister's policy and vision "are contrary to the fundamental ethic" of protecting the weak and vulnerable.

He said the policy is "in conflict with the principles instinctively shared by the majority of the world's population and consistently upheld by the Catholic Church: to defend and protect human life from conception to natural death."

Trudeau announced the plan on March 8, International Women's Day. The new initiative will support abortions, contraception, sexual education and reproductive health, according to a government statement.

The Trudeau policy is in sharp contrast to that of former Prime Minister Stephen Harper. His government implemented a five-year, $3.5 billion foreign aid program to support maternal and child health that explicitly excluded abortion-related services.

This story was compiled by the staff of The Catholic Register in Toronto.

Collins of Toronto... called it "arrogant for powerful, wealthy nations to dictate what priorities developing countries should embrace
but

it is entirely acceptable for gluttonous and bejeweled pulpiteers to do so.
Hallelujah!

The Trudeau government, not satisfied with imposing pro-abortion stances on all its candidates, now wants to export its murderous philosophy to the undeveloped world. Truly a demonic act from a country that was a humanitarian beacon to all.

The Trudeau Government does not impose pro-abortion on its candidates..
The citizens of Canada do.
This is called The Will of the people.