Is the right to abort a child with disabilities becoming a duty? 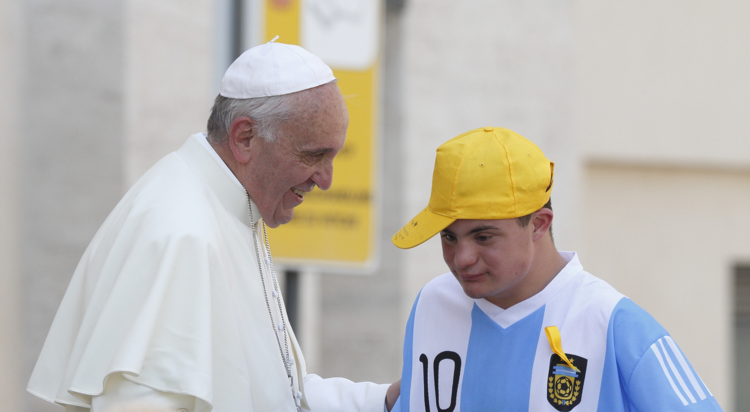 Pope Francis greets Alberto di Tullio, 17, after letting him sit in the popemobile chair during the general audience in St. Peter's Square at the Vatican June 19. Di Tullio, who has Down syndrome, was treated to a literal spin in the popemobile when the pope turned the youth around in the white papal chair. (CNS photo/Paul Haring)

It lasts only two minutes. Titled “Dear Future Mom,” the film features children with Down syndrome from different nations. They speak in various languages with appropriate subtitles. They address a mother who is expecting a child with the genetic condition, explaining the skills a person with Down could acquire: language, education, work, even the ability to fix a bicycle. Produced by the Jérôme Lejeune Foundation in 2014, the film has won numerous awards and has been exhibited at international celebrations of World Down Syndrome Day, marked each year on March 21.

But the French government has recently banned it.

Erasing good news about people with disabilities can only encourage the choice to abort people with Down syndrome in the first place.

France has one of the world’s highest rate of abortions of unborn children with Down syndrome. Ninety-six percent of such pregnancies are terminated. To avoid provoking the slightest twinge of regret for such eugenic abortions, the state must suppress positive narratives of people with such a chromosomal anomaly. Of course, erasing good news about people with disabilities can only encourage the choice to abort people with Down syndrome in the first place. The choice has been made progressively more coercive by a medical profession, a state health system and a media determined to portray the person with disabilities as only an expensive burden. The right to abort a child with disabilities is quickly becoming the duty to do so. Any information challenging that choice—even an anodyne two-minute video—must be airbrushed away. 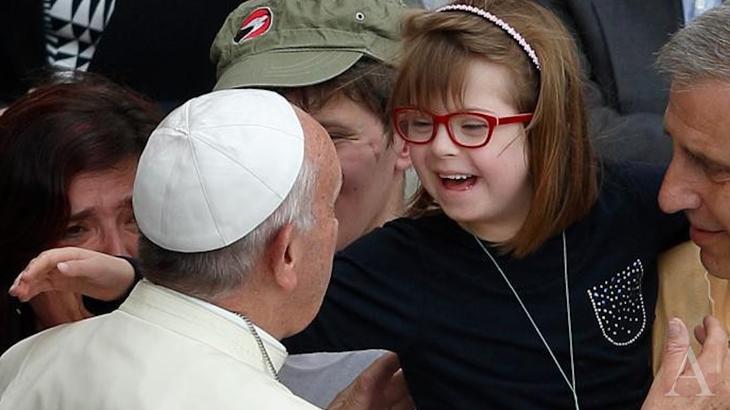 Criticizing the French government’s censorship of “Dear Future Mom,” Renate Lindeman, the mother of two children with Down syndrome and spokeswoman for the advocacy group Downpride, has written, “if the truth gets out that 99 percent of people with Down syndrome are happy with their lives, society may start to question the systematic…and deliberate mass elimination [of Down children] under the pretense of healthcare and women’s rights.” The Polish deputy minister of justice, Patryk Jaki, posted a smiling photo of his son, who has Down syndrome, with the caption: “Hello, France! P.S. In our country democracy and tolerance are doing better. Not only can I live…I can smile.”

Truth was one of the early victims of our abortion wars.

The increasing determination to eliminate people with Down syndrome before birth rests uneasily with the immense progress Western society has made in expanding the well-being of the disabled after birth. Due to medical discoveries, the lives of people with Down syndrome are much longer. Special education is better funded and better adapted to the needs of the individual student. Employment opportunities have broadened beyond the old sheltered workshop. The grim warehouse-like institutions for the “mentally defective” have largely disappeared.

Everything I Can Do: Living with Down syndrome
Joey Kane

Five myths in the abortion and Down syndrome debate
Charles C. Camosy

But how long can the disabled flourish in a society where a Scandinavian minister of health recently boasted that his country was on its way to becoming a “Down-free” zone? Once unthinkable, the infanticide and euthanasia of the disabled are calmly discussed by an Ivy League professor. How long before our economic calculus, so powerful in promoting eugenic abortion, questions the value of special education classes or the travel accommodations for people in wheelchairs? Justice and charity will inevitably run thin in a society that simply does not want an entire class of persons to exist.

Thank you Fr Conley for defending the right of our children with Down syndrome to live and love.
I met with Dr Peter Singer in 2011 to share my book of stories from parents like me=(A Special Mother is Born) and to ask him if he'd ever met a person with Down syndrome.
He told me that once he ate at the home of a fellow professor whose daughter with Down syndrome (and her nurse) passed through the room where the adults were dining. On that single encounter he based his famous opinion that the life of a child with Down syndrome is less valuable than the more intelligent (in his opinion) pig.
Dr Singer, come over to our home some Friday night, my Christina will make you a pizza and show you some love!

Thank you, Father Conley for defending the dignity of people with Down syndrome. May the Lord bless you for your Christ-like love!