Everything I Can Do: Living with Down syndrome 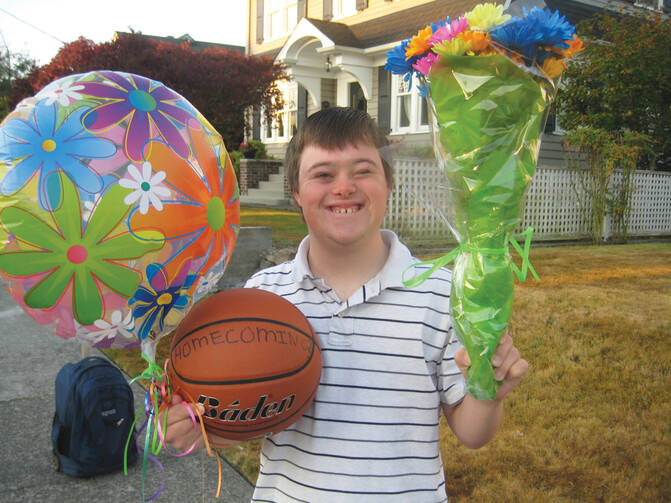 Having Down syndrome is the same as having a disability. My teacher, Mr. Beall, talks about people having disabilities. He says that it does not matter if you have a learning difference because everyone should be treated the same. Other people think and say I have a disability, but I don’t really think of myself as having a disability because I feel I fit in with other people. You should not think that you can get away with stuff just because you have a disability. If you are late to class, you should get detention just like everyone else does.

I can do things that other people can do even though I have a disability. I can swim, play basketball, play Ping-Pong, be good at math and give hugs to people. I can go to college, but I need to qualify for accommodations because of my learning disability. I am awesome at prayer because I love people and I know God loves me. I like sports like football, basketball, baseball and soccer. I love the Notre Dame Fighting Irish, the Gonzaga Bulldogs, the Washington Huskies, the Seahawks and the Mariners.

I can work just like other people. Last summer I worked for the Mariners. My job was handing out items at baseball games. I handed out things like bobble-head dolls, posters, backpacks, trading cards and T-shirts. I got paid minimum wage: $9.04 an hour, plus I got half-price food. Because I did such a great job, my boss asked me to come back for the 2013 season.

Another job I had was working at Mount St. Vincent’s. This is a nursing home where I would talk to people, help them get to places and bring trays of food to them. I also cleared off tables. This job gave me a good chance to make friends and do service. I think service is what God wants me to do, along with following the commandments.

Also, I had a job watering my neighbors’ plants for the whole summer. Twice a week I had to water plants and flowers so that they would not die. I got paid $5 each time. Someday, I will have a job where I work almost every day. I hope it is for the Mariners. I would like to do something where I am with the team. That way I would get to meet the players.

I might be a teacher someday. I would like to teach little kids because they are cute. I would want to teach math. I don’t think that having Down syndrome would be a problem in doing this.

Another way I am the same as other people is that I like food. Maybe I like food more than most other people. I really like pizza, pasta, gold fish, hot dogs, ramen, french fries, hamburgers and milkshakes. If I were a babysitter, I would probably order pizza for the kids and myself.

God loves me because God made me. He made me just the way I am, and he loves me just the way I am. Because I have a good sense of humor, people feel more comfortable around me. Sometimes someone in my class says that he feels embarrassed to be around me. On the other hand, this same person asked me to sit at his table. This is a good example of the way it should be. I should be treated as if I don’t have Down syndrome. In fact, I do not even think of Down syndrome as being a disability, but many people think it is.

This is the first time I’ve really talked about having Down syndrome. I don’t tell people because I guess I think people know I’m a good guy even though I have Down syndrome. Not to be cocky, but I’m a popular guy.

Read a reflection by Matt Kane, Joey's brother, on the way Joey has changed his view on life, here. "Generation Faith" is a new feature that offers high school and college students a space to reflect on the joys and challenges that come with living out one's faith in the midst of real life. Submissions should be sent to articles@americamagazine.org with the subject line "Generation Faith."

Show Comments (
5
)
Comments are automatically closed two weeks after an article's initial publication. See our comments policy for more.
ed gleason
8 years 10 months ago
Joey knows God loves him. and I bet this knowledge shines out and makes him popular.Keep on trucking Joey. .
Beth Cioffoletti
8 years 10 months ago
I loved your essay, Joey! It made me realize how much I appreciate my friends and our differences.
MAE KIERANS
8 years 10 months ago
Your personal story is wonderful, Joey, and I thank you for sharing it! Your faithful example encourages me! Your love of life really shows! I am thankful to God for wise, generous and loving people like you, and for your family and friends and teachers! Sr. Mae Kierans, CSJ
Stanley Kopacz
8 years 10 months ago
Thanks, Joey. This was one of America Magazine's best articles and I've been reading America since 1970.
JUDY SULLIVAN
8 years 10 months ago
Dear Joey, Thank you for your wonderful article. I am so Blessed to have two dear friends with Down Syndrome. I love it when they come to Mass with me as Mark and Mara introduce themselves and let everyone know that life is wonderful. I have sent them and their parents your article. This has been a Blessed day. Thank you. Blessings, Judy Sullivan