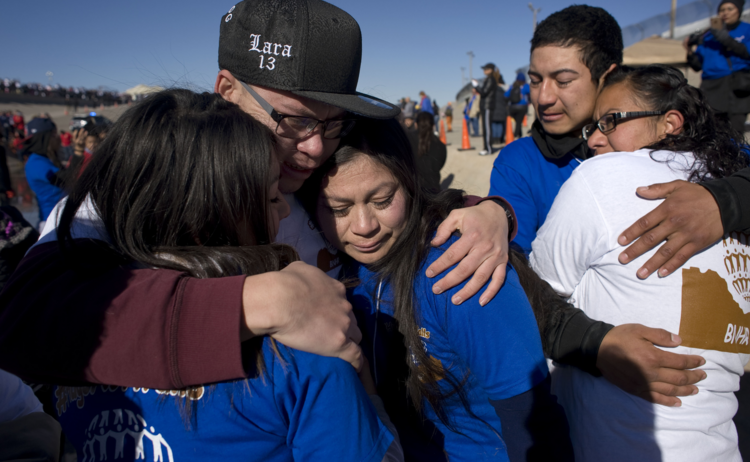 The mass detention and deportation of undocumented immigrants in the United States is nothing new and sadly bipartisan. Over the course of its eight years the Obama Administration deported over three million undocumented persons, more than any previous government.

In 1996 then-President Bill Clinton signed into law the Illegal Immigration Reform and Immigration Act, which among other things stopped undocumented immigrants who married U.S. citizens from automatically being able to get a green card; reduced the bar to deport undocumented immigrants from criminal offenses with jail time of at least five years to actions as minor as shoplifting; allowed undocumented people to be kept in detention for up to two years; and denied public universities the ability to charge undocumented students in-state tuition without giving the same to out of state students.

More than that, though, the act ruled that someone who re-enters the United States without proper papers after having been expelled once cannot receive any form of government waiver for 10 years. It is a law Guadalupe Pacheco (not her real name) knows all too well. Brought to the United States over 20 years ago at age 12 by her parents, “who saw this as an opportunity for us to have a better future,” Ms. Pacheco chose to leave eight years later to visit her grandfather shortly before his death. Upon attempting to return with a state I.D. that she had been granted legally, she was informed that having originally entered without a visa, she could not return to the United States for 10 years.

“My husband is a U.S. citizen and has done wonderful things in this country. I am a liability to my husband, and it is very hard to handle.”

She re-entered anyway; her family was here. Today, though she’s been married to a U.S. citizen for 12 years, she is still not eligible for a green card, nor—unable to conceive naturally and unwilling to do in vitro given the teaching of the church—is she allowed to adopt children.

“I didn’t even know this law had passed when I went,” she recalls. “Coming [to the United States] was not my choice. I wanted to touch my grandfather, to say goodbye to him. It was important to me and I think it was important to him.”

In addition to the fear people in the community are feeling is a sense of personal confusion and shame. Ms. Pacheco worries of the burden her situation places on her family. “Not only is my life being disrupted,” she explains, “but [that of] my husband, who is a U.S. citizen and has done wonderful things in this country. I am a liability to my husband, and it is very hard to handle.”

“You can feel bad about yourself,” says Ellie Hidalgo, of the undocumented men and women with whom she consults. “Like somehow you really are a second class person or there’s something wrong with you.” Ms. Hidalgo is the parish pastoral associate at Dolores Mission.

“I’m trying to fight it with all my being,” says Ms. Pacheco, “but it’s hard to view myself as having a label on my forehead that says not only I’m a criminal but an unforgiven criminal. And that’s very hard.”

In the midst of these tensions the church has proven something of a mixed blessing. Ms. Pacheco recalls visiting her husband’s family in another diocese and listening to the priest at Mass on Sunday tell his congregation, “If you vote for Hillary you will be excommunicated. You’re voting for a woman who kills babies.”

“I am pro-life,” Ms. Pacheco points out. “But to say that, as if other social injustices are not happening; it’s as if we’re invisible, we just don’t matter. That’s been hard.”

But other places, such as Dolores Mission, see a key part of their ministry right now as reminding people of their intrinsic value. “In our preaching on Sundays,” says Ms. Hidalgo, “the homilies have been talking a lot about the human dignity that everyone has and that people get to expect to be treated well and with human dignity, even by an I.C.E. official.”

“Even though I’m being labeled as ‘undocumented’ in God I see acceptance and I see love."

The parish’s workshops on the legal rights of those who are undocumented actually proceeds from that understanding: “Even if you don’t have documents,” she tells those who come, “as soon as you are in the United States you have constitutional rights that are based in the reality we know to be human dignity.” Our constitutional rights, Ms. Hidalgo argues, are the state’s recognition of that human dignity.

Despite her experience at her in-laws’ church, Ms. Pacheco draws immense comfort and relief from her religion. “Being a Catholic helps me recognize that I am forgiven by Christ and that I am truly free in my faith.”

Archbishop Gomez: Those with irregular immigration status 'do not cease to be our brothers and sisters.'
Jim McDermott

She “takes courage,” she says, in helping others like her—whether to apply for citizenship or renew their Deferred Action for Childhood Arrivals status—and in enlisting the support of others who can stand up in public in a way that she cannot. “Guadalupe, I will be your voice,” she imagines them saying. “I will walk for you in that march. I will stand for you.” By the time she finishes her thought, her voice breaks with emotion.

Though her personal situation looks unlikely to improve any time in at least the next four years, again and again Ms. Pacheco finds consolation in her faith. “I love the image of Jesus Christ sitting on a bench and embracing the person next to him, being so attentive,” she says. “My image of God is a God who listens, who understands me and who I can truly believe that in the cross he has given me to carry, I’m not alone.

“Even though I’m being labeled as ‘undocumented,’ and some people will add ‘criminal’ and all these other terrible labels, in God I see acceptance and I see love. And I can truly see my reflection.”

In the US it is the responsibility of Congress to make the laws. If we disagree with the laws, in this case immigration, the appropriate starting point is to put pressure on Congress to change them. Protesting may get news coverage but it has almost no effect on the laws and little on the enforcement of the laws.
From the standpoint of the Catholic Church, I believe the direction should be to reduce (or eliminate) barriers to migration throughout the world. Most countries have restrictions on movement of people, especially from outside, and availability of citizenship. All can come up with “good” reasons for these restrictions (mostly to preserve their culture and lifestyle). Although most complaints concerning immigrant rights are directed at the US, the US laws are relatively lax compared to many other countries.

A country needs to control its borders, but the pressures behind migration are a moral issue. Additionally, the problem of migration is likely to get worse because of climate change. Population pressure is a big part of what drives migration and it would be nice if the Church would examine that issue honestly.