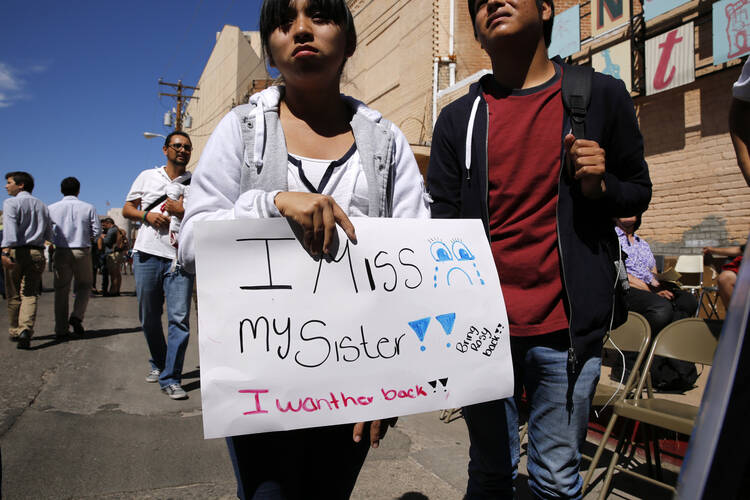 If you want to understand the impact of the raids that the United States Customs and Border Protection undertook in over 60 communities across the country in early February, start with the children. “They do not want to go to school,” says Archbishop José Gomez of the Archdiocese of Los Angeles, vice president of the U.S. Conference of Catholic Bishops. “They think their parents are going to be taken away while they’re gone.”

“We have children at Dolores Mission,” says parish pastoral associate Ellie Hidalgo, “if their parents are home late from work they immediately get anxious. ‘Is my mom going to come home?’ they ask.”

And if they don’t come home, where will those children end up? At parishes and immigration clinics around the country right now, workshops are being offered to help undocumented people know their rights, how to proceed if U.S. Immigration and Customs Enforcement officers show up at their homes—how for instance I.C.E. agents cannot enter if no one opens the door—and what sort of plan they should have in place for their children. “Who is going to care for your child if you cannot,” explains Ms. Hidalgo, “their allergies; doctor’s phone numbers; health insurance.”

Children "do not want to go to school,” says Archbishop José Gomez. “They think their parents are going to be taken away while they’re gone.”

Also, a signed document granting someone power of attorney would be worth having on hand, says Ms. Hidalgo. It might not be necessary, but in the current climate it is just not clear. “One of our great fears," she explains, "is if you don’t do power of attorney, your child could be put into the foster child system. That is a possibility.”

What local immigration experts are finding uniquely disturbing about the current raids are their severity and the lack of honesty surrounding them. David Marin, director of Enforcement and Removal Operations for I.C.E., describes them as routine, targeting individuals with prior convictions for “sex offenses, assault, robbery and weapons violations.” And Secretary of the Department of Homeland Security John Kelly, who was in Los Angeles during the raids in February, said the actions “targeted public safety threats” and were “consistent with the routine, target arrests carried out by I.C.E.’s Fugitive Operations teams on a daily basis.”

Jorge-Mario Cabrera of the Coalition for Humane Immigration Rights L.A. emphatically disagrees. “There was nothing normal about this particular action by I.C.E. If it was ‘business as usual,’ it was business as usual on steroids. Their actions were almost military style—they spoke in terms of ‘surge’ and ‘targeted hits’. Individuals who were low priority in the past, who would not have been detained, were detained this time around, and some have been deported.”

Some of those detained were refused the right to consult with an attorney; attorneys who went to offer help were also turned away. And I.C.E. turned those detained around to detention centers or the border very quickly. It seemed clear, says Mr. Cabrera, that “they wanted to ensure that we did not speak to these folks and had no way of stopping their deportation.”

"The agriculture industry, the restaurant industry, the construction industry—let’s be really honest, these are the people who keep the United States going."

Gabe Castro, an immigration attorney at Catholic Charities in Los Angeles, likewise notes that the kind of mass action undertaken in early February was much more akin to the policies of the Bush Administration than anything experienced over the last eight years under Mr. Obama. And while Mr. Kelly insisted on Feb. 13 that these were “targeted” raids in which 75 percent of those arrested were “criminal aliens,” Ms. Hidalgo says the information she has received from witnesses included descriptions of I.C.E. agents looking for people to detain.

“It was actual racial profiling,” she says. “They were going into communities where they thought undocumented folks are, and from what I was hearing they were literally going door-to-door.

“You’re not doing that if you have arrest warrants.”

Despite the president’s subsequent suggestions to the contrary, his Jan. 25 executive order on immigration declares it the policy of the executive branch to “detain individuals apprehended on suspicion of violating federal or state law, including federal immigration law,” in other words, simply for not having proper papers. And while Mr. Kelly says the 680 people taken last week include murderers, drug runners, gang members and pedophiles, Mr. Cabrera notes I.C.E. has yet to offer any sort of list of names and their alleged criminal activity.

Meanwhile, there are numerous reports of people taken in simply because they were undocumented, such as the 50-year-old house painter whose attorney tried to stop I.C.E. agents from putting him on the bus, as he had no criminal record, only to be told “things had changed.”

There are also cases in which people were arrested because they were assumed to be undocumented. “We have the case of a U.S. citizen born in Mexico but both of his parents are U.S. citizens; he has a U.S. passport,” says Mr. Cabrera.

“Twelve officers came to his home. He was sleeping; his daughter was present, his elderly parents. Everyone in the household was a U.S. citizen.” Mr. Cabrera alleges that the officers did not identify themselves or ask for his immigration status. “They took him in and made him wait four hours. Then, when he was finally able to ask, ‘Who are you?’ and they said they were immigration, he said ‘What do you mean? I’m a U.S. citizen.’ And they let him go.”

The Coalition for Humane Immigration Rights L.A. and the local Catholic Charities have been trying to provide practical tips on rights and procedures for people confronted by I.C.E. officers. The guidance is not just for undocumented people. Current federal policies, Mr. Castro points out, “are also a threat to visa holders, to green card holders. Everyone should at least consult with an attorney and ask what’s best in their situation.”

“Usually every week we get two or three citizenship applications,” says Mr. Cabrera. “Just today we got 39. On Saturday we got 14. Last Thursday we got 22.” He calls it the one “silver lining” of the current situation.

Archbishop Gomez: Those with irregular immigration status 'do not cease to be our brothers and sisters.'
Jim McDermott

“They deserve to be treated with dignity and to not have to fear about who’s knocking on their door and if their family is going to be separated tonight.”

Considering the situation of undocumented people today, the usually soft-spoken Archbishop Gomez becomes passionate. “These people are so good,” he says. “When you tell them what they are supposed to do, they do it.

“Obviously, we understand that some people have committed crimes and we understand that that needs to be addressed,” he says. “And also, that our country needs to protect its borders. But if our elected officials would really address the need for realistic immigration reform, everyone would cooperate. The undocumented, the business world, the politicians—everyone wants to work together to find a dignified solution to this reality.

“They are here because they care about their families. They really want to be good citizens. They want to make a contribution to the life of this country.”

Maybe the author should explain why Obama's raids were not a problem despite the fact they were much bigger?

Sounds like the bishops are in sync with Trump's immigration approach. As far as realistic immigration reform, it cannot happen till there is control of the borders and that is what Trump is trying to do. But he is fought at every possible place by those reflexively opposing him. Maybe the bishops could try to get these opponents to be reasonable.

Neither. I am asking if they are exaggerated and why were much bigger raids under Obama not a problem.

Neither. I am asking if they are exaggerated and why were much bigger raids under Obama not a problem.