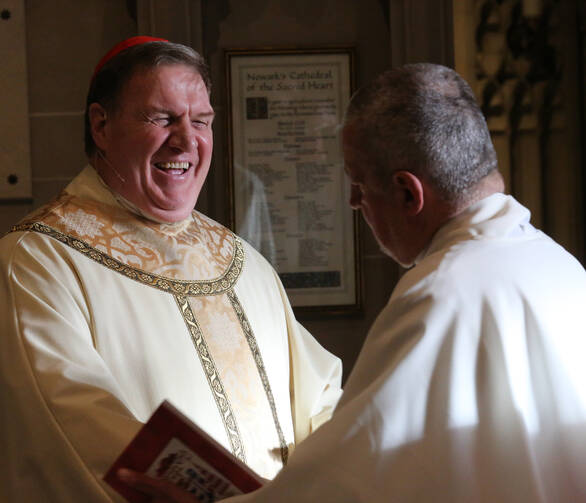 New Man in Newark. Cardinal Joseph W. Tobin smiles as he greets a clergyman before his Jan. 6 installation Mass at the Cathedral Basilica of the Sacred Heart in Newark, N.J. (CNS photo/Bob Roller)

Cardinal Joseph Tobin used his installation Mass as archbishop of Newark on Jan. 6 as an opportunity to call on Catholics to move away from rancor over “hot button” issues and toward contemplating how to live out their faith in a more holistic way.

Standing before a massive crowd inside Newark’s Cathedral Basilica of the Sacred Heart, which included scores of clergy and local officials, including New Jersey Gov. Chris Christie, Cardinal Tobin said he was recently asked which issue worried him most about the future of the church.

RELATED: An Interview with Cardinal Tobin from Rome

His answer? What he dubbed “the chasm between faith and life”—and not the culture war issues that “dominate the discourse, both inside and outside the church,” he said.

“As noisy and divisive as those questions might be,” he continued, “they don’t worry me as a growing trend that seems to isolate us, convincing us to neatly compartmentalize our life, subtly seducing us to go to Mass on Sunday and for the rest of the week, do whatever we think we need to do to get by.”

He said that Christians must be marked by their willingness to show “kindness to all: to the searching young and the forgotten elderly, to the stranger and the voiceless, to the powerful and the cynical.”

Cardinal Tobin’s appointment to Newark came as something of a surprise, given that Pope Francis announced in October that the then-archbishop of Indianapolis would be made a cardinal in November. Just weeks after that announcement, the Vatican announced that he would be transferred to Newark to lead the archdiocese’s 1.5 million Catholics.

Outgoing Archbishop John J. Myers, who welcomed Cardinal Tobin to the cathedral at the start of Friday’s Mass, has faced criticism for his handling of instances of clergy sexual abuse and accusations of lavish spending on a retirement home.

Archbishop Myers is seen as a church traditionalist. He released a memo in 2015, for example, reiterating the church’s ban on divorced and remarried Catholics being able to receive Communion, just as other bishops from around the world were discussing the issue in Rome at the behest of the pope.

Cardinal Tobin, by contrast, is a member of a religious order and is viewed as someone open to dialogue and discernment.

“I think Redemptorists always like to look on the other side of the tracks and care for people that maybe the church isn’t able to care for,” hetold America in October. “Our founder spoke of the most abandoned poor and that can take different form in different areas. The way I hear it, and the way I would speak of it when I was superior general, was basically we must go where the church isn’t able to go.”

He is also willing to take on difficult political questions, as evidenced by his 2015 refusal to comply with then-Gov. Mike Pence’s request not to resettle a family of Syrian refugees in Indiana, which brought him national attention.

In a speech at the University of Notre Dame last October, he said Catholics must “urge public officials to avoid reactions that politicize events abroad, or in this country, and to avoid misplaced blame that creates an atmosphere of fear.”

Ordained a priest in Redemptorist order in 1978, Cardinal Tobin, who speaks five languages, worked in parishes in Detroit and Chicago. By 1997 he was head of his religious order, based in Rome, and in 2010 Pope Benedict XVI promoted him to archbishop, assigning him the task of managing the Vatican office that oversees religious life.

Around this time the Vatican had launched two investigations of Catholic sisters in the United States, apparently the result of the dissatisfaction among some church officials at what they saw as a drift away from traditional church teaching on contentious social issues among U.S. women religious.

For his part, then-Archbishop Tobin emerged as an advocate for the sisters, ruffling the feathers of some church leaders. After serving just two years of a five-year term, he was appointed to serve as archbishop of Indianapolis, traditionally not a premier post in the American church.

Then, with Pope Francis, he was named a cardinal and sent to Newark, a meteoric rise after falling out of favor during a previous pontificate.

And he echoed the words of the pope during his homily, laying out his vision for the church.

Speaking to an audience that included six other cardinals and more than 60 other bishops, he said the church is “neither an elite club nor static container of truth,” calling it instead a “place where believers speak and listen to each other, and it is the community of faith that speaks with and listens to the world.”

Using language borrowed from the pope, he said “the church senses a responsibility for the world, not simply as yet another institutional presence or a benevolent NGO, but as a movement of salt, light and leaven for the world's transformation.”

“For this reason, our kindness must be known to all,” he said.