Prayers for life surround the March for Life 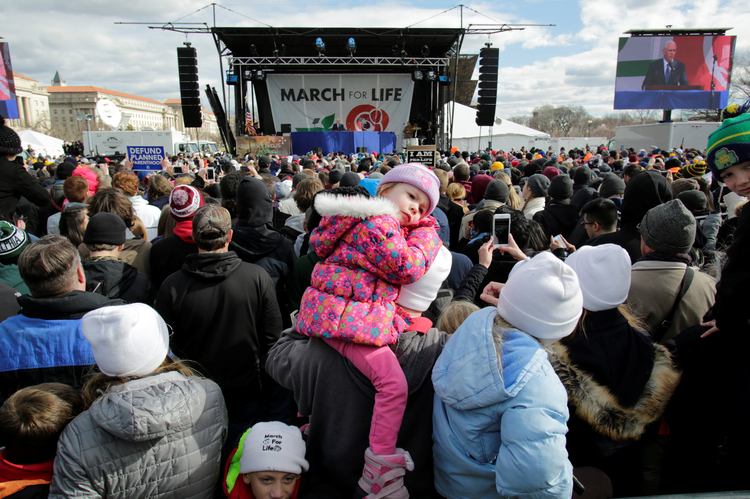 A child rests as U.S. Vice President Mike Pence speaks during a rally at the annual March for Life in Washington Jan. 27. (CNS photo/Yuri Gripas, Reuters)

Political and religious heavyweights rallied pro-life demonstrators gathered in Washington, D.C., on Friday during the 44th annual March for Life, an event held each year protesting the 1973 Supreme Court decision legalizing abortion in the United States.

In his first major address since being sworn in on Jan. 20, Vice President Mike Pence received raucous applause when he said that President Donald J. Trump would announce a nominee to the Supreme Court next week “who will uphold the God-given liberties enshrined in our Constitution in the tradition of the late and great Justice Antonin Scalia.”

Justice Scalia died nearly a year ago, but the Republican-controlled Senate refused to hold hearings for former President Barack Obama’s nominee. The president said earlier this week that he would announce his pick next Thursday, the same day as the National Prayer Breakfast.

Mr. Pence, the first vice president to address the March for Life, said Mr. Trump is already making good on campaign promises to pro-life voters. He pointed to an executive order signed by Mr. Trump on Jan. 23 that reinstates a ban on using federal money to pay for or promote abortion overseas.

The vice president said “life is winning again in America,” telling the crowd they have in Mr. Trump “a president who stands for a stronger America, a more prosperous America and a president who, I proudly say, stands for the right to life.”

Mr. Trump tweeted his support of the march from his personal account on Friday:

The #MarchForLife is so important. To all of you marching --- you have my full support!

Critics of the president, however, say that his proposals to ban refugees from entering the United States and repeal the Affordable Care Act call into question his claims of being pro-life.

Following Mr. Pence’s remarks, Cardinal Timothy Dolan of New York took to the podium to pray, thanking God “for the gift of a nation where life itself is considered an inalienable right and the dignity of each human person a self-evident truth.”

This was the cardinal’s second public appearance in Washington in as many weeks. He was on hand at at Mr. Trump’s swearing-in ceremony to pray for wisdom for the new president.

The night before the march, the U.S. Conference of Catholic Bishops hosted the National Prayer Vigil for Life at the Basilica of the National Shrine of the Immaculate Conception.

Preaching at the vigil, Cardinal Dolan meditated on the Italian and Spanish term for shrine: “Sanctuario.”

It is fitting, he said, that so many are gathered in solidarity with the pro-life cause in the sanctuary of the shrine of the Immaculate Conception. He connected the idea of sanctuary to the way the church and the nation have been a sanctuary for so many seeking refuge, tying together the church’s anti-abortion beliefs with its fight to protect migrants and refugees.

“Today, refugees and immigrants continue to believe that this nation is still a sanctuary as they arrive with relief and thanksgiving, and we pray this evening they are never let down,” he said.

“We come together this sacred evening in a church we claim as a sanctuary, in a land historically termed a sanctuary, on a planet the Creator intended as a sanctuary,” he continued. “Why? To reclaim the belief that a mother’s womb is the primal sanctuary, where a helpless, innocent, fragile, tiny baby must be safe, secure, nurtured and protected.”

The Jesuit Conference of Canada and the United States held a Mass for Life on Friday morning at St. Aloysius Gonzaga Church, celebrated by Bill Muller, S.J., president of the Jesuit Schools Network.

We all want to belong, Father Muller told the congregation, comprising many pro-life high school and college student groups. People of all races, sexual orientations, creeds and parties, he said, seek recognition and acceptance.

“The problem is that not everyone in our crazy, wonderful human family do see all,” Father Muller said, adding that Christians must stand up for those whose suffering goes unnoticed and to bring attention to their cause. Today, he explained, we are doing that for the unborn.

He preached on the Gospel passage about the power of faith the size of a mustard seed, saying that the March for Life may seem relatively small compared to other protests, but noted that, “all the kingdom of God needs are tiny seeds.”

More: Pro-Life / US Church / US Politics

What a difference a new team in the White House has made for the prolife movement. There is hope that hearts and attitudes will change for a better America and the culture of death will no longer be tolerated.

I am a family physician, a woman, and a practicing Catholic. No matter if one is pro-birth or pro-choice, women deserve the respect to make their own decisions about their life and that of their unborn child. It saddens me when bishops have made this a political issue. It is a moral issue that belongs between the woman and her doctor and her God. As Pope Francis has made clear, respect for the freedom of conscience of each individual before God is a primary value in the Catholic Church. When will bishops stop playing politics and start to respect the consciences of individuals? Jesus said that we are to leave the judging to God. Who are these celibate men, who coverup the sexual abuse and rapes of children by their fellow clerics, to speak for women? We women can speak for ourselves and deserve the respect to be able to do just that.
Sincerely, Dr Rosemary Eileen McHugh, MD, MSpir

As a physician I have to imagine you would agree that human life begins at conception. So are you saying that a women's physician would advise her to seek death for her child in her womb and you believe as a Catholic that our God, who created us in His image and likeness would be OK with that too? I agree, people play politics (and religion) as it fits their need, but in this case I don't think its the Bishops who are doing it. Yes, the Pope speaks of freedom of conscious and it is based on a morality where sanctity of life is an absolute ethical value to uphold. As a Catholic woman, I am no part of the "we women" and no one has a right to presume to be speaking for all women in any regard. I understand women have a legal option to choose abortion but that does not make it right or moral. I respectfully disagree with your statement.

Rosemary, as a doctor and a Catholic you must know that life begins at conception. To equivocate that basic fact is beneath your station.