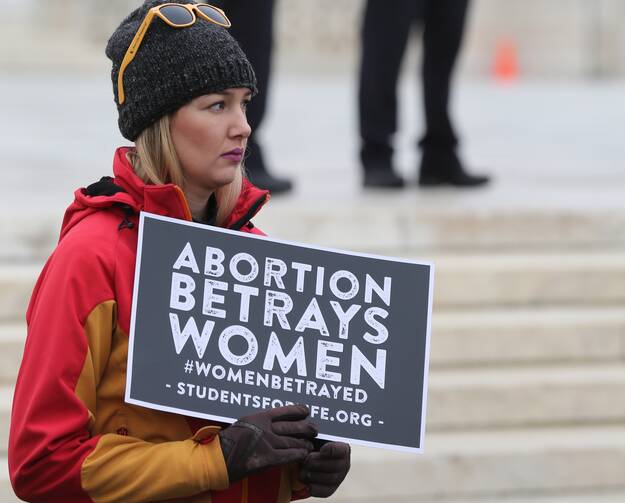 A young woman with Students for Life holds a sign outside the U.S. Supreme Court prior to the Women's March on Washington Jan. 21. (CNS photo/Bob Roller)

A long-pursued ambition of the nation's right-to-life movement got a step closer to reality on Jan. 24 when House Republicans voted to approve a resolution that seeks to make the Hyde Amendment permanent. H.R. 7, the “No Taxpayer Funding for Abortion and Abortion Insurance Full Disclosure Act,” passed by a bipartisan vote of 238 to 183.

The bill’s author, New Jersey Republican Chris Smith, co-chair of the bipartisan Pro-Life Caucus, speaking in support of the bill from the House floor, said that the Hyde Amendment has saved 2 million lives over 40 years.

“Two million people who would have been aborted instead survived because public funds were unavailable to effectuate their violent demise while their mothers benefitted from prenatal health care and support,” Mr. Smith added, according to a statement at his congressional website. “We are experiencing a megatrend in America—consistently reflected in polling data—that the American public not only does not support taxpayer funding for abortion, but the public increasingly supports actions to protect unborn children and women from the violence of abortion.”

On the house floor on Jan. 24, he said, “Defense of the unborn child is the human rights issue of our times, adding that ultrasound technology has “shattered the myth that somehow an unborn child is anything but human and alive.”

The proposed law will end the “annual battle” over Hyde and related measures, Mr. Smith said, and “takes out of Obamacare the facilitation and funding of abortion.”

Democratic critics called the bill misguided, heavy handed and an attack on women’s right to privacy. Many charged that the measure would have the net effect of blocking people from acquiring health coverage of their choice. Nydia Velázquez, a New York Democrat, said, “This bill will affect millions of women who purchase insurance with their own money,” turning back the clock on women’s reproductive rights.

The measure goes before the Senate next. The president’s signature seems assured if the bill survives the Senate. During his campaign, President Donald J. Trump said he supported the idea of making Hyde permanent law and ending the annual debate over the amendment.

The Hyde Amendment prohibits the use of federal monies in securing abortions under most instances, except to save the life of the woman or if the pregnancy was a result of rape or incest. It has been approved annually since it was first introduced in 1976. In recent years, the amendment has been targeted by pro-choice groups and its repeal was specifically sought for the first time as part of the 2016 Democratic Party platform. Candidate Hillary Clinton called for the end of Hyde during her unsuccessful campaign.

As the annual March for Life approaches on Jan. 27, the House vote was the second abortion-related development out of Washington likely to encourage members of the pro-life community. On Jan. 23, Mr. Trump signed a memorandum reinstating the so-called Mexico City Policy, prohibiting U.S. foreign aid money from being distributed to any global health program that provides or counsels abortion.

Criticizing the H.R. 7 vote and the Mexico City reinstatement, Rep. Sander Levin, a Michigan Democrat, charged, “We are seeing 48 hours of reckless disregard for women’s health.”

According to a Marist survey sponsored by the national Knights of Columbus released this week, Americans overwhelmingly oppose the use of tax dollars to support abortion in other countries (83 percent) and more than six in 10 Americans (61 percent) oppose the use of tax dollars to fund abortions in the United States. Nearly three-quarters (74 percent) of respondents say they want abortion restricted to, at most, the first trimester.

In a statement released on Jan. 23, Knights of Columbus C.E.O. Carl Anderson said, "There is a consensus in America in favor of significant abortion restrictions, and this common ground exists across party lines, and even among significant numbers of those who are pro-choice.

"This poll shows that large percentages of Americans, on both sides of the aisle, are united in their opposition to the status quo as it relates to abortion on demand. This is heartening and can help start a new national conversation on abortion."

Let’s clarify something up front, particularly when it comes to Roman Catholics and their ‘spin’ on Pro-Life, what it should be labeled is PRO-CONCEPTION because that's what it is! As a Christian demographic they’ve NEVER bought in to contraception, nor do they put much energy into support of post-birth women and their families.. They may promote infant adoption, but for a mother that wants to keep her child, their Party of choice, the GOP, wants to squeeze such family welfare to zero, wipe their hands of it, and pass the hat to charities.

When I hear the Roman church , becomes the LEADER in pushing adoption from their Pro-Life pulpits for ALL aged children, not just infants, re-think their bankrupt policies on contraception and speak loudly on government’s obligation regarding the poor,, only then will I reconsider a place for them at the table of reproductive rights and obligations and arguments on the sanctity of life.

A Catholic can disagree with various moral teachings for good reasons and remain a faithful Catholic. As for the Vatican, it will take time to change certain moral teachings. This is not new. Witness that Holy Communion for the divorced and remarried without an annulment was forbidden. Now, it is permitted under certain circumstances. This should give hope to the future when perhaps other moral teachings or their pastoral application will be changed.

I will hold a place at the table for the love and mercy of Jesus Christ, and His body the Church, regardless of the issue under consideration.

I don't think the term 'GOOD REASONS' was ever mentioned in my 'green covered' catechism. I've never heard to the term 'GOOD REASONS' spoken from the pulpit for that matter either. Bless me Father for I have sinned but I had 'GOOD REASONS' and 'CERTAIN CIRCUMSTANCES' .OK then ....... "Go my son, no need for absolution because you haven't sinned in the first place" I think the Roman Church needs to make its dogmatic ground rules a little clearer. Don't you?

I would like to see abortion reduced in our country, but not by regulation, but by kindness and compassion. Rather than making laws that restrict abortion, why don't we show that we care for the poor, especially poor mothers and poor children. A good place to start might be fixing the education system so that children who are born in poverty have a chance to learn and grow and lift themselves and their families out of poverty. Instead we regulate abortion and ignore the child once she is born.

I agree. I have yet to hear of a compassionate, pastoral--not to say workable--plan from pro-life activists on the re-criminalization of abortion.

I agree with what you have written. As a family physician and as a victim/survivor of a sexual assault by a Carmelite priest years ago, I believe the hierarchy have lost their moral compass for many years, since they worship the Catholic Church as an institution with its man-made rules, and ignore Jesus and his command to protect the innocence of children. Popes protect the sexual predators among them and leave the children to live damaged lives, These men do not represent Jesus to me.
Sincerely, Dr Rosemary Eileen McHugh, MD, MSpir

...ultrasound technology has “shattered the myth that somehow an unborn child is anything but human and alive.
Mr. Clarke:
Please precisely define human for us,
and cite scientific documentation which compels this definition.
Thank you.

I am a family physician and I ask politicians to drop contraception and abortion from politics. The churches have a right to discuss those issues, but those issues must not be decided by politics and laws, since politics and laws take away from the respect that needs to be given to individual conscience before God. It is most unfortunate that Catholic bishops have used the issue politically for so long, when they have no clue about women and their reproductive needs. Very sad that lay men can be so manipulated by the Catholic bishops, who do not respect individual conscience.
Sincerely, Dr Rosemary Eileen McHugh, MD, MSpir