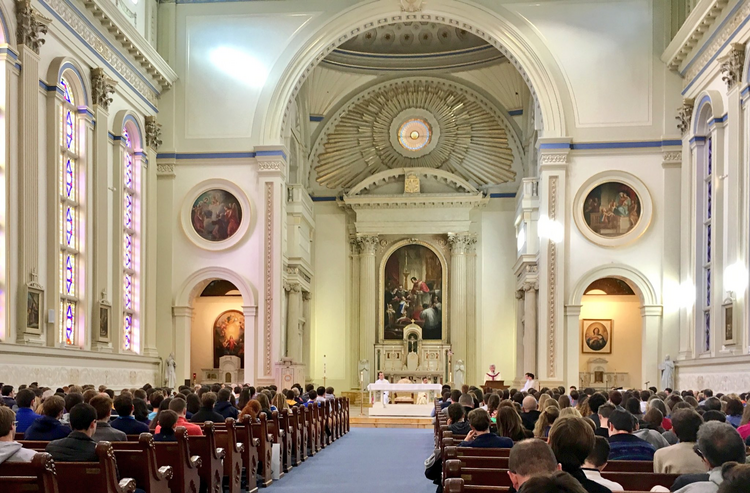 This morning, student groups from Jesuit schools and other Catholic schools from across the country filed into St. Aloysius Gonzaga Church in Washington, D.C., on the campus of Gonzaga Preparatory School, a Jesuit high school, to attend a “Mass for Life” sponsored by the Jesuit Conference of Canada and the United States.

“We gather people here as a way to express our Jesuit identity,” said Father Bill Muller, president of the Jesuit Schools Network, who preached at the Mass, “before going to the march with the rest of the Catholic world and the rest of the people who are interested in this cause.”

“We’re at the Mass for Life to start off our day,” said Johnny McBride, president of the Advocates for Life group at Assumption College in Worcester, Mass., “The best way to start it is with Jesus.”

Who Counts as a "Real Woman" at the Women’s March on Washington?
Jane Sloan Peters

Being pro-life is for all people, not just Catholics, said Julia Mangan, a member of the pro-life group at Rockhurst University in Kansas City, Mo., “but it’s kind of nice to be able to go to Mass and tie it back to our faith before we go out and march with everyone else.” Ms. Mangan’s group read the petitions at the Mass.

“As Catholics we celebrate Mass to find strength, communion, and really to be one with each other,” said James Dooley, a member of Holy Cross Students for Life from the College of the Holy Cross in Worcester, Mass., “so that we go forward today on this important day to respect the dignity of human life.”

“I hope to leave today with a prayerful, strong spirit, and that’s going to bring us to further commitment to love and to life.” added Elinor Reilly, co-chair of the Holy Cross Students for Life.

Katie Samalis, another student from Assumption College, prayed for “power and peace,” and “that we can all stand in unity together for this great cause.”

“I want to be ready for this march, ready to support life around the country, and hopefully change some minds,” Patrick Loper, a student from Rockhurst High School in Kansas City.

Father Muller, who celebrated the Mass with Timothy P. Kesicki, S.J., the president of the Jesuit Conference of Canada and the United States, hopes that the students took away two things from the Mass for Life. The first is that they “notice that they’re not in this alone from one school to another, but we are a network of Jesuit enterprises,” said Father Kesicki. The second is that those attending “have a better understanding that we’re talking about not just the unborn; we’re talking about people who need help everywhere, anywhere; we’re talking about a whole spectrum of human life, beginning to end.”

A blessed start to a day that elicits mixed feelings in me every year. There is no question of the legitimacy of the issue at hand. Life in all its forms is in serious need of defense. For decades we have marched on Washington with presumed pro-life Presidents notably absent EVERY year. We have yet to make significant headway at the national level in policy change. The young people who march are indeed the key to the future of this dilemma, of this crusade, if you will, to change the culture that surrounds us. Might we re-direct energy to the point where relationships begin, especially the types of relationships that seem to lead to unwanted pregnancies, so that we might nurture and develop strong, healthy Christian women and men who treat their sexuality as something more than a muscle to be exercised? The Catholic schools are perfect proving grounds for just such an initiative, one that separates us from the disposable approach to life and relationship so prevalent in our culture. Formative religious activities that concentrate on right relationship in the eyes of God might produce more tangible and lasting results than marching on the nation's capital to a chorus of slogans that fall on too many deaf ears. Just at thought. God bless those who march, may their efforts not go unrewarded. They certainly do not go unnoticed!

This article gives me hope with Jesuit schools. My daughter is in 3rd grade and lately I've been losing faith the HSs are worth the money.