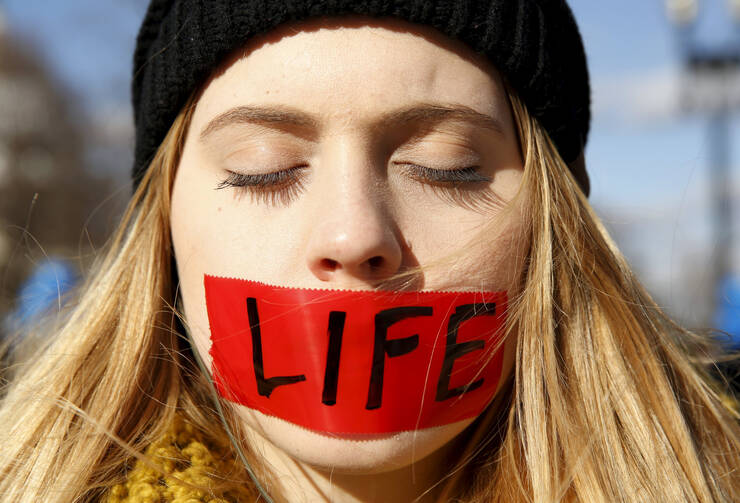 Nell Andrzejewski holds up an image of Our Lady of Guadalupe as thousands of participants gathered at Chicago's March for Life rally on Jan. 15. (CNS photo/Karen Callaway, Chicago Catholic)

"When you ask Americans what they think of abortion ... you get very, very strong numbers in favor of restrictions," said Andrew T. Walther, vice president of communications of the Knights of Columbus, during a Jan. 23 news conference livestreamed to reporters.

The Marist survey of 2,729 adults was conducted in December and sponsored by the Knights of Columbus. It contains breakdowns by political affiliations and ethnicity but not religious beliefs, so there was no information on how many respondents were Catholics.

Fifty-two percent of the respondents indicated that they thought of themselves as "pro-choice," while 42 percent self-identified as pro-life. But when the questions became more detailed on abortion policies, the numbers shifted.

Across political and ethnic lines, overwhelming majorities of respondents indicated they would like "significant restrictions." That included 91 percent of those who called themselves supporters of President Donald J. Trump, and 55 percent of those who identified themselves as Hillary Clinton supporters. The poll further showed that 79 percent of both African-American and Latino respondents favored significant restrictions.

Further, 74 percent said they wanted the Supreme Court to rule on these restrictions, indicating support for overturning the court's 1973 Roe v. Wade ruling, which legalized abortion virtually on demand.

Eighty-three percent said abortion should be allowed only to save the life of the mother, while 77 percent said it should not be permitted under any circumstance.

Fully half the respondents thought abortion "has a negative, long-term impact on a woman's life," while 19 percent were unsure.

Fifty-nine percent believe that abortion limits were either "important" or an "immediate priority, and the same percentage agreed when asked if they thought abortion was "morally wrong."

The same level of support was expressed for an abortion ban after 20 weeks of pregnancy, and 60 percent believed that medical professionals with moral objections should not be legally required to provide abortion services.

The 44th annual March for Life, which draws thousands to Washington to commemorate the anniversary of the Supreme Court's Roe decision, will be held on Jan. 27.