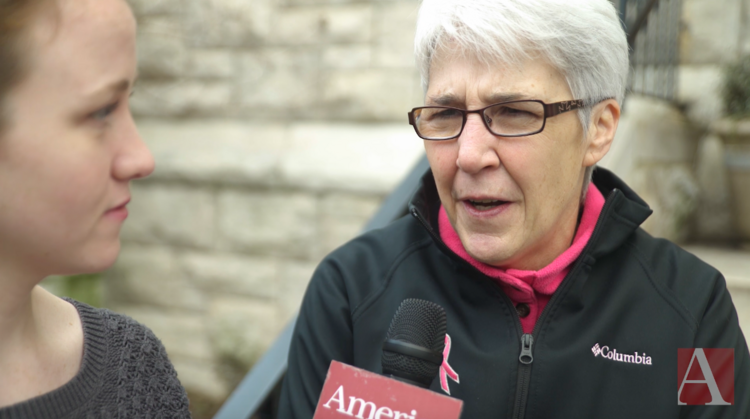 Deborah Troillett of the Sisters of Mercy.

Early this morning crowds of women donning pink hats and carrying protest signs with slogans like “I’m with her” and “Love trumps hate” gathered in groups around capitol hill in Washington, D.C., as well as in cities across the country, to prepare for the Women’s March on Washington and its sister marches.

Over 500,000 men and women filed in to listen to women speak on a host of social justice issues, from immigration reform to environmental responsibility. While the exclusion of pro-life feminist groups from the march’s list of sponsors discouraged some Catholics from attending this event, several groups of women religious came to champion their respective social justice causes. Sr. Simone Campbell of the NETWORK Lobby for Catholic Social Justice even spoke at the rally that preceded the march.

For some of these Catholic groups, the day began with a Mass at St. Peter’s on Capitol Hill celebrated by Rev. Jordan Kelly, O.P. He pointed out the providential sign that this march should fall on the feast of St. Agnes, who, having vowed her life to Christ against the wishes of her father, walked naked through her village to protest her betrothal.

“This little girl shows us the dignity of womanhood,” said Fr. Kelly, who also cited the work of religious sisters as a powerful influence in his life and the lives of others.

The power of Christ can change the hearts and minds of men and women, Rev. Kelly told the church filled with people about to go out and protest for that change.

While he didn’t care for some of the more “grotesque” protests signs he saw on his way to church, some of the protesters’ signs caused him to think, “You’ve got one person thinking today,” adding, “that’s a start.”

“We want to be faithful to Pope Francis’ call in this new year to act with nonviolence, to be peacefully gathered, to stand in unity, to stand in prayer, to stand based in our belief in the gospel and what Jesus calls us to be,” Sr. Deborah added. “Pope Francis, in his letter to President Trump, called all of us in this nation to claim our deepest values, respect for human dignity and freedom. So we want to stand in that place with women and with all people who in any way experience inequality or the lack of opportunity to live their God-given dignity.”

Sister Patricia Chapell walked alongside her fellow Sisters of Notre Dame de Namur while also walking as the executive director of Pax Christi USA, the national Catholic peace with justice movement in the United States, and as an African-American Catholic woman.

“I believe in the social teachings of the Catholic Church. We basically want to be able to say to our newly elected president that we certainly believe in social justice issues,” Sr. Patricia said. “And particularly as women we’re concerned about the economic and racial polarization that has been a byproduct of what has happened.”

The Sisters of St. Joseph, an order devoted to social justice work also participated in the march. Sr. Helen Kearny, president of the Sisters of St. Joseph in Brentwood, N.J., said, “Our mission is one of unity, and we feel very strongly that being together with people who respect life, dignity, peace [and] justice, [and] that powerful witness of everybody to speak positively, certainly to our elected government, but to one another, and to say that we have the power to stand up for the things that we believe in, that will foster the common good, that will help our environment, that will help bring peace to our world and also [help] to avoid the discrimination and poverty that is so rampant.”

Sr. Karen Burke, C.S.J., who organized her community’s trip to Washington, added, “It was important for us to be in community with all of our sisters, and knowing that it’s a large group and a diverse group, and we want to embrace all of our sisters today. It gives us a lot of energy for the work that we do when we see all of these women together supporting us, and hopefully we’re supporting them.”

“I think one of the things we might have been discouraged about was we didn’t hear enough about ‘We the people’ in this last election cycle,” concluded Sr. Janet Kinney, C.S.J., and executive director of Providence House. “And so it’s really important to people that we try to mend the wealth and inequality gaps that are throughout this country and that we stand behind every marginalized group of people that needs our support and our help.”

Clarification, Feb. 10: Other versions of St. Agnes’ story differ from the one described above. In one she is dragged naked through the streets by her persecutors. In another, having been condemned, she walks to her place of execution naked. In all cases, God allows her hair to grow to cover her nakedness, saving her from immodesty.

Well done! Unification, not polarization, is badly needed today and these were effective first steps. We are many parts but we are all one body. Thanks to all who participated.

The future is female.“We’re here to support women’s rights,”
Join the resistance!
For requested people, we recently relaunch our inspiration
campaign:https://teespring.com/a-woman-s-place-is-in-the-res

I pray the good Sisters will be joining the Right to Life March in DC this week as well. Sometimes I think they send many mixed messages. I don't agree the future is female...I believe it is with God.