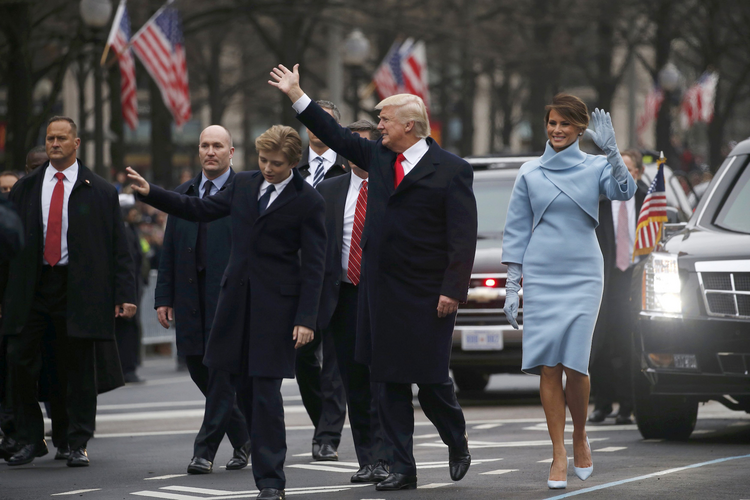 U.S. President Donald Trump and first lady Melania Trump wave as they walk with their son, Barron, along Pennsylvania Avenue during the Jan. 20 inaugural parade from the U.S. Capitol in Washington. (CNS photo/Jonathan Ernst, Reuters)

Pope Francis said he wants “to wait and see” what Donald J. Trump does now that he is president of the United States and does not wish to pass any judgment in advance of events.

“I don’t like to anticipate what happens or to judge people in advance,” he told El Pais, the Spanish daily, in a 75-minute interview, in which he also spoke about populism. He gave the interview as the inauguration ceremony was under way in Washington, D.C.

The newspaper’s Rome correspondent Pablo Ordaz had noted much “tension” in the world as Mr. Trump takes over as president and asked what his view was on all this. “Let us see what he does," Pope Francis said. "I will see how he acts, what he does, and then draw my opinion.”

Francis counselled against an alarmist mentality at what the new president might or might not do. He emphasized that Christianity “is either concrete or it is not Christianity,” adding that judgments should be based on “concrete things.” He lamented the fact that “we have lost a lot this sense of the concrete.”

Recalling that some days earlier an intellectual had told him that “this world is so disordered because it lacks a fixed point.”

Francis said, “It is precisely the concrete [things] that give us fixed points. What you do, what you decide, how you move.” He concluded that “it is for this reason, faced with this [situation]” that “I wait and see.”

Pope Francis also sent a message to the 45th U.S. president, wishing him “cordial good wishes and the assurance of my prayers that Almighty God will grant you wisdom and strength in the exercise of your high office.” The Vatican released this message as soon as the inauguration ceremony ended.

On a wider front involving other countries in Europe and America, El Pais asked if Pope Francis were concerned about the rise of populist, anti-establishment movements that exploit the fear of people regarding the future and propagate a xenophobic message. El Pais cited Mr. Trump as the most striking case but also mentioned politicians from Austria and Switzerland.

Pope Francis repsoned by noting that populism means “different things” in Latin America, varying from country to country. He recalled what happened in Germany in the early 1930s when Adolf Hitler emerged, stating that the leader “did not steal power, he was voted [into power] by the people, and then he destroyed his people.”

“That’s the danger,” Francis said. “In moments of crisis, discernment doesn’t function and for me this is a continuous point of reference. We seek a savior that gives us back [our identity] and we defend ourselves with walls, barbed-wire fences. Or whatever it may be, from other people who could take away our identity. And this is very serious. For this reason, I always try to say: dialogue among yourselves, dialogue among yourselves.”

Francis said the case of Germany in 1933 “is typical—a people who were in crisis and sought their identity" and then “this charismatic leader appears and promises to give them their identity, but he gave them, a distorted identity, and we know what happened.”

Pope Francis went on to ask, “Can the borders [of a country] be controlled?” His answer: “Yes, every country had the right to control its borders, [to control] who enters and who leaves, and the countries that are in danger—from terrorism or something of that kind—have even more right to control them even more, but no country had a right to deprive its citizens of dialogue with its neighbors.”

Note: (Translation from the Spanish was done by the author and could be subject to revision).

Well, Your Holiness...
We already know that Trump:
. has no regard for a free press
. threatens his political adversaries with violence
. incites violence against political adversaries
. invited an inimical foreign power to hack an adversary's emails
. has emboldened Netanyahu to rape East Jerusalem and kill Two-State
. cultivates hatred of, and violence towards, society's out-groups
. is a misogynistic pig
. is peculiarly obsessed with virile authoritarian strongmen
. is a militant NATO-busting Europe-contemptuous nationalist
. is a thin-skinned bully who traffics in paranoid conspiracy theories
. is a scam artist who preys upon aspiring real estate agents
. suborns and rewards self-dealing conflicts of interest

But, sure...
Now that this monstrosity beds with a sycophantic Congress and a corrupted Supreme Court, will be protected by a private security force, and has summoned all that is most base and depraved within this nation, we are to wait and see what wonders he might work upon this nation.

Please tell us, Most Holy Father:
What is it that you know about this preposterous freak
that merits a suspension of judgment.

Derrick - The Holy Father always errs on the side of mercy and redemption. Of course Trump has displayed many sins, and I opposed his election for them. But, for the good of the world, and for his own good, he might do some good. For example, he might oppose & reduce abortion, in actions and not just words. He might dramatically improve the working lives of the millions left behind in the economic trade winds, and his policies and appointments might thoroughly subdue ISIS. I would have a change of heart about him if he did those three things. I think that is what Pope Francis is hoping for.