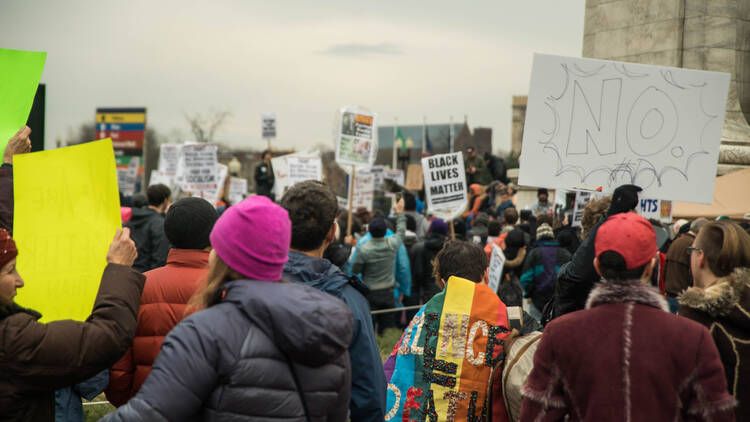 Protesters gather on Jan. 20 outside of Union Station during the 2017 Presidential Inauguration. (Photo by Nick Genovese)

Americans viewing the inauguration of Donald J. Trump as the 45th president of the United States presented a spectrum of emotions—from celebration to dread to defiance.

Catholics participating in inauguration events in Washington, D.C., offered just as many different responses. Donning “Make America Great Again” hats, some cheered. Others demonstrated with signs and chants. Another group put their peacemaking skills into action.

Dressed as a patriot, in a Revolutionary War-era hat and coat, Richard Howell carried a “We Love Trump” sign. Mr. Howell, a sophomore at Georgetown University, said he was inspired by the inauguration, which he attended with Hunter Estes, a fellow sophomore and leader of the university’s Knights of Columbus chapter.

Mr. Estes, wearing a hat in support of Mr. Trump, felt the new president’s message of returning power to the people of America from Washington elites was most attractive. Partisan lines are drawn across the country, he said, even on Georgetown’s campus.

“Oftentimes, it seems that we can’t even have a dialogue,” Mr. Estes said. That is detrimental to the public good, he added, “unless we can move forward with understanding and commitment, assuming that all people have good intentions for their country.”

The church can be a place for dialogue, even with the sharp divide among churchgoers, Mr. Estes said. Mr. Howell said no political party reflects all of the views of the Catholic Church, which presents an opportunity for coming together. He hopes to host events with College Democrats to discuss political topics.

Near an inauguration entrance gate crowded by chanting protesters, Havens Clark said she felt torn and unable to support Trump during the election. The Georgetown freshman and member of the College Republicans went to the inauguration for its historic significance.

“As a Catholic, I felt called to look at the election with an open mind and also look at it with a Jesuit-plus perspective,” she said. Ms. Clark added that the country has both Catholic Democrats and Catholic Republicans, who must work across the aisle in the new administration.

“In Congress, people are so divided because of the political parties,” Ms. Clark said. “We should, as Catholics, join together behind the issues that we support, but also recognize that everybody has dignity and no one deserves to be treated with less than that.”

RELATED: Before the Inauguration, a Moment of Prayer

Paul Magno, wearing a Boston Red Sox windbreaker, stood outside Union Station with Jack McHale, who sported a New York Yankees cap. The longtime friends said they vehemently disagree about baseball, but they both oppose Trump as peace- and justice-oriented Catholics.

“The new administration has given us a very long list of things to be concerned about and pray about and work against,” Mr. Magno said, detailing Mr. Trump’s divisive comments about minority groups and his statements advocating military aggression by the United States.

The political polarization seen during the inauguration is reflected across the country as well as in the church, Mr. Magno said, but this is “not reflective of the Gospel itself.” Rather, he said, “it’s reflective of what people like better than the Gospel, which is their own point of view.”

Mr. Magno, who wore a large wooden cross under his windbreaker, said prayer has been a solution. However, he said, “you don’t retreat into prayer as a way to avoid your responsibility in the world. You make it your foundation for the action you take to make the world more holy.”

Mr. Magno and Mr. McHale support the antiwar National Campaign for Nonviolent Resistance. But they are also trying to promote a consistent ethic of life, which opposes capital punishment, abortion and assisted suicide. Mr. McHale’s prayer life deepened during the presidential campaign, he said, as neither candidate appeared to support nonviolent solutions.

“We would be here if Hillary was elected,” he said, his only protest paraphernalia a plain black pin with “Stop Drone Killings” in white letters. The country’s use of drones as weapons and its interventions in the Middle East trouble him, he said. “Militarism knows no Republican and no Democrat.”

Lily Ryan, a junior studying government at Georgetown University, said she felt responsible as a Catholic to protest the inauguration. She walked more than 10 miles, she said, traveling from campus, marching downtown and walking back. She said she protested for the recognition of labor rights and worker rights, topics she finds fundamental to Catholic social thought.

“I see a fundamental difference within the Catholic Church of what people prioritize,” Ms. Ryan said. “To me, there’s nothing more pro-life than health care and affordable health care.… I had to be out there today, fighting for social justice, fighting for what’s right.”

The Trump administration and congressional Republicans are working to repeal the Affordable Care Act; without a replacement, 18 million Americans would lose health insurance in the first year, according to the Washington Post. Like many other Catholics, from both parties, Ms. Ryan said work must be done to find common ground on important political issues.

Spreading a message of peace was central to the work of Eli McCarthy and other members of the DC Peace Team. The group of more than 200 members assigned people to protests throughout the city to intervene if confrontations intensified between opposing groups. Their goal was to build empathy, which can be challenging, Mr. McCarthy said as a protest began to form behind him.

“This is about putting ourselves at some level of risk, and [we] try to model and sort of witness what peacemakers can be,” said Mr. McCarthy, a Justice and Peace Studies professor at Georgetown University.

People who disagree, especially Catholics, should take action to bridge the divide, Mr. McCarthy said. He advises Catholics to center themselves in prayer, listen to others and ask questions to better understand differing views.

“The most basic thing [for people to do] is to pray for people that they disagree with and to really try to feel that prayer and mean it that you care about their wellbeing,” he said.

RELATED: Pope Francis Calls for a “Politics of Nonviolence” in Annual World Day of Peace Message

The work of the Peace Team is not about winning or losing, Mr. Engelking said, but rather about finding a third way of dialogue. His mission may be difficult, though: he has worked for climate legislation and immigration reform, two causes that may suffer setbacks during the Trump administration.

Wyatt Massey
@News4Massmassey@americamedia.org
Show Comments (
1
)
Comments are automatically closed two weeks after an article's initial publication. See our comments policy for more.
Lisa Weber
6 years ago
I am glad to see people engaged in the political process. That alone gives me hope.