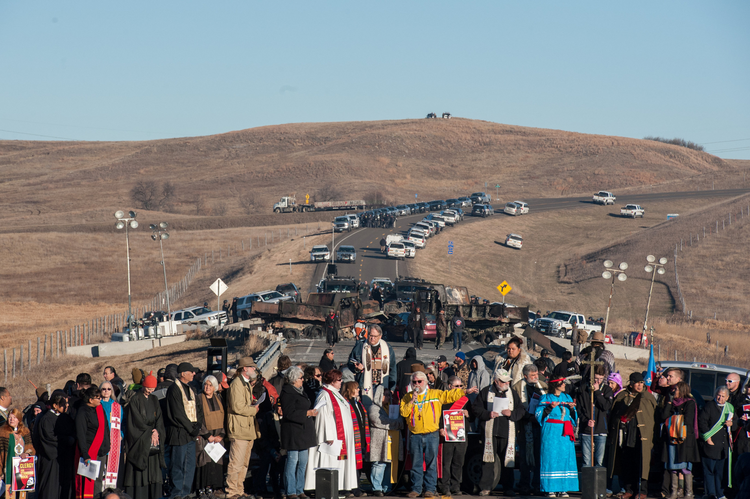 Clergy of many faiths from across the United States participate in a prayer circle Nov. 3 in front of a bridge in Standing Rock, N.D., where demonstrators confront police during a protest of the Dakota Access pipeline. (CNS photo/Stephanie Keith, Reuters

Americans might be forgiven if they thought they had put the great pipeline wars behind them with the abandonment of the giant Keystone XL. Concern that the lives of U.S. citizens were likely to be disrupted in the service of a foreign oil company was among the arguments that eventually doomed Keystone. That must seem all too ironic to the members of the Standing Rock Sioux community in their months-long resistance to the $3.8 billion Dakota Access pipeline, which, they contend, is a threat to drinking water and Sioux sacred sites in its path.

President Obama’s call on Nov. 2 for the U.S. Army Corps of Engineers to revisit the pipeline route offers a welcome way out of what has become an increasingly tense confrontation. The Texas-based company Energy Transfer Partners should seize this opportunity to de-escalate the crisis. So far company officials have refused to budge so local police have to act as corporate enforcers against Sioux and other Native American protesters and environmentalists who have joined the fray.

The optics of the stand-off, pitting militarized officers in riot gear against Native Americans, could not be any worse. The sight invokes the most gruesome and unjust incidents from the past and suggests that Native American communities continue to be ignored and devalued in the present. It is hard to imagine the concerns of another sovereign state being similarly dismissed by U.S. government officials and energy producers.

The president’s intervention should also be welcomed by pipeline resisters, who could participate in practical negotiations toward a resolution of the conflict and disassociate themselves from protesters who are seeking to terminate all extraction and movement of fossil fuels.

The Editors
Show Comments (
1
)
Comments are automatically closed two weeks after an article's initial publication. See our comments policy for more.
Ernest Martinson
4 years 3 months ago
President Obama as Commander in Chief can call on the U.S. Army Corps of Engineers to revisit the Dakota Access pipeline route. He can also, using the bully pulpit, call on citizens and Congress to enact a carbon tax that could plug the pipeline. If income taxes on corporations such as Energy Transfer Partners could be cancelled, fossil fuel corporations could find it even more profitable to transfer to renewable energy without further government micromanagement.