Once accepted, now rejected, Haitian immigrants are left in limbo 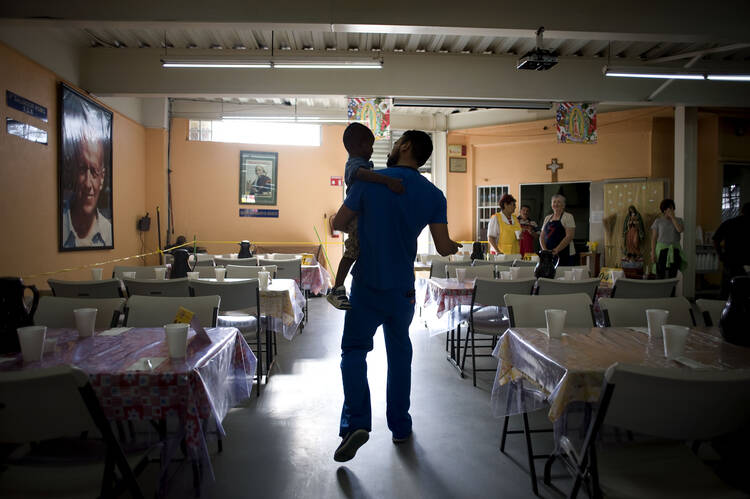 A volunteer at the Desayunador Salesiano "Padre Chava" shelter in Tijuana, Mexico, plays with a young Haitian boy after breakfast June 25 in the shelter. (CNS photo/David Maung)

“Few in the world have endured the hardships that you have known,” President Barack Obama said to the people of Haiti in the wake of the earthquake that devastated the country in January 2010. “Long before this tragedy, daily life itself was often a bitter struggle. And after suffering so much for so long, to face this new horror must cause some to look up and ask, have we somehow been forsaken?”

But now in San Diego, those words of President Obama are being repeated with enormous disappointment in the wake of an announcement by the U.S. Department of Homeland Security on Sept. 22 that the United States would no longer be granting temporary protection visas to survivors of the Haitian earthquake.

In the last five months, 5,000 Haitians have arrived at San Diego’s San Ysidro Port of Entry, mostly from Brazil, where they had been welcomed as a new source of cheap labor until the country’s recent economic and political instability. Thousands more wait across the border in Tijuana, Mexico.

In explaining the sudden change in policy, Homeland Security Secretary Jeh Johnson argued that conditions in Haiti “had improved sufficiently to permit the U.S. government to remove Haitian nationals on a more regular basis.” Yet few people familiar with the situation in Haiti seem to agree with that assessment.

Ginger Jacobs, immigration attorney and chair of the San Diego Immigration Rights Center, expressed shock. “The statement that country conditions have changed in Haiti...flies contrary to State Department reports released as recently as this month.” Ongoing news reports of a continuing cholera epidemic and the lack of a functioning government suggest, despite the secretary’s assurances, that not much has changed since the earthquake.

Questioned about the decision before Congress, the director of Immigration and Customs Enforcement, Sarah Saldaña, suggested that the policy shift had less to do with conditions in Haiti than with what Jacobs calls “the floodgates issue.” Saldaña told Congressman John Conyers that according to information she was receiving from government officials in Central America, as many as 40,000 Haitians were en route to the United States.

As for the thousands piling up at the border, Mexico is issuing only 20-day visas. Other Latin American countries are not accepting Haitian migrants or are expelling them. And because of its own dire circumstances, Haiti itself is not currently accepting deportees being sent back from other countries.

For displaced Haitians in San Diego and Mexico, the real emergency is what to do now. They have traveled thousands of miles, mostly by foot and through dangerous circumstances, because the United States promised to take them. Most have also exhausted all their resources just getting to the border.

“We are devastated,” says Pastor Bill Jenkins, head of the Christ United Methodist Ministry Center, which since May has provided temporary shelter and support to over 3,000 Haitian arrivals in San Diego—95 percent of whom have since traveled on, mostly to family in Florida or the New York area. “We think it’s just politics; immigration is the most divisive word in the English language right now, probably around the world.” The end result, he fears, is that “someone is going to be stuck with a terrible humanitarian crisis.”

For Jean, an earthquake survivor who arrived in August after a four-month trip with his pregnant wife—a trip that involved, among other hazards, scaling cliffs by means of hanging vines—Secretary Johnson’s characterization of Haiti today is deeply upsetting. “I am a professional; I went to school for what I do. If there was work there [in Haiti], why would I risk my life, my pregnant wife and my unborn child to come here?”

Jacobs doesn’t believe the change in policy will likely deter Haitians either. “I fear they’re going to try and enter through the desert,” she says. “And I think we all know there can be a lot of human tragedy that happens when people come through there.”

When Barack Obama promised in 2010 he would not forget them, Haitians believed him. Today they find themselves wondering once again, why are we forsaken?