The tumultuous history of labor, capital and Christian churches in Chicago 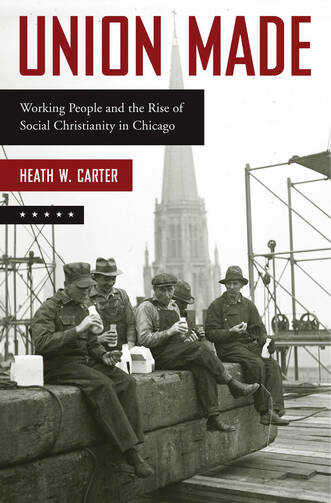 “Poverty exists...because the toiler does not receive a just and equitable proportion of the wealth which he produces.” These are not the words of 2015 presidential contender Bernie Sanders, but the 1867 cry of Andrew Cameron, member of the Chicago Typographical Union, rallying Chicago workers after the general strike of that year. Cameron went on to articulate one of the main themes of Heath W. Carter’s story, Union Made, in this harsh criticism of Chicago’s churches: Poverty exists “because the Church, through the paid toadies of employers, has denounced every attempt on the part of the working classes to assert their rights and remove the curse which has bound them hand and foot, and has prostituted the high and holy calling of a minister of Christ to the level of a village pettifogger.”

Ten years later, the Rev. Simon McChesney, pastor of Park Avenue Methodist, fell in with Cameron’s criticism when he argued against immigration, “Europe has been emptying her criminal classes upon our shores.” The Rev. Norman Ravlin at the Free-Will Baptist Church carries on in describing those working classes and organized unions as mobs of “communist offscourings,” “disorderly classes,” “roughs and thieves,” “lowest rabble” and “vicious element.” Substitute “Mexico” for “Europe” in Rev. McChesney’s remark above, and we are transported to the nativism of Donald Trump and other presidential candidates in 2016.

In this brief but incisive historical analysis, Heath W. Carter traces the tumultuous struggles among labor, capital and the Christian churches in the microcosm of ever-expanding Chicago from the mid-19th century to the early 20th. The focus is Carter’s exploration of the rise of “social Christianity.” Most studies of the rise of the “social gospel,” which flowered in the early 20th century, feature such dynamic middle-class Protestant theologians and leaders as Walter Rauschenbusch, Richard T. Ely, Josiah Strong, Washington Gladden and others. That movement did indeed involve the churches in the practical issues of the day by applying the Gospel message of Jesus to the causes of economic inequality and poverty, alcoholism, racial tensions, slums, unclean environment, child labor, poor schools and the danger of war.

Carter’s important contribution, however, involves turning the usual understanding of this dynamic movement, which died out in the early 20th century, on its head through examination of key roles of workers and unions in spite of the opposition and only occasional support of churches. Carter shows that ordinary believers fashioned the first social gospel: “But I do contend that working people played a much more essential role in this story than they have typically been accorded.” His telling of that story reads like a long character study, from the antebellum days of slavery to the tumultuous decades of the late 1800s, peppered by strikes, labor unrest, the Gilded Age of capitalism and the cozy relationships between mainline Protestant and Catholic leaders and the wealth lords of capital in Chicago.

Through extensive research (the notes alone cover 67 pages) of tracts, pamphlets, newspapers, labor magazines, church organs and published sermons, Carter is able to document the working-class origins of social Christianity. He fully explores “the documentary record” often ignored by others in their discussions of Protestant and Catholic leaders, noting that “the field [of labor and church histories] is in the midst of a major transition.” Carter’s short text is a key contribution to that transition.

As churches became more prosperous in the post-bellum period and into the Gilded Age (a term coined by Mark Twain to satirize the serious social problems “gilded” over by a thin layer of wealth), pastors and clergy were finding greater comfort in the arms and bosoms of the wealthy, with their sizable church donations. By the late 1870s and beyond, workers were forced in the spirit of a hardening industrial capitalism to farm out their “labor” as “free laborers.” Indeed throughout this period the main objection of church leaders to labor unions was that every man should be free to sell his labor without interference according to a “contract” between the individual worker and industry.

At the same time, Carter’s research reveals the anxiety of church leaders. Workers were moving away from churches to that archenemy, socialism. Indeed socialist leaders such as Eugene Debs and Mother Jones saw the connection between Jesus’ simple words challenging the rich and the plight of labor in Chicago and in the rest of the country.

Carter ends his tale of church and labor with a statement, a challenge and a question. The statement is simply that “now, in the early decades of the twenty-first century, American capitalism appears once more poised to overwhelm American democracy”—possibly a reference to the decline of unions and their subjugation by corporations. The challenge involves the future: “It remains to be seen whether present-day believers will quietly abide this state of affairs”; or as the question is put: “Whether it will at some point call forth a generation of prophets comparable to those that visited Gilded Age Chicago.”

Carter forges his history for both scholars and general readers through a fascinating historical journey of two characters struggling at odds and evens who eventually forged a strong but brief movement, a movement that played a role in the New Deal and later 20th-century struggles. One wishes he had listed the cast of characters involved—the particular churches, unions and corporations—in a preamble for easy reference. But importantly Carter shows in this brief, localized, historical setting how this possibility of social engagement emerged. In our current days of contract laborers, part-time employment, temp workers, loss of benefits, union decertification, growing income inequality and pushes for higher minimum wages, let the reader beware: This character study will challenge you, in any faith tradition, to take action.

This article also appeared in print, under the headline “Works in Progress,” in the April 4-11, 2016, issue.