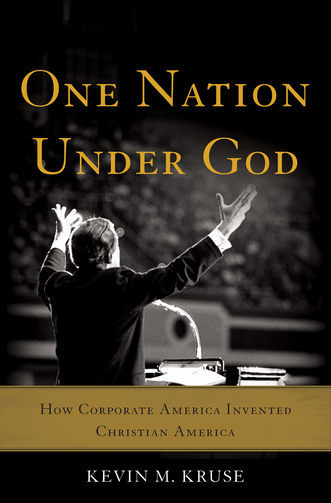 If the United States Constitution is determinative in the life of the United States, to conceive of the nation as being “under God” has to be not a matter of law but of sentiment. Were it a matter of law, civil authorities would have to penalize that large minority of citizens who do not believe in God or who do not want to be measured by the formal invocations of God in public life. To say that the “under God” claim is a matter of sentiment is not to downgrade it but to locate it as extra-Constitutional.

Through the years since the Constitution was adopted, there have been many attempts to take the sentimental notion that this is a nation under God and make it a legal claim. Not winning constitutional changes, many interests and individuals have looked for ways through which they can privilege faith and even particular faiths. In a fresh and revealing re-examination of the oft-studied career of the phrase “under God,” Professor Kevin M. Kruse of Princeton chooses not to concentrate on the canonical founding fathers, though they receive their due. Instead he focuses on the battles over the issue in and after the mid-20th century “Revival of Religion.”

The late conservative legal scholar Walter Berns contended credibly that the founders gave no legal place to “the establishment of religion,” but they did “establish commerce.” Many of their successors have dealt with commerce religiously. Kruse focuses on a major episode on this subject, as his subtitle makes clear: “How Corporate America Invented Christian America.” Corporate leaders—most of them Protestant—saw the advantage of promoting religion as the seal on national life and, during the Cold War, the necessary weapon against Communism. Also, in those mid-century years they celebrated “free enterprise.” In many texts that Kruse cites and events that he recounts, Christian America became an object of what Paul Tillich called “ultimate concern.”

Kruse does not attack the sincerity of everyone in the “under God” movements, but he does show how exploitable many religious people were in their efforts. It inspired citizens and tempted corporate leaders and sympathetic clergy to find advantage in the fusion of their religion with the enterprise system. One telling snapshot: Dwight Eisenhower, the first president to be baptized after he was elected, knew he had to join some church or other to be part of his religious America. However, he did not want to offend anyone with his choice, so he asked the Presbyterian pastor who baptized him to be discreet and vague about his commitment. The pastor could not resist publicizing the event. So? President “Ike” screamed at his press secretary, “You go and tell that goddam minister that if he gives out one more story about my religious faith I won’t join his goddam church.”

A cooled-off Eisenhower later did join that congregation, to great acclaim among church-going Americans. His inauguration ceremonies were church-like. His successor, Richard Nixon, eager to be indiscreet, turned the White House into a virtual church on Sunday mornings and invited in the prominent preachers who welcomed the attention they received as they preached variations on the gospel of commerce. Kruse traces how this gospel took many forms. His stress throughout on “corporate America” is more than validated. Corporate interests—he names the huge companies and coalitions—subsidized, advertised, publicized and supported “under God” endeavors. The evangelist Billy Graham was the focal clerical figure, though he later gained some perspective and explicitly regretted his regular forays into overt political actions, including some during his embrace of Richard Nixon. Other Protestants, like Norman Vincent Peale and the less known but immensely powerful cleric James Fifield, with his Spiritual Mobilization campaign, along with lay celebrities like comedian Bob Hope, were in the advance guard.

For all his numerous devastating and delightful narratives and quotations, Kruse does not deliver a heavy ideological message. Note to critics: his line is not Marxist. He lets thoughtful and virtuous promoters of the “under God” movements state their own case. The towering critical theologian of the period was Reinhold Niebuhr, author of The Irony of American History. Kruse’s book is a deft elaboration on the irony of the corporate involvement in the Christian America promotion: Supporters, be they of good or ill will, converged on the idea that they were producing or re-producing a nation united “under God.” Frustrated in their attempts to change the Constitution, they had to settle for the insertion of “under God” in the Pledge of Allegiance to the flag. Yet, as the author makes clear, they were, ironically, producing a new and enduringly conflicted and polarized America.

Not long after the era of Eisenhower, the nation was to see the rise of militant religio-political fundamentalisms, the Moral Majority, the Christian anti-Communism Crusade and other causes that contended that any disagreeing fellow-citizens had to be rejected as enemies who did not belong and who were not acting “under God” but against God.

Kruse spends less time than he might have on other religious movements of the period. These were the prime years of the National Council of Churches, a liberal voice that was also often political and, in the climate of the day, polarizing. While focusing on celebrity Protestant clerics, the author pays less attention to Catholicism, which was also learning the “Christian America” theme as it was emerging into its own mainline status and, in many cases, serving and using the instruments of corporate America in new ways. We might also have welcomed more attention to Jews, who had their own religious uses of “Corporate America” but, of course, were not promoters of the “Christian Nation.” In future work Kruse might pay more attention to Christian groups left behind, most notably African-American Christians, who were still largely segregated, overlooked or looked down on by the white Protestant powers. However, the author did well to get the major “Christian Nation” cohorts to pose for this literary portrait taken during the last decades in which Protestant powers “ran the show.”

Martin E. Marty, the Fairfax M. Cone distinguished service professor emeritus at the University of Chicago, is the author of Under God, Indivisible, 1941–1960.