Is volunteering all it's cracked up to be? A review of "Doing Good...Says Who?"

Service has become more and more important to Catholic parishes, schools and universities. Many people take it for granted that service is a matter of good people helping the needy. This paternalistic understanding of charity is reinforced by stereotypes perpetuated by the mass media but also by philanthropic organizations and churches. It reinforces rather than resists the division of the world into “haves” and “have nots.” It tacitly justifies the arrogance of the former and the disempowerment of the latter.

Connie Newton and Fran Early’s Doing Good...Says Who? addresses precisely this problem. Newton organized immersion trips to Latin America, established an experiential educational program for a microcredit organization and worked as a partner with indigenous women in the highlands of Guatemala. In addition to having a successful career in human resources for a major American corporation, Early dedicated herself for more than two decades to the Greater Boston Interfaith Organization and to intercultural education and community organizing in Guatemala.

Doing Good…Says Who? is based on its authors’ decades of concrete experience with well-meaning volunteers who have tried to “do good” for people in marginalized communities in Central America. This book distills the extensive qualitative research and extensive personal experience of two highly involved, down-to-earth and practically idealistic activists. Their “roadmap” for doing good is based on observing five key guiding principles or imperatives: Respect people and value their agency, build trust through relationships, do “with” rather than “for,” ensure feedback and accountability and evaluate every step of the way. After a helpful introductory overview, the book dedicates one chapter to each of these imperatives.

The key points of each chapter are illustrated through narratives. The chapter on respecting and valuing people begins by recalling an American volunteer who, moved by encountering hungry children, wants to “just feed people.” More experienced observers, however, let her know that this move can be perceived as potentially insulting the very people whom it intends to help. An alternative, more respectful model sketches the work of local women who form teams and cook hot meals for their community every day. People are invited to contribute whatever they can—food, energy, time—and their agency is acknowledged rather than replaced by top-down charity.

The second chapter tells the story of “Lucy,” a volunteer who is given responsibility for organizing a church-sponsored clinic in the rural highlands of Guatemala. Rather than live in more comfortable surroundings, she decides to live in the village where the clinic will be located so that she can really know the people she intends to serve. Lucy’s immersion enables her to give useful advice to short-term volunteer doctors and nurses: Listen first, dress conservatively and “No giveways. No coins. No candy. Nothing. What you do here will affect the climate of our work and the expectations of the town for every team of volunteers who come after you.” Lucy gradually learns how to get the clinic built, maintained and patronized by community members who were originally leery of outsiders. She is successful because she has been informed by her friendship with local people.

Newton and Early provide an especially strong depiction of what it means to work “with” rather than “for” people. Some well-meaning Americans thought they would help some villagers by giving them a one-time gift of sewing machines and materials so that they could make and sell handbags. The villagers produced inexpensive bags that put previously successful local artisans out of business. Once they had used the materials they had been given, the new producers stopped producing and went out of business. American philanthropists thought they were “doing good,” but in fact their generosity had unforeseen destructive effects. If gifts represent doing “for” people, loans are a better mechanism for doing “with” people because they involve shared decision-making, payment schedules, personal or group investment and planning.

The second half of the book stresses the local context of decision-making and accountability. Newton and Early report on the usefulness of microfinance, the “penny capitalism” of small businesses and “trust banks” based on a group’s social capital. While it is necessary to evaluate every project at every step of the way, “doing good” is most effectively accomplished when it is driven by the particular needs, aspirations and values of local communities. When a women’s co-op wanted a loan to raise chickens and sell eggs, the nongovernmental organization they approached wanted to fund a project that involved producing and selling scented soap to tourists. The women saw the value of chickens but had no interest in travelling to the city to sell expensive soap that they never saw anyone use. The impasse was overcome when the women realized they might be able to sell soap at a tourist stop near their village. They learned how to make scented soap, and their business began to take off. This case shows how dialogue between an N.G.O. and a local co-op led to a win-win situation: a successful innovation made possible by external funding but acted upon by an energized women’s group.

This short book is packed with valuable insights for anyone engaged in service. It is a must-read for students or adults seeking to “do good” either locally or overseas. Newton and Early do not discuss religious convictions, but their guidelines are completely consistent with what one finds in the Jesuit Refugee Service’s practice of accompaniment and the ethic of “kinship” of Greg Boyle, S.J. This book would be especially valuable for service learning courses in high schools and colleges, parish and campus ministry retreats and workshops for volunteer organizations.

This article also appeared in print, under the headline “Help Them Help Themselves,” in the October 3, 2016, issue. 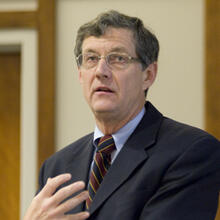 Stephen J. Pope is a professor of theological ethics at Boston College.