With God in China

A novel about goodness has become an uncommon event in contemporary America. Novels about faith are plentiful, and some readers may prefer to think of Bo Caldwell’s second effort—following The Distant Land of My Father, a bestseller—as a book about faith. A young man and woman, Mennonites, meet when they are recruited as missionaries to China. It is 1906. They will live in China for 27 years, their faith supporting them in poverty, drought, flood and famine, miseries perpetrated on the people by bandits and warlords, the cruelties of Chiang Kai-shek’s revolution, and personal loss and despair. They feel the presence of God in their lives, long to help others feel it, and it is to God they turn in suffering and also in happiness. Perhaps faith is the better term. But I prefer to think of it as a study of goodness.

Will Kiehn and his future wife, Katherine Friesen, are so well versed in their faith that only occasionally, and only in extremity, is there any temptation to turn away. Goodness, though, requires self-discipline, the daily decision to do the right thing, a backbone, hard work, and moral and sometimes physical courage. Will and Katherine have these qualities in abundance.

Their story is voiced by both of them, Will from a long time after the events and Katherine in her contemporaneous diary. Katherine’s sections are italicized; Will’s are not. As the book begins it is not always easy to keep them straight despite the typography. Will does not sound like a woman, exactly, but his voice is neutered and the reader has to remind herself that it is not Katherine who is speaking. This difficulty dissolves as they take up their work in China. Describing his activities, which are manly, Will’s voice becomes masculine.

Both are beautifully realized. Good as they are, filled with love as they are, they are also believable, this intense wife and her devoted husband and the ways in which they care for each other, take care of each other. The respect and love between this couple and Katherine’s sister and brother-in-law and their children are equally evident, and each couple is a model for the other. Indeed, mission work seems to a significant degree to be a kind of teaching by example, missionaries modeling a theology of love for a community in need. For most of their time in China, Will and Katherine’s community is Kuang P’ing Ch’eng, the City of Tranquil Light.

Details of Chinese life are fascinating, even arresting. There are the drowning pools, in which “unwanted infants, usually girls,” are murdered; opium dens, where men lie on wood pallets, lost in separate and unreal worlds; a bandit who wraps around his waist “a woman’s brassiere, which he was using as a sort of two-compartment coin purse.” The bandit with a bra/coin purse is perhaps unique, but “half-cooked pig tripe,” dog meat and “kaoliang cake stuffed with boiled scorpions minus their stingers and shells” were not. During the 1920 famine “anyone can buy a girl for three dollars.” At the same time, Caldwell acquaints us with a large cast of Chinese characters who live and breathe on the page, and Will and Katherine’s deep affection for these friends is as palpable as the characters themselves, who walk right into the reader’s room. Among them are Chung Hao and his wife, Mo Yun, who become their very dear friends and help advance the missionary work. The magistrate meets unspeakable violence with unspeakable violence yet recognizes Will and Katherine’s goodness; he and his foot-bound wife, Feng Chen Mei, come to admire the work they are doing. Lao Chang, a gateman, gives his life to save Will and Katherine. Hsiao Lao, a bandit chieftain, undergoes a complex but completely credible transformation after Will treats a knife gash on his son’s face.

There are many passages of wisdom, and again it is cogent wisdom. Will and Katherine accept that God is a mystery who cannot be fully comprehended. Even an atheist, with a little juggling, might agree with that. “I believe I could write a book about the goodness of God,” Katherine says, perhaps speaking for the author as well as herself; and Will admits, “I have come to accept that at present I have only a partial view of reality; . . . I know that my Lord is the God of wheat fields and oak trees, of mountains and valleys, and that His answers, like His works, often require time.” In late life, Will opens Katherine’s Bible to discover a handwritten note:

We often wait for God with hope. But sometimes we must wait for hope. We may feel nothing, but we do not rely on our feelings. When we don’t feel hope, we wait for it, and it always comes. (italics hers)

City of Tranquil Light was inspired by Caldwell’s maternal grandparents, but this is no hagiography, nor is it sentimentalized. The candid account of constant struggle and hardship, internal as well as external, eliminates any possibility of hagiography or sentimentalism. I say “inspired” deliberately because it is inspired, a beautifully written, often riveting, heartbreaking, heart-healing, wise and sweet-tempered novel.

This article also appeared in print, under the headline “With God in China,” in the October 4, 2010, issue. 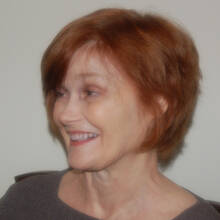 Kelly Cherry’s most recent books are Girl in a Library: On Women Writers & the Writing Life and The Retreats of Thought: Poems.