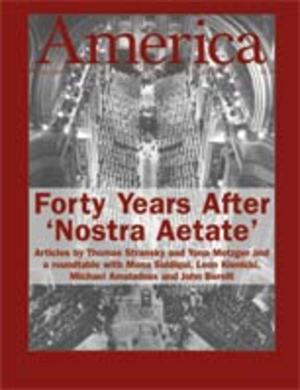 The Latin words nostra aetate mean “in our time,” a fitting opening phrase for the declaration promulgated by the Second Vatican Council in 1965 that has truly transformed our time. In Nostra Aetate the Catholic Church accepted that those of different faith communities, the “others

Of the Second Vatican Council’s 16 promulgated statements, a total of over 100,000 words, by far the shortest is the “Declaration on the Relation of the Church to Non-Christian Religions,” also known by the first words of the Latin text, Nostra Aetate. It has only 41 sentences in f

The Spirit of the Declaration
Mona SiddiquiOctober 24, 2005

The Catholic Church is unique in having a magisterium, a hierarchical structure through which declarations on teachings can come formally from “the center.” This, however, raises the question of who exactly is being addressed in those declarations that are reaching out to other faiths. I

The final volume of the History of Vatican II series (Orbis 1995-2005) presents Nostra Aetate as “the outcome of one of John XXIII’s original insights.” Ever since the idea for that declaration originated as a request in 1960 to reformulate Christian teaching, preaching and cateche

I have often wondered about the long-range value of writing, whether books or articles. It is certainly true that some novels and non-fiction works have shaped my own life, as I was recently reminded when a community of graduate students and professors traded the titles of books that were transforma

For the Catholic Church in India, Nostra Aetate came more as an encouragement than as a new beginning. In the 19th century, Hindus like Keshub Chandra Sen looked on Jesus as a guru who inspired them to reform their own religious tradition. One of them who became Christian, Brahmabandab Upadhyaya, th

A well-known Jewish parable tells the story of a young man who was hiking on a journey. It was common at that time to follow signposts, which displayed the names of various destinations and pointed in different directions. At one particular crossroads on his way, the young man found the signpost had