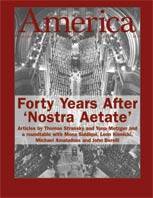 For the Catholic Church in India, Nostra Aetate came more as an encouragement than as a new beginning. In the 19th century, Hindus like Keshub Chandra Sen looked on Jesus as a guru who inspired them to reform their own religious tradition. One of them who became Christian, Brahmabandab Upadhyaya, thought that Hindu philosophy and religion would find their fulfillment in Jesus and the Gospel. Some, however, took a negative view of the institutional structures of Christianity. Nevertheless, this framework of preparation-fulfillment was later taken up by Christian missionaries in India. In 1913, J. N. Farquahar wrote a book pointing to Christianity called The Crown of Hinduism. Pierre Johanns, a Belgian Jesuit missionary, wrote a series of essays in 1932-33 under the general title To Christ Through the Vedanta, showing how various Vedantic philosophical traditions could find fulfillment in the scholastic theology of Thomas Aquinas. Abbé Monchanin and Dom Henri Le Saux from France had great admiration for the mystic traditions of Hinduism. In 1950 they founded a Christian ashram, hoping that these traditions would find their fulfillment in the mysticism suggested by the mystery of the Trinity. only confirmed this openness.

The ashram movement has flourished. There are now more than 60 Catholic ashrams in India, where small groups of people are trying to live an inculturated way of life and worship, practicing Indian Christian spirituality and dialoguing with the Hindus in the area. The Catholic Bishops’ Conference of India has a special commission for interreligious dialogue, which has been promoting dialogue meetings with members of other religions across the country. There are also a few dialogue centers where such meetings take place regularly.

Theologians have been developing a new theology of religions and of religious pluralism. A national seminar in 1974 suggested that we can look upon the scriptures of other religions as inspired analogically and even use them in the liturgy. Though official permission for this was denied, people use them in private prayer and meditation. A seminar in 1988 on sharing worship encouraged such sharing as an expression of sharing faith.

The Hindus, while welcoming the new openness of Christians, have looked at it with some suspicion, since efforts to convert others to Christianity have also continued. The central authority in the church has also looked with suspicion at some theologians who are thought to be promoting dialogue to the detriment of “proclamation.” In recent years Hindu fundamentalism has created a new sense of caution among educated Hindus. But the traditional spirit of religious tolerance is still strong and widespread in the country, and a vast majority of the people have democratically expressed their desire for a secular political order in which all religions are treated with respect and their identities protected. At the same time, there have been occasional incidents of interreligious violence. Some groups therefore think that dialogue today must take the form of conflict resolution and reconciliation based on justice and tolerance. Religious groups have also been coming together in the defense of human rights. Overall, there is a desire to move from dialogue toward harmony as the goal.

Michael Amaladoss, S.J., is director of the Institute of Dialogue With Culture and Religions in Chennai, India.