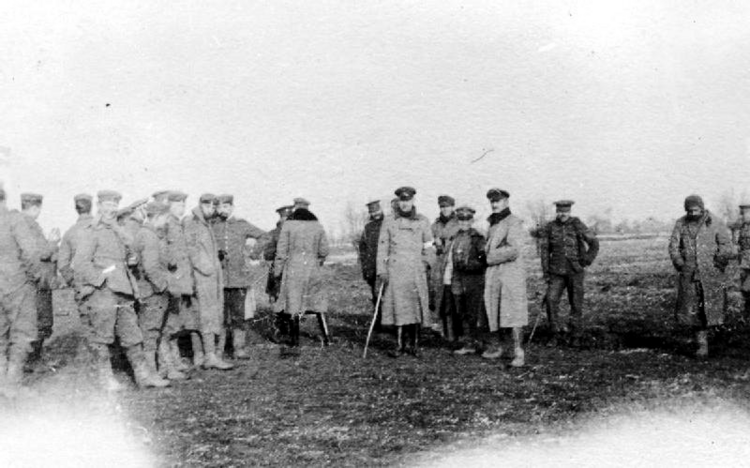 The legend of the “Christmas Truce” has come down to us in various forms over the past century. The numerous accounts of the ceasefire concur as to one truth: For several hours on Christmas Day 1914, a large number of Allied and German soldiers laid down their guns and emerged from their trenches to share gifts of tobacco, food, liquor and more, and finished off the gathering with an improvised game of what Americans call soccer. (The Germans say they won, 3-2.)

By Christmas 1914, a war that many had gone off to fight just a few months before with great enthusiasm—the “war to end all wars”—had become a brutal, miserable experience. The advent of the machine gun and modern artillery had ruined any romantic visions of gallantry or a heroic death; within a few years, those weapons would be joined by poison gas. “They wrote in the old days that it is sweet and fitting to die for one’s country,” according to Ernest Hemingway, who served in Italy later in the war and was wounded by Austrian artillery. “But in modern war, there is nothing sweet nor fitting in your dying. You will die like a dog for no good reason.”

Time magazine estimated that more than 100,000 soldiers participated in the first Christmas Truce and several others in the following days. The ceasefire began with German soldiers singing “Stille Nacht” from their trenches. British soldiers responded with Christmas songs of their own, and for both sides “Adeste Fideles” was a venerable chestnut they sang together. Suddenly men were holding up welcome signs, shouting, “Don’t shoot!” and cautiously making their way into No Man’s Land. Gifts were exchanged; prisoners swapped; letters allowed to pass through enemy lines; proper burials were allowed for each side’s dead; most of all, humanity recognized humanity for a time.

It did not end the war and it did not solve any disputes. But the story endures because it speaks both to the generosity of the human spirit in the worst of times and to the hope that accompanies the yearly celebration of the birth of Christ.

In the darkest season of the year in northern climes, we hold on to this luminous sense at the same time we cannot help but sum up the events of another year coming to a close.

We celebrate Advent every year as a season of waiting and expectation, an anticipation of new life. In the darkest season of the year in northern climes, we hold on to this luminous sense at the same time we cannot help but sum up the events of another year coming to a close. The juxtaposition between the anticipatory joy of the former and the sometimes grim calculus of the latter can be jarring.

Three decades after the end of the Cold War seemed to augur an era of global democracy, dictators and oligarchs around the world seem emboldened anew to commit violence and plunder the earth of resources. Soaring commodity prices and supply chain disruptions have raised another ominous specter: widespread food shortages and even mass starvation. The United Nations predicts that 50 million people worldwide face emergency-level food needs, with over 880,000 in Afghanistan, Ethiopia, Somalia, South Sudan and Yemen on the brink of starvation. The droughts and altered weather patterns brought by climate change place hundreds of millions more in danger of shortages of food, water and shelter. Regional armed conflicts—many fought with American-made weapons—only exacerbate these crises.

Democracy is imperiled at home and abroad—for every nation that manages to bridge a change in regimes without violence, there is another (the United States?) for whom that violence seems all but inevitable. A growing number of Americans say that free elections are imperiled, and many say they simply do not accept election results.

For the Christian, hope does not tell us that things will get better, but that in the end, with God, all shall be well.

We perhaps thought that partisan rancor in the United States had reached its modern apogee with the Jan. 6, 2021, insurrection at the U.S. Capitol. Two years later, we face the cruel prospect that the divisions exposed then are not being healed but exacerbated. The goal long sought by many Catholics—the elimination of federal protection of abortion rights—has not led to anything resembling a civil debate, much less a consensus. In fact, the Supreme Court decision has led to some state-level abortion laws that are even more liberal than under Roe.

Suicides and drug abuse are up across the board, including overdoses and hospitalizations; addictions to other substances and vices are on the rise as well; and more than two years of relative isolation for many has resulted in a marked decrease in public civility, as if we somehow forgot how to get along at all.

The optimists among us might say that all these are but birth pangs, the inevitable pain that accompanies the appearance of new life. But in the Christian tradition, optimism is no virtue. To assume things will get better in the end may be helpful for maintaining a positive outlook, but it offers little else. For the Christian, hope is the virtue that lives where optimism claims to abide: trust in the assurance of God’s fidelity and the belief that we can participate in God’s faithful action in the world. For the Christian, hope does not tell us that things will get better, but that in the end, with God, all shall be well.

That hope began in Bethlehem with a cold and hungry family of migrants living in a war-torn and occupied land—people with little to be optimistic about, but to whom God gave many signs to ponder. Few signs suggested reasons to be hopeful for that family, any more than they did for the soldiers in the trenches in 1914—and perhaps not any more than they might for those who suffer today. But like the Holy Family, we will face our challenges all the better when we rely less on progress or bemoan its opposite and instead turn our minds to the sacred truth that God is with us.

We prepare ourselves in these holy weeks of Advent to commemorate once again the moment when hope triumphed over all. To use the words of the Book of Wisdom: “When peaceful silence lay over all, and night had run half of her swift course, your all powerful word, O Lord, leaped down from heaven from the royal throne.”

More: US Politics / US Church / Advent