Catholic Relief Services C.E.O. on the alarming signs of our times: hunger, drought and war 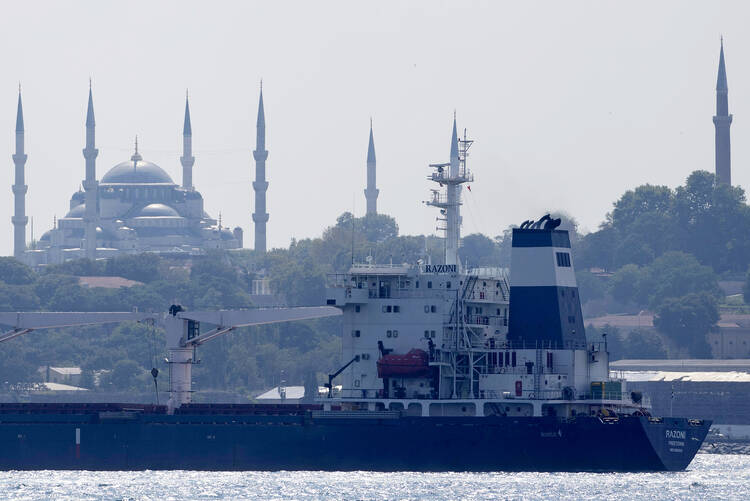 The first cargo ship to leave Ukraine since the Russian invasion, the Razoni crosses the Bosphorus Strait in Istanbul, on Aug. 3. (AP Photo/Khalil Hamra)

Ukraine, Ghana, Ethiopia make for an unusual travel triptych united by the alarming signs of our times: hunger, drought and conflict. Sean Callahan, president and C.E.O. of Baltimore-based Catholic Relief Services, returned last month from tours and consultations with C.R.S. partners in each of these nations.

Conflict has been a source of suffering in all three countries—Ukraine in its existential struggle with the Russian Federation; Ethiopia, grappling with civil clashes in Tigray and other provinces; and Ghana, enduring extremist violence emerging from Africa’s Sahel region—but it is the global response to an accumulating threat of hunger that is at the forefront of his concerns after his country visits.

So far the global community has avoided the worst-case scenario that horrified the world into action during the Ethiopian famine in 1984, but conditions remain deeply worrying.

It is likely that 2022 will remain a memorable year for people in the relief and development field and not for any good reasons. Mr. Callahan called it a global “perfect storm” of adverse conditions—drought, Covid lockdowns, supply chain disruptions, inflation and now the war in Ukraine. The United Nations’ World Ford Program reports that 345 million people face acute food insecurity in 82 countries, while 50 million in 45 countries face “emergency”-level need; over 882,000 people in Afghanistan, Somalia, Yemen, South Sudan and Ethiopia are enduring a hunger catastrophe that puts them on the edge of starvation.

According to a report from the U.N. Food and Agriculture Organization, the rise in food insecurity brought on by drought in Somalia has forced “more than 900,000 people to flee their homes in search of humanitarian assistance since January last year.” As conditions worsen, “people living in eight areas of the country could be experiencing famine by September,” the organization said.

Pope Francis called on the international community to help the people of Somalia during his Sunday Angelus address on Aug. 14.

“The populations of this region, who already live in very precarious conditions, now find themselves in mortal danger due to drought,” the pope said.

“I hope that international solidarity can respond effectively to this emergency,” he said. “Unfortunately, war diverts attention and resources, but these are the objectives that demand the utmost commitment: the fight against hunger; health; and education.”

One positive sign this month toward addressing the looming crisis, Mr. Callahan noted, was the restoration of grain exports out of beleaguered ports in Ukraine. After lengthy negotiations hosted by Turkey and the U.N., shipments of Ukrainian grain crucial to staving off hunger around the world were restored.

So far a handful of ships have made their way cautiously out of the Black Sea, surviving threats from Russian attack and Ukrainian mines.

“Any normalization of the situation in Ukraine and [improving] options of getting things out of the Odesa port are very helpful,” Mr. Callahan said. Successful shipments should “stimulate increased interest in trade” out of Ukraine.

Ukrainian grain exports have been halted since Russia began its faltering military adventure against Ukraine in February, accelerating a historic crisis of global food insecurity.

Ukrainian grain exports have been halted since Russia began its faltering military adventure against Ukraine in February, accelerating what has become a historic crisis of global food insecurity. A U.N.-chartered cargo vessel, The Brave Commander, loaded with 23,000 metric tons of Ukrainian grain destined for Ethiopia, departed from the Black Sea port of Yuzhne, east of Odesa on Aug. 16.

It was the first shipment of its kind in a program to assist countries facing famine since Russia’s invasion shuttered Ukraine’s Black Sea ports. The Brave Commander sails for Djibouti, where the grain will be unloaded and transferred to Ethiopia under a World Food Program initiative.

The restored trade out of this breadbasket region means more than getting food to the hungry. “Most of the fertilizer [used in West Africa] comes from either Russia or Ukraine,” Mr. Callahan said.

Getting those inputs back out to global markets is only part of the solution. According to a World Bank analysis, commodity prices have accelerated at a rate not seen since the 1970s. World Bank forecasts suggest those elevated costs will persist through 2024.

“In a place like Ghana, that’s not having the climate chaos [and drought] that they’re having in the Horn of Africa,” he said, “as I went out to the field talking to [farmers], they’re more worried about 2023 than they are about 2022.” Skyrocketing prices of agricultural inputs—seed, fertilizer and fuel—means West African farmers may be forced to plant less in the coming growing season, Mr. Callahan said. That bodes poorly for chances of emerging from a global hunger crisis first set in motion by the Covid-19 pandemic in 2020.

So far the global community has avoided the worst-case scenario that horrified the world into action during the Ethiopian famine in 1984, Mr. Callahan said, but conditions remain deeply worrying. The C.R.S.-endorsed Global Food Security Reauthorization Act is moving through Congress. If passed, it will extend the authorization of the U.S. Agency for International Development’s Feed the Future program through 2028.

But some hunger-relief advocates say that Congress must double the $1 billion in annual spending authorized by the bill to respond properly to the current crisis. Mr. Callahan, allowing that the United States could always “give more to development and humanitarian assistance overseas,” believes that the Biden administration has been attentive to the escalating crisis. He would like to see European powers follow the U.S. lead by beefing up the E.U. response, concerned that E.U. states have been diverting resources away from global hunger to fund programs for Ukrainian refugees.

It is indeed “scary to think of what could happen” next in Ukraine, Mr. Callahan said, but he found in discussion with staff from local partners Caritas Spes and Carita Ukraine that the Ukrainian people retain some hope that “the situation is going to turn around,… that [they’re] going to be able to get back to normal.”

What normal will look like in the coming months is anyone’s guess. Too much relies on the decisions made in Moscow, but C.R.S. partners in Ukraine are trying to plan for the coming winter.

Conflict and drought have badly impoverished communities in Ethiopia.

Reconstruction in urban areas is a massive and perhaps futile task for now, he said. But some communities in rural areas where Russian forces have withdrawn will need to be targeted for quick reconstruction and repair that will allow people to shelter this winter. Children will have to return to school, he said, and the trauma experienced by civilians who have survived the conflict will have to be addressed even as the war continues.

C.R.S., he said, is also planning how best to continue to support the displaced community in the region. Moldova, Poland and other bordering nations have so far remained welcoming to the millions of Ukrainians who have fled the conflict. “Ten percent of Poland is now Ukrainian refugees,” he said. How can that kind of hospitality be maintained, he wonders.

In his visit to Ethiopia, he saw some evidence that the worst of the humanitarian crisis in Tigray may be subsiding. Fuel is finally reaching the conflict area, and that is allowing truckloads of C.R.S. supplies to reach communities that had been cut off by fighting between Tigrayan and government forces. He has seen positive development in resolving the conflict between the Ethiopian central government and independent forces in Tigray but says the conflict “continues to simmer.”

As he has seen throughout the region, conflict and drought have badly impoverished communities in Ethiopia. Many families “bank” their wealth through livestock; many have lost that wealth in goats, cattle and camels to drought, banditry or civil conflict. He hopes that expanding efforts in microfinance lending programs in the region when conditions stabilize will eventually restore these lost family assets.

That is an effort that looks to the future in a year that a lot of people will be eager to put behind them. But getting food to hungry people this season, Mr. Callahan hopes, will begin a virtuous cycle that will mean better harvests in vulnerable states and a better handle on global hunger soon.