Analysis: Pope Francis apologized to the Indigenous Peoples in Canada. Was it enough? 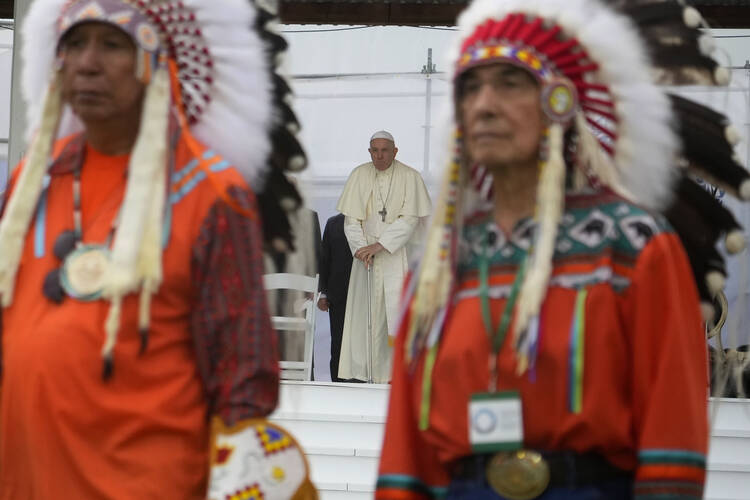 Pope Francis arrives for a meeting with indigenous communities, including First Nations, Metis and Inuit, at Our Lady of Seven Sorrows Catholic Church in Maskwacis, near Edmonton, Canada, Monday, July 25, 2022. (AP Photo/Gregorio Borgia)

The excited and continuous beating of drums filled the circular, tented space at Ermineskin Cree Nation territory in Maskwacis, Alberta. Pope Francis waited—with a sense of gravity and solemnity clearly visible on his face—as he sat on stage for proceedings to begin at Muskwa Park, the site of one of Canada’s former Catholic Church-run residential schools, and a place that today is also a sacred meeting ground for the Cree Nation. Here, the pope was expected to make a long-awaited and promised apology for the Catholic Church’s involvement in residential schools and the abuses perpetrated there for more than a century by priests and consecrated religious women and men.

“I am here because the first step of my penitential pilgrimage among you is that of again asking forgiveness, of telling you once more that I am deeply sorry,” the pope said, as he addressed the assembly minutes later, flanked by the four Indigenous leaders sitting beside him on stage. He had already made a heartfelt public apology in April at the Vatican. Now, the time had come for him to apologize, as he had promised then, on Indigenous land, at the site where the abuse of hundreds of children had taken place.

“I am sorry,” he said again as he began the first speech of his six-day pilgrimage of penance through many Indigenous communities in Canada. “I ask forgiveness, in particular, for the ways in which many members of the church and of religious communities cooperated, not least through their indifference, in projects of cultural destruction and forced assimilation promoted by the governments of that time, which culminated in the system of residential schools.”

A silence befell the space throughout the pope’s half-hour-long speech. Some captured the historic moment with their cell phone, recording every word of the pope’s apology; others closed their eyes, apparently listening intently. One woman in Indigenous dress leaned her head on a woman to her side while tears found rest on her cheek. The only distinctly audible sound that seemed to fill the meeting ground was the applause that erupted in the assembly each time the pope said, “I’m sorry.”

But now that the apology has been made, was it enough? In anticipation of the pope’s apology in Canada, America spoke to a number of key players in the reconciliation and healing process that has taken place since the closure of the last residential school in the late 1990s, bringing to an end centuries of sexual, physical and emotional abuse and the erasure of Indigenous cultures in a program of assimilation into Western culture.

Phil Fontaine is an Ojibwe of the Sagkeeng First Nation, a survivor of two residential schools run by the Missionary Oblates of Mary Immaculate and was the national chief of the Assembly of First Nations for three terms. He said the pope’s earlier apology at the Vatican this past April “was critically important because with the apology, he also committed to coming to Canada.”

The commitment to apologize on some of the Indigenous soils where such heinous abuses were committed answers an overdue call, Chief Fontaine said. “It was an apology that we wanted, according to one of the calls to action in the T.R.C. [Truth and Reconciliation] report.”

“For this reason,” Chief Fontaine said, “I don’t want to minimize the apology in Rome.”

In 1990, then the grand chief of the assembly of Manitoba Chiefs, Chief Fontaine was among the first to publicly break the silence around the abuses he had experienced. Today, his perspective of the entirety of his school experience has altered somewhat. “I sometimes—maybe too often—forget to say clearly that the people that ran these schools were not terrible people; they were not monsters. They were not deliberately causing harm,” he said.

In 1990, then the grand chief of the assembly of Manitoba Chiefs, Chief Fontaine was among the first to publicly break the silence around the abuses he had experienced.

Chief Fontaine’s admission of some of the good done at the schools, he said, is “not to say that I’m being an apologist here for the Catholic Church.” Rather, while he recognizes that the church “caused a lot of damage,” he said, “the church itself, at residential schools, were also victims because they were caught in a situation where they were administering and implementing bad public policy. We’ve had a tendency to tar everyone with the same brush, but that’s not fair.”

Returning to the expectation that Pope Francis would apologize in Canada, Chief Fontaine remarked that “some people were really quite disappointed with the words they heard at the Vatican; because he was speaking not on behalf of the institution, he was focused on individuals that have caused harm,” he said. In Canada, Chief Fontaine hoped the pope “would expand on those words when he is here to visit us in our communities and…would talk about the residential school experience and what he had learned at these private encounters in Rome.”

And it appears Chief Fontaine’s hopes were realized, at least in part. As Pope Francis addressed the crowd at Bear Park on July 25, 2022, he spoke about “the deep sense of pain and remorse that I have felt in these past months. I think back on the tragic situations that so many of you, your families and your communities have known; of what you shared with me about the suffering you endured in the residential schools,” he said, acknowledging the toll that the stories of survivors had taken on him personally.

Priscilla Solomon is an Ojibwe Anishinaabekwe and a consecrated religious woman who works in the Faith and Justice Office of the Sisters of St. Joseph of Sault Ste. Marie, where her ministry has focused on reconciliation between Indigenous People and people of settler origins. She also had broader hopes for the pope’s apology.

“They want to hear the Holy Father say it was the Catholic Church that was ultimately responsible for what descended on the peoples of our country, the first peoples.”

Ken Thorson, O.M.I., is the provincial of the Lacombe province of the Oblates, the religious order that ran most of the Catholic residential schools in Canada, including the schools where Chief Fontaine suffered abuse. A year after Chief Fontaine publicly denounced his abuse, the Oblates issued the first formal apology from a Catholic institution. “Thirty years later we’re still living into this apology,” Father Thorson said of the Oblates’ initial apology.

“I’m somebody who didn’t work at the schools—I didn’t go to the schools,” he said, admitting some discomfort speaking about what a papal apology should achieve. “I think it will be an encouragement to me, personally, to continue what is often difficult work; to continue that work because it’s the work that we’re called to as a church. And it’s a work that we’re called to as Oblates because of our legacy, because of our history with residential schools,” he said. “We need to do the work of healing and reconciliation of the brokenness that we had a significant role in creating.”

Archbishop Richard Smith of Edmonton, who is responsible for the church in the area where the apology was issued by the pope, told America before the visit that he hopes the pope’s presence in Canada “will be a beacon of hope.”

“The reason I say that,” explained the archbishop, “is that we’re talking about healing and reconciliation in a very particular context. But that exists as a need everywhere, everywhere in our country and at all kinds of different levels in our families, within our own hearts, in society, internationally. And I think people everywhere are looking for models of what reconciliation actually can look like. They’re looking to see that it’s possible.”

“That’s what our people are looking for. They want to hear the Holy Father say it was the Catholic Church that was ultimately responsible for what descended on the peoples of our country, the first peoples,” he said. “We take full responsibility for those awful experiences, these tragic moments, this dark part of your history. And we are sorry for the church’s complicity in this period of our history together.”

“With those words, I think we will begin a process of turning the corner,” Chief Fontaine said. “And begin the work of rebuilding the fractured relationship between the Catholic Church and our people.”

Sister Solomon said that Indigenous people have heard the apologies made by Pope Francis at the Vatican, by the Canadian bishops as a body in September 2021, and by various Catholic bishops and organizations over the years. “But they’re not enough,” she said. “They’re not an endpoint. They’re only one step on the way and they call for a response from us as Catholics to enflesh those apologies.

It is the beginning. It is not the end of the story. It is the beginning. There will be a long, difficult journey ahead of us. And as a number of people have said: ‘We will walk together.’ I’ve heard church people say to us: ‘We will walk this journey together.’ Well, it begins by making sure that people understand what the church means by that—they will have to tell us what they’re prepared to do, in concrete measures, in walking this journey together.

[Listen next: Roundtable—Indigenous survivors of abuse on truth, reconciliation and the need for a papal apology]