Will Pope Francis resign? Here are some reasons to believe it—and some to be skeptical 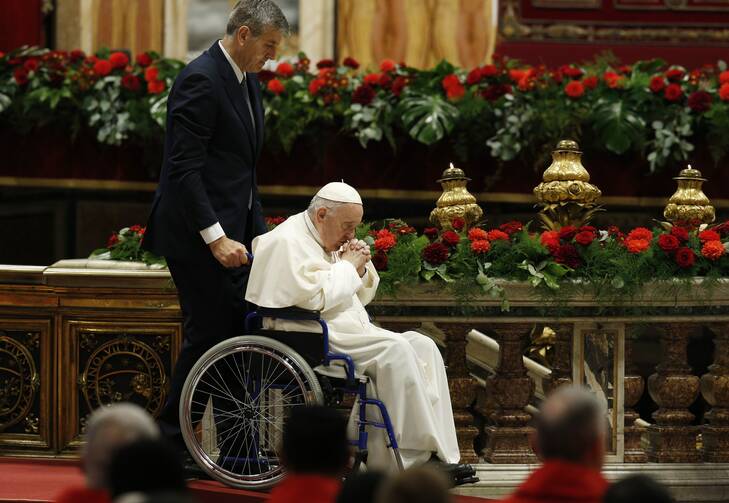 Pope Francis is pushed in a wheelchair by his aide, Sandro Mariotti, after giving the homily during Mass for the feast of Pentecost in St. Peter's Basilica at the Vatican June 5, 2022. (CNS photo/Paul Haring)

Pope Francis’ health has been a subject of speculation since even before he was elected, when a false rumor that he was missing a lung circulated during the conclave in an effort to thwart his candidacy. (The pope had lung tissue removed when he was young because of an infection.) Rumors of resignation flew again last summer, when he was hospitalized for a scheduled surgery on his colon, and again this year as he has been in visible pain when walking and has begun using a wheelchair.

But several recent events scheduled for the end of August have added fuel to the fire: First, the pope announced he would create new cardinals at a consistory on Aug. 27, followed immediately by an unusual meeting of the world’s cardinals, who ordinarily only come together when it’s time to elect a new pontiff. Although the meeting, on paper, is focused on reviewing the pope’s recent reform of the Vatican’s central bureaucracy—one of the main tasks for which he was elected—it has also been widely interpreted as a chance for the cardinals to get to know one another.

Pope Francis’ health has been a subject of speculation since even before he was elected, when a false rumor that he was missing a lung circulated during the conclave in an effort to thwart his candidacy.

With Pope Francis appointing cardinals from countries that ordinarily have not been represented in the College of Cardinals, many of the prelates do not know each other. This was the case, too, in the 2005 conclave that elected Pope Benedict, because the cardinals had not been together in conclave since 1978. As a result, the cardinals elected Joseph Ratzinger, someone who was well-known, held a high-ranking position in the Roman Curia and who celebrated St. John Paul II’s funeral. America’s Vatican correspondent, Gerard O’Connell, said that some cardinals had asked Pope Francis to arrange a meeting where the College of Cardinals could get to know one another to build some familiarity ahead of the next conclave.

All this talk of conclave had ramped up speculation that the pope could be thinking of resigning soon, but an announcement from the Vatican this weekend sent the flames of speculation soaring: While all of the cardinals are in Rome, Pope Francis will make a day trip to the cathedral in L’Aquila where Pope Celestine V is interred.

Celestine V was the first pope in history to resign by choice. (Dante gave him a permanent spot in the Inferno because of it.) An unwilling pontiff from the beginning, Celestine was a monk who was chosen as pope as a sort of olive branch in a church torn between competing factions. He resigned after five months as pope.

A papal visit to Celestine’s tomb has long been a surefire way to provoke speculation that the pope may retire.

A papal visit to Celestine’s tomb has long been a surefire way to provoke speculation that the pope may retire: Decades before Benedict XVI’s 2009 visit, when he laid down his pallium on Celestine’s tomb, Paul VI sparked rumors of his own resignation by visiting the site of Celestine's death, Mr. O’Connell mentioned in a new episode of the “Inside the Vatican” podcast.

These three events—the August consistory, the visit to Aquila and the cardinals’ get-to-know-you meeting—combined with images of the pope wincing in pain as he walked to his chair for Pentecost Mass last Sunday, have led some to believe the pope could be planning an August resignation. He has completed the reform of the Roman Curia, the logic goes, so maybe it is time to hand the reins to someone else.

But there are also reasons to be skeptical of this narrative: One simple explanation for the unusual timing of the consistory, which was expected to take place in November, could simply be that traveling to Rome during the off-season for tourism is cheaper. Likewise, the pope could want the cardinals to save some money and limit their time away from their dioceses by combining the consistory and the meeting into one trip. He is, after all, a frugal man who expects the same of his advisors: He cut the cardinals’ salaries by 10 percent during the pandemic so he could continue paying the Vatican’s lay employees.

The perhaps most convincing reason to believe the pope will not resign yet is the simple fact that Pope Emeritus Benedict XVI is still alive.

Then there is his travel schedule: Francis has a trip to Kazakhstan planned for September and a few rumored trips for 2023, although popes can pass trips on to their successors. Both Benedict XVI’s and Francis’ first international papal visits were to World Youth Day events that their predecessors had committed to.

The last, and perhaps most convincing, reason to believe the pope will not resign yet is the simple fact that Pope Emeritus Benedict XVI is still alive. Pope Francis will likely want to make some changes to the role of retired pope—like adopting the title “Emeritus Bishop of Rome” rather than “Pope Emeritus,” and not wearing white—in order to dispel the idea that there are two popes. It is difficult to imagine Francis taking such steps while Benedict remains emeritus.

It is certainly possible that the pope is laying the groundwork for a future resignation. After all, Pope Francis knows well the power of gestures and images, and surely he knows how the image of a wheelchair-bound pope visiting the tomb of Celestine V will be interpreted. But I have serious doubts he would resign in August, unless his health were to take a sharp turn for the worse. As of now, the Vatican is able to make adaptations for a pope in a wheelchair; I think it is only if the pope’s mental abilities were imperiled that he might choose to step down.

It is also possible, on the other hand, that the pope simply has his eye on the horizon: He knows he will not live forever, and he is working hard to ensure his legacy through the Curia reform, the global synodal process (set to end in 2023) and his appointments to the College of Cardinals. He knows the problems with the conclaves he participated in: Europeans were overrepresented and few cardinals knew one another. Now, he is working to make changes so that the next conclave will be one that more accurately reflects the reality of the Catholic Church.

Read more from America:
-What happens if a pope resigns?
-A Historic Departure: Reflections on Benedict XVI’s surprise decision to resign

Correction 6/10/2022: An earlier version of this article conflated some elements of Celestine V's story with that of Gregory XII, the last pope to voluntarily resign before Benedict XVI. The article has been corrected for accuracy.