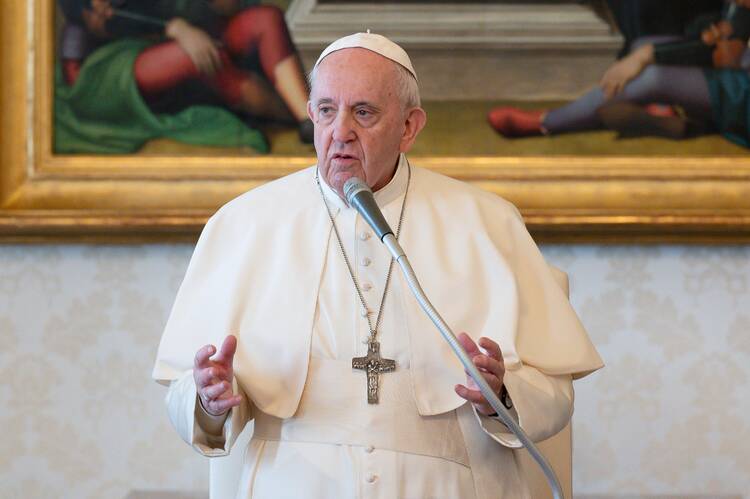 Pope Francis at a general audience in the library of the Apostolic Palace at the Vatican on March 24, 2021. (CNS photo/Vatican Media)

In an unprecedented move, Pope Francis has reduced the salaries of cardinals, senior officials, clerics and men and women religious working in all the institutions of the Holy See—of which the Roman Curia is a central part—as well as in the Governorate of the Vatican City State. In a “motu proprio” apostolic letter announcing the cuts, Pope Francis cited growing budget deficits and the significant economic impact of the Covid-19 crisis among reasons for the move.

The decree also applies to all persons working in the Rome Vicariate, in the chapters of the papal basilicas at St. John Lateran and St. Mary Major, and at the institutes responsible for the upkeep and administration of St. Peter’s Basilica and St. Paul’s Outside the Walls.

Pope Francis wrote that the reductions in salaries are necessary to ensure “an economically sustainable future” and to “safeguard the current jobs.”

A total of about 6,000 persons are employed across these Vatican entities, but not all of them will be affected by the pay cuts. The reductions will range from a 10 percent cut in the salaries of cardinals and an 8 percent reduction for senior officials to a 3 percent reduction for priests and religious personnel. Lay persons at higher levels will also face some cuts, but the salaries of lower-level lay staff will not be reduced. In addition, automatic raises based on length of service have been suspended. The reductions come into effect on April 1.

A cardinal (or prefect of a Vatican dicastery) working in Rome receives a salary of around $6,000 per month plus a free apartment. The secretary (the # 2 official) in a dicastery receives around $5,000 per month, while the starting base salary for a nuncio (a Vatican ambassador) is close to $4,000 a month. Pension and health care costs are paid out of those salaries as well. With the exception of cardinals, all senior officials and nuncios pay rent for Vatican-subsidized housing. Vatican employees also have access to the city-state’s duty-free supermarket.

The Vatican salary reductions range from a 10 percent cut for cardinals to a 3 percent reduction for priests and religious personnel.

The decree noted that exceptions are allowable if an employee faces economic difficulties related to health or because he or she is caring for family members.

In his letter, Pope Francis wrote that the reductions in salaries are necessary to ensure “an economically sustainable future” and to “safeguard the current jobs.” The Holy See’s chronic budget deficit has also been aggravated by the Covid-19 pandemic, which has affected “all the sources of income” of the Holy See and Vatican City State. As America reported recently, the Holy See is projected to suffer a 30 percent drop in income in 2021 due to decreases in income from local churches, from properties and investments, and from perennial cash cows like the Vatican Museums—closed for much of this past year.

While Holy See and Vatican City State properties are “adequately capitalized,” Pope Francis stressed the need to balance regular incomes and expenditures and to guarantee the security of employee pension funds.

Pope Francis said he reached this decision after consulting the Secretariat for the Economy, headed by a Spanish Jesuit, Juan Antonio Guerrero. Father Guerrero also oversaw the crafting of the 2021 budget for the Holy See and Vatican City State, which foresees a deficit of $59 million.

Correction: A previous version of this article stated incorrectly that the pay reductions would affect all 6,000 Vatican employees.