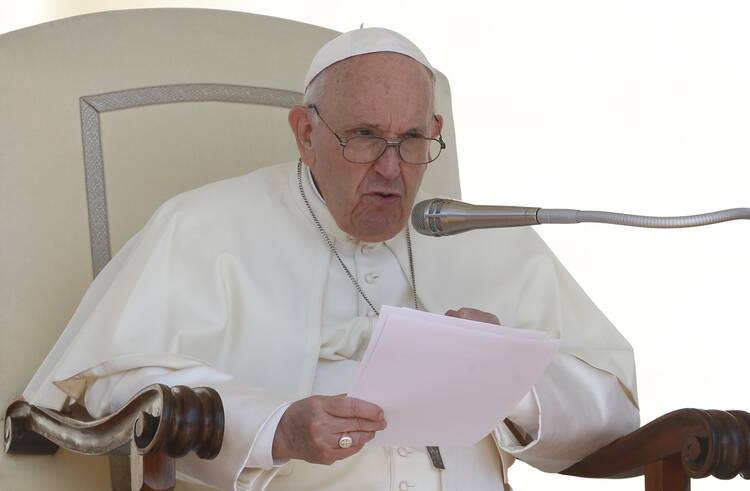 Pope Francis speaks during his general audience in St. Peter's Square at the Vatican May 18, 2022. (CNS photo/Paul Haring)

Pope Francis today urged Catholics worldwide to join in prayer for the church in China so that its 12 million Catholics may be able to live “in freedom and tranquility” and “in effective communion with the universal church.”

“I am attentively and actively following the often complex life and situations of the faithful and pastors [in China], and I pray every day for them,” he said in a message for the feast of Mary Help of Christians that is celebrated on May 24.

Referring to the feast, he said, “this happy occasion offers me the opportunity to assure them once again of my spiritual closeness.”

The feast is particularly dear to Chinese Catholics and is popularly known as that of Our Lady of Sheshan, who is commonly called “the protector of China.” A famous statue of the Virgin Mary stands on top of the church at the shrine of Sheshan, on the outskirts of Shanghai. It shows her holding the child Jesus high above her head to show him to the world. Since 1873, when it was first placed there, the statue has attracted millions of pilgrims from all over China, especially during the month of May.

In an effort to unite the universal church more closely with the church in China, Benedict XVI decreed in his 2007 Letter to Catholics in China that May 24 be celebrated worldwide as “a day of prayer for the Church in China.” In recent years, however, the Chinese authorities have actively sought to dissuade Catholics in the mainland from participating in pilgrimages to Sheshan and from celebrating this feast publicly in other places.

Addressing 25,000 Romans and pilgrims gathered in St. Peter’s Square at midday on Sunday, May 22, Pope Francis issued his call to Christians worldwide to pray for Catholics in China.

“I invite all of you to unite yourselves in this prayer so that the Church in China, in freedom and tranquility, might live in effective communion with the universal Church, and might exercise its mission of proclaiming the Gospel to everyone, and thus offer a positive contribution to the spiritual and material progress of society as well.”

His words referring to “the often-complex life and situations of the faithful and pastors” and his call for prayers that Catholics in China may be able to live in “freedom and tranquility” and “in effective communion with the universal church” were carefully chosen, as a number of factors make the situation of the Church in China difficult today. Bishops and priests in China cannot travel freely to Rome or to other countries to meet their fellow Catholic bishops or the pope, or to participate in international meetings. Chinese Catholics face government-imposed restrictions on the practice of the faith, and bishops like Bishop Joseph Zhang Weizhu of the Xinxiang diocese have been harassed and at times detained by Chinese authorities. The repression has recently extended to Hong Kong with the arrest earlier this month of Cardinal Joseph Zen, who was detained for several hours but later released on bail.

This crackdown on religion contradicted earlier hopes and expectations, in the Vatican and in the church in China, for positive developments in relations between the communist authorities and the church in China as Pope Francis worked to reach out to the authorities in Beijing after his election in 2013. However, Catholics in China in recent years have experienced greater difficulties in the practice of their faith as a result of the crackdown on religion being carried out under the regime of President Xi Jin-ping. All this, notwithstanding the provisional agreement on the appointment of bishops that the Vatican signed with Beijing in Sept. 2018, which extends until next October.

The crackdown includes the strict enforcement of regulations in several parts of the mainland that prohibit anyone under the age of 18 from attending church or other religious services, receiving religious education or catechesis, or participating in any kind of religious event. The regulations impose heavy penalties on anyone who defies them. This means that parents who take their children to church or to a religious education class or to any other religious-linked event will be penalized, as would young people who engage in any kind of religious event.

This particular prohibition strikes at the future of the Catholic and other Christian churches, as well as that of other religions. It is an issue of utmost concern for Catholics in mainland China who see it as an attempt by the communist authorities to prevent young people from being educated or growing up in the faith. It is also a matter of serious concern for the Vatican, which has raised the issue with the Chinese authorities.

Pope Francis’ call today for prayer for the church in China and his message to China’s Catholics on the feast of Our Lady of Sheshan can be read in this wider context.