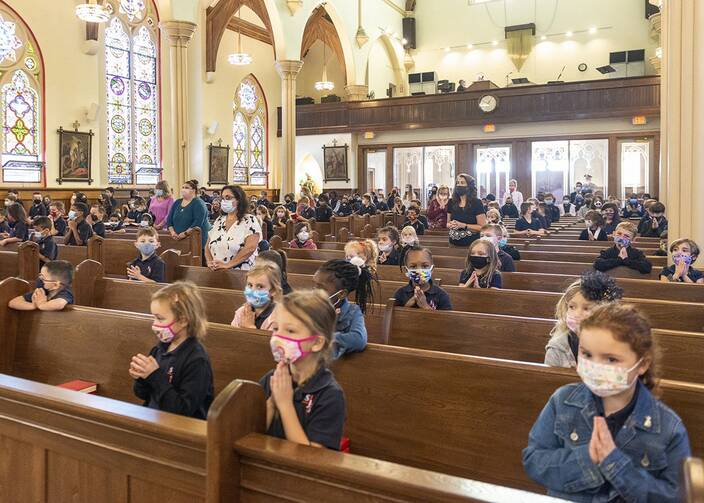 This past fall, my oldest child started kindergarten at a Catholic school. I had little idea what to expect: Would my son enjoy school? Would he get along with his teachers? Would the pandemic entirely derail his experience? But as it turns out, I need not have worried. He loves learning. He admires his teachers. He and his classmates happily wear their masks and get on with their day.

My own experience in Catholic schools was a largely positive one that truly shaped me and my faith. My son’s reports about his participation in the school’s morning prayer or about the prayer table in his classroom indicate that he is beginning to feel this too. But this experience is becoming less common. Between 2020 and 2021, Catholic elementary school enrollment decreased by 8.1 percent. Overall enrollment in Catholic schools is at its lowest point in 50 years.

For supporters of Catholic education, these numbers are hard to face, but there are also many reasons to hope that Catholic schools still have a vibrant future. And I’m glad to say that America has been covering the many changes and challenges facing these schools. Many questions remain, but I am glad that America is helping to foster conversations about meaning and mission.

These conversations have included the hope that the lessons the pandemic has provided for Catholic schools might point to a better way forward. In one article, Jeff Hausman, the founder and president of Arrupe Virtual Learning Institute, a provider of online student coursework and collaboration, described Catholics schools as “a place where tradition and change can converge.” And Kathy Mears, the interim president and chief executive officer of the National Catholic Educational Association, wrote about how the pandemic has helped Catholics schools to see that they can pivot in order to benefit the person.

A willingness to pivot in the face of new needs, might mean attempting hybrid virtual and in-person learning for the long term, like Lumen Verum Academy in the Archdiocese of Boston. Or it might mean implementing an 11-month school year and 10-hour days to help prepare boys at Loyola Academy at Brophy College Preparatory in Phoenix to be men for others. Or maybe it means arguing that Catholic schools must “foster the capacity of our students to recognize racism in all of its forms—both in their personal implicit biases and in systems and structures that perpetuate unequal opportunity still today—and to oppose them vigorously through concrete action,” as Christopher J. Devron, S.J., president of Fordham Preparatory School in the Bronx, N.Y., wrote.

But Catholic schools also know that even in the midst of a changing world, their identity remains constant. The entryway to my elementary school had a sign that I’ve seen in many schools since, which reads in part, “Christ is the reason for this school.”

Sometimes living out this countercultural identity means working on behalf of the poor with a food drive competition among 15 Jesuit schools across seven states. Sometimes it means embracing a particular charism, like the Benedictine vow of stability. It might mean welcoming 22 students at a Jesuit high school into the Catholic Church.

Ideally, Catholic schools exist at the intersection of faith and the world. They are not places that exist to shield students from reality, nor are they places where students deal only with secular concerns. They help students process their experience through the lens of faith with the hope that their work in the world will reflect that.

Sister Percylee Hart, principal of Union Catholic High School in New Jersey—the alma mater of the gold-medal Olympian Sydney McLaughlin—has made a habit of encouraging all students to achieve their best. “Each one is special, God’s creation,” said Sister Percylee of her students. “They have special gifts and talents, and the call is to become all God calls you to be. And here, we’re going to help you do that.”

Luckily, Sister Percylee is not alone in this effort. Which is why this week we celebrate Catholic Schools Week to honor the thousands of Catholic school faculty and staff who work endlessly on behalf of their students, as well as the parents who scrimp and save and support the schools in endless ways. (Want to buy some wrapping paper?) And the students who embrace the mission—and remind us of it. And who one day, God willing, will be the ones to continue it.

America has several reports, essays and opinion columns about the past, present and future of Catholic schools. You can find all of them here, but the following list is a good place to start: