The Jesuit High School in Florida that welcomed 22 teenagers into the Catholic church this year. 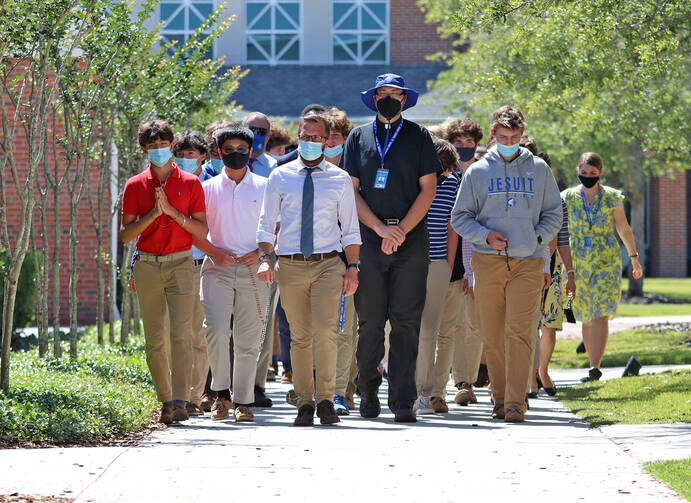 Who says teenagers are not interested in religion anymore?

Certainly not very many people at the all-male Jesuit High School of Tampa, Fla., where 22 students, including boys from every grade level, received the sacraments of initiation into the Catholic Church. The group included 14 students who were baptized after growing up with no religion, as well as eight students who were already baptized in other Christian communities and received first reconciliation, confirmation and first Communion. The sacraments took place within two socially distanced school Masses on May 13 and 14.

One of the Generation Z “nones” who were baptized is Luke Knight, a freshman. “It means a lot to me because most of my dad’s side of the family is baptized,” Mr. Knight said in a telephone interview. Many of his family members traveled from Indiana for the occasion.

Mr. Knight says his baptism, in the midst of pandemic restrictions, was one of two big personal events that shaped his first year of high school. The second big event was that Mr. Knight became the new starting quarterback of the Jesuit Tigers football team at their first spring game the very next day. “I’m excited to see what comes as I get to know Christ better, to be a happier and healthier person in the coming football season,” Mr. Knight said. His aunt, whom he describes as “really faithful,” served as his godmother and sponsor.

Who says teenagers are not interested in religion anymore?

Remarkably, none of the 22 students were holdovers from last year. After coronavirus quarantines shut down the campus in spring 2020 and the Easter season Masses were canceled, five students became Catholic at a smaller liturgy on campus late last June.

An on-campus celebration of the sacraments of initiation is unusual for Jesuit schools both nationally and locally, as the Rite of Christian Initiation of Adults is most often conducted in local parishes. Jesuit Tampa’s program has averaged between five and seven students per year since it began 10 years ago.

In a telephone interview, Mr. Mitchell said it is particularly remarkable that so many Jesuit Tampa students wish to enter the Catholic Church during this difficult year, given that the school has not been able to host its usual mission and service trips nor any of the major overnight retreats. Students have felt heightened levels of anxiety, frustration and sadness over canceled activities both secular and spiritual.

Paradoxically, Mr. Mitchell said he thinks the pandemic may have actually spurred this year’s large number of students seeking the sacraments of initiation.

“These limits have inspired a lot of creativity and generosity among our students,” Mr. Mitchell said. “Given that we were still reeling from Covid-19, we didn’t want to wait for retreats and international pilgrimages to come back before we started helping students encounter the love of God for them. We wanted to bring the spirit of those retreats and pilgrimages to campus in a new way: the spirit of brotherhood, vulnerability and conversion.”

Mr. Mitchell praised Jesuit Tampa’s peer ministry culture of identifying and encouraging students who are respected by their peers to take on leadership roles in religious programming, thus empowering natural leaders. This framework proved useful for meeting the needs of students seeking deeper connections with God, others and themselves during the anxieties of the present time.

“We have a ton of upperclassmen who take their faith seriously and are very zealous,” Mr. Mitchell said. “They’ve been pretty profound witnesses as peer ministers for these underclassmen.”

According to Mr. Mitchell, the other big factor feeding the R.C.I.A. program this year has been the school’s discipleship groups. He said Jesuit Tampa currently has 12 small groups of eight to 12 students who meet every week during their lunch period to explore in depth about their struggles with various vices and personal issues, challenging each other in their prayerful conversations to go deeper.

“I call it a culture of conversion.”

Mindful of the prevalence of addiction to internet pornography among their peers, he said the students challenge each other in particular to be pure and chaste.

“I call it a culture of conversion,” Mr. Mitchell said. “Right now it is a cool thing on campus to be into your faith. Living a virtuous life, engaging in a consistent personal prayer life and participating in the sacraments are not fringe ideas here.”

Mr. Knight echoed Mr. Mitchell by saying how much his theology teachers and older peers helped him make the decision this year to become a Catholic. Although his father grew up Catholic and his family occasionally attended Mass when visiting relatives, Mr. Knight had not felt any connection to God or religion before this year. Then, late last November, he heard during homeroom about the school’s blossoming R.C.I.A. program and decided to attend a meeting.

“Most of those kids at the meeting were already Catholic, but I didn’t consider myself Catholic,” he said. “I never had that connection, never understood how to pray or how to connect with God.”

In conversation with a close friend who was also going through the process, and who also joined the Catholic Church in the school Mass on May 13, Mr. Knight decided to come back for more classes. The two students soon found themselves attending adoration together and discussing their faith.

“Every time we went to adoration, we would look at each other and say: They seem like such great people, so happy and full of faith,” Mr. Knight said. “My buddy Wade and I wanted to be like that, to have that connection with faith.”

Mr. Knight said developing a prayer routine has been the most valuable part of the R.C.I.A. process for him. At their meeting each Thursday, the students in the program eat a meal together, say a prayer, check in about how their prayer is going and discuss some readings in the Bible to process what Jesus said and what they think he meant. They have also been discussing what baptism will mean for them.

Mr. Knight concluded: “I would say Jesuit [Tampa] has put Catholicism in front of us in an easy-access manner, to the point where it makes you say, ‘Why not?’ Meeting so many great people of faith at Jesuit has really made a difference for me.”