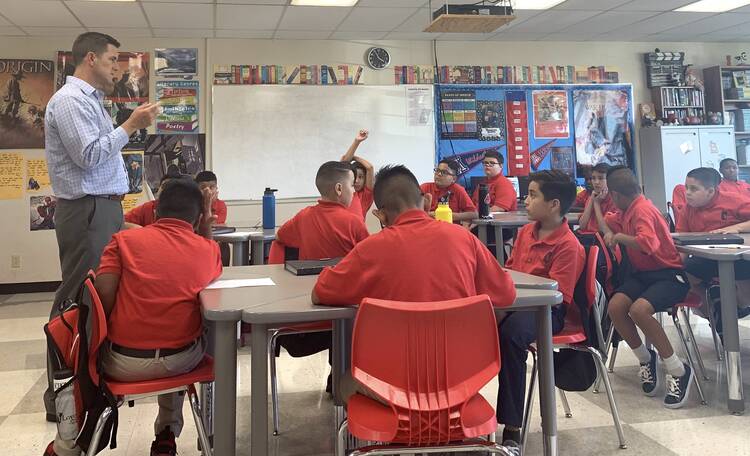 When Sandra Soto’s sons started at Loyola Academy, she told them they had to rise to the occasion.

Loyola Academy at Brophy College Preparatory in Phoenix is a program for incoming sixth grade boys who demonstrate academic gifts and financial need. Loyola students attend sixth, seventh and eighth grade in preparation for their education at Brophy, which is also all-male. The average yearly income for a student’s family is $22,500.

“You are going to have to form the habit of work, you know; it’s not playing around."

In 1928, Brophy was founded as a Catholic high school in the Jesuit tradition. Like Jesuit schools throughout the United States, Loyola Academy and Brophy seek to form “men and women for others.” The Brophy community supports Loyola students’ education by providing tuition, meals at school and transportation at no cost to their parents.

Ms. Soto immigrated from Chihuahua, Mexico, 27 years ago. At first, she went to school to learn English but had to drop out after four months. She needed a job, so Ms. Soto decided to work in a Japanese restaurant where only a few employees spoke Spanish in the hopes of improving her English. It worked.

Today, the mother of five works for a towing company that impounds cars for local police departments. While her own formal education stopped after sixth grade, she made school a priority for her family. Her two oldest daughters graduated from public high school, and one of them went on to graduate from Arizona State University. Her oldest son is currently doing well at a local public high school.

Still, she always hoped to give her children something extra through Catholic education. That is happening now at Loyola, where her two youngest children are currently enrolled. Ulises is in the sixth grade; Leonardo is in eighth.

Ulises, who is 12, said starting at Loyola during the Covid-19 pandemic has been tough, but nevertheless he has enjoyed his classes and likes his teachers. He said he is particularly enjoying his humanities class, where he has been studying World War I.

“Actually, almost, like, everything is a really big change. Not in a bad way, but in a positive way. [Teachers] help you understand subjects a lot more clearly."

“Actually, almost, like, everything is a really big change,” he said of his experience this year at Loyola. “Not in a bad way, but in a positive way. [Teachers] help you understand subjects a lot more clearly.” He says that in math, his teacher will take the time to explain a problem more clearly when he is confused. Ulises also said that the teachers stress discipline.

His older brother, Leo, is 14 and has been at Loyola for the last three years. Leo said he has found it much more challenging than his experience in public school. “I’ve definitely learned more,” he said.

Leo’s favorite subject is math because he excels at it. Next year, he moves on to Brophy.

“I’m pretty nervous, to be honest,” he said of making the transition. “I can tell it’s going to be a lot more challenging.”

Leo said he has a great deal of homework and he is anxious about going to a bigger school but has found camaraderie with his Loyola classmates. “Going with the same class for three years, you always have friends,” he said. “You can always have a good time there without being too worried about your social life.”

Ms. Soto said most of the students at Loyola come from minority communities. Though it has been a challenge this year, she said the families at Loyola form relationships with each other. She misses the regular in-person get togethers, where all the families would gather to celebrate Christmas or Easter.

The mothers will drop off their sons at the bus stop, she said, and if one mom cannot make it in time for pickup, another will cover for her. “We are all very friendly, willing to take care of our kids and help each other,” she said, though Covid has hampered that a bit. “That’s one of the things that they do at the school is help form this community. It really, really helped us as parents, because we interact with each other and help each other.”

They have online meetings now, Ms. Soto said, but the parents do not have the kind of conversations they would during in-person gatherings.

“It’s really good here because everyone is living under the same circumstances,” Leo said of the community he has formed with other classmates from low-income families. “That helps us get along better. We can relate to each other a lot more.”

In addition to working on homework together, eighth graders also play video games as a community.

Since 2011, the rigorous program at Loyola has prepared students for the challenging curriculum at Brophy. Loyola describes its program as an 11-month school year with 10-hour days, but Kendra Krause, the director of the program, explained that the 11 months include summer school programs and campouts. The 10-hour days include flex time, when students can seek out tutoring and extracurricular activities, like chess club, robotics and drama. These mandatory hours after school prepare them for the typical life of a Brophy student.

“I think for the most part for kids, the day feels pretty fun,” Ms. Krause said. “They feel challenged and rewarded and a part of a community. For some of the kids, this is the first time they’ve been someplace where it’s cool to be smart. They like that.”

The vast majority of those who graduate go on to four-year college programs.

Not all students who begin studying at Loyola in sixth grade make it through graduation from Brophy, Ms. Krause said. The struggles usually start in seventh grade, after the newness of the program wears off a bit and students start to think about doing six more years at the same exacting pace, she said.

“They’re 10 when they apply,” Ms. Krause said. “Brophy is a great place, but it’s not for everybody. It’s a grind. It’s a lot of hard work. And they look at kids in high school, and sometimes they think it’s not necessarily their bag.”

In a typical year, Loyola receives at least 50 applications to the program and accepts just over half. Administrators prioritize incoming sixth graders who would not be able to get into Brophy academically without the help of the program, Ms. Krause said. Loyola strives to close the gaps in students’ education before they enter high school.

The first Loyola class graduated from Brophy in 2018. Of the 18 graduates, 17 went on to become first-generation college students. The other graduate enlisted in the U.S. Navy.

The vast majority of those who graduate go on to four-year college programs. Of the 45 who have graduated in the last three years, 44 immediately enrolled in college.

“Without this program, I would not be able to put my kids into that kind of school so that they receive that kind of education,” Ms. Soto said. “I’m so happy with the school. They’re doing so good. I don’t even have to tell them, ‘Hey, are you doing your homework?’ They just do it. It’s a very, very good program.”