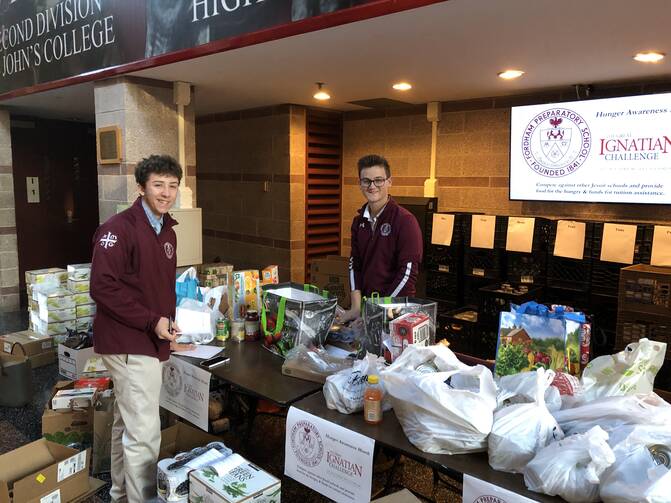 Jim Rowen is the chief operating officer of Renaissance Technologies, a hedge fund, and a 1982 graduate of Fordham Preparatory School in the Bronx, New York. He served as chairman of Fordham Prep’s board of trustees from 2014 to 2017, where he developed the idea for the Great Ignatian Challenge, a yearly competition among Jesuit high schools to see which institution can bring in the most donations for local charities. Fifteen schools in seven states now take part in the challenge, which began in 2016. The schools compete for a series of awards that fund financial assistance programs and endowments. Mr. Rowen has donated over $1.4 million to the program thus far and has pledged another $450,000 this year. This interview has been edited for length and clarity.

Update, Dec. 6: This year's Great Ignatian Challenge raised a total of 334,000 pounds of food. The 15 participating schools will split the $450,000 in prize money; the top three schools were Scranton Preparatory School, the Loyola School and Fordham Preparatory School.

T.R.: We’re both graduates of Fordham Prep in the Bronx. Can you tell me a little bit about how you wound up going there?

J.R.: I grew up in Long Beach, a town on Long Island. My parents divorced when I was 1 year old, and my father had gone to Brooklyn Prep and was a big believer in the structure that Jesuits provide. When it came to high school, the question was: “Where do I go?” My mother wanted me to go to Long Beach High, and my father wanted me to go to a Jesuit school. He had friends who had gone to the Prep. He had impressed upon me how important it is to have a good high school education and told me that’s where I was going. In the ’70s, you never were asked. You kind of were told.

The Great Ignatian Challenge is a yearly competition among Jesuit high schools to see which institution can bring in the most donations for local charities.

So for the next four years, I commuted from Long Beach to Fordham Prep in the Bronx, leaving my house at 5:30 a.m. and getting home after football or swimming practice around 9 p.m.

It was an interesting time, right? Because at that point, there are no cellphones. City’s a tough place, and I will tell you: that commute was part of my education because it just prepared me to deal with things.

Needless to say, the whole experience that Fordham Prep provided me was something that shaped my life forever. I have a tremendous sense of gratitude and a feeling of debt to the Jesuits and to Fordham Prep.

Who were some of your favorite teachers there at the Prep?

I had Jack Foley. He was still there when I was chairman of the Prep’s board. Father Stan O’Konsky. Man, he saved my bacon. When my family couldn’t come up with money for me to go to college, he was like, “Supply your application. We’ll figure it out.” Dean Robert Baisley, who was our dean of discipline, the administrator of jug [detention] and all things wonderful like that.

For me and for my kids, I was the same way as my father was, focused on high school, because when you come out is kind of who you’re going to be. It’s a formidable time, and that sausage machine…. It better be the best sausage machine.

You are also a graduate of Fordham University and what is now the Gabelli School of Business. When you were figuring out whether to go to business school, how did you come to that decision? Was there something about being at Fordham Prep that pointed you in that direction?

I’ll just give you a story. When I started in the financial services industry, part of the aspect that would differentiate me was the ability to solve problems, under what I would consider tremendous pressure. Everything for me would just slow down, and I would take that kind of process that I’d learned from my commute as well as from the Jesuits and say, “Okay, let’s take a step back, and let’s compartmentalize. Let’s sequence and see what we can come up with.”

I was in a meeting one time with a group of people that I didn’t really know, but a big issue had occurred at a bank, and it had to be solved. There were probably 20 people in there. I made a comment, “Man, someone’s going to get jug for this.” You would assume that no one would know what you were talking about, but five people in the audience stared at me, right?

We came up with the solution, and at the end, those five people came up, and they go, “You went to a Jesuit school?” That immediately created a bond among that group of five because we shared something.

That kind of connection from a Jesuit school really just never leaves you.

Let’s discuss the Great Ignatian Challenge. How did that come about?

What I realized is all these schools are doing basically a canned food drive, but competition yields a better result. What I did is applied a very basic business school universal truth or law to it and said, “Okay, let’s see if we can inject a little competition for a common good.”

If everybody’s already doing this can drive, it’s no more work for them. The first year we did this, the yield per student was up like seven times. Where somebody would bring in five or six Campbell’s Soup cans, they were now bringing in 15 or 20. It just started to snowball.

If you think about it, it’s probably the most profitable to the schools of anything they do. There’s no rentals required. There’s no media companies required. There’s no catering required, so it’s all pure profit to them. They’re getting a tremendous amount of what I call franchise value, right? Folks like you who are interested in writing a story about it. “Why should I send my kid to a Jesuit school?” Well, look at the good that they’re doing.

Since you were on the board at Fordham Prep, you know how it’s grown over the years. Do you think alumni need to play a greater role in helping these schools to grow and to cultivate their identity, especially at a time when there are fewer Jesuits?

For me, Tim, this is a strategy question that you and I should have over a beer, but what I think should happen is there has to be some understanding of what schools can do to better improve sense of debt or obligation that I mentioned early on in our conversation—because I don’t know how many students leave with that. I have a feeling you did, but I’m not sure how many others do. How many shared the Tim or Jim feeling that, wow, this was pretty special, and I have an obligation to pay it forward? Because if you don’t have that, my experience will be foreign to other alumni.

I think the schools today have to figure out how to cultivate that—because in 10 or 15 or 20 years, when you try to reel them back in, it’ll be easy, and they’ll be plentiful, right? If you don’t do that, if it’s just an education, a diploma, you’re not going to be that interested in coming back to help. So creating that connection, that feeling of obligation, I feel, is extremely important.

Maurice Timothy Reidy is deputy editor in chief of America and a 1993 graduate of Fordham Prep.