Explainer: Pope Francis is naming St. Irenaeus a ‘Doctor of the Church.’ What does that mean? 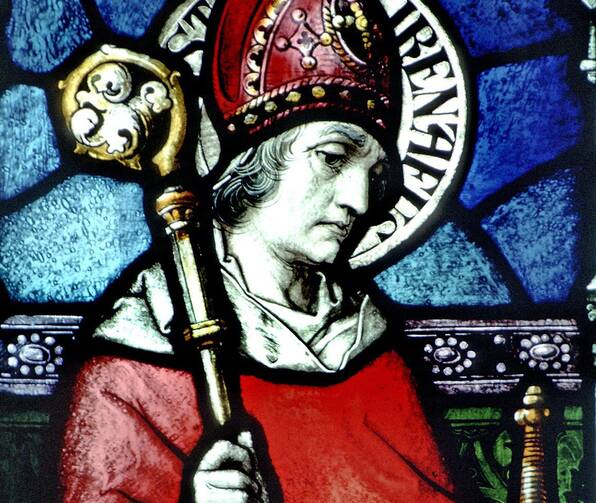 St. Irenaeus of Lyon is pictured in a stained-glass window at the Basilica of Our Lady Immaculate in Guelph, Ontario. During an Oct. 7, 2021, meeting with members of the St. Irenaeus Joint Orthodox-Catholic Working Group, Pope Francis said he will soon declare St. Irenaeus a doctor of the church. (CNS photo/The Crosiers)

Earlier this month, Pope Francis said he intends to declare St. Irenaeus of Lyon, a second-century theologian best known for his writings against gnostic sects, a doctor of the church. The venerable saint will be given the title of “Doctor of Unity” for his work to bridge divides between Eastern and Western Christianity in the Mediterranean basin in the early church. He is the 37th person to be recognized as a doctor of the church.

What does that mean? Is he really a doctor, or does he just play one on TV? Does he rush to someone’s aid on an airplane? Might he collaborate with Dr. Dre?

The title “Doctor of the Church” first emerged in the Western church in the early Middle Ages (doctor comes from the Latin for learned). It is an honorific reserved for those recognized as superlative sources of great wisdom and holiness, usually for displaying three qualities: He or she was a person of eminent learning (eminens doctrina), displayed a marked degree of holiness in life (insignis vitae sanctitas) and was recognized for such qualities by a declaration of the church (ecclesiae declaratio). In recent centuries, the Catholic Church has equated the third condition with approval from a pope, though in the early church (both East and West), someone could be designated a doctor of the church by the decree of a council or by popular acclaim.

Is St. Irenaeus really a doctor, or does he just play one on TV? Does he rush to someone’s aid on an airplane? Might he collaborate with Dr. Dre?

St. Irenaeus joins 32 other men who have been so honored, along with four women (all of whom were named since 1970). Other than being male, the surest route to becoming a doctor of the church (in addition to sainthood) is to have been a bishop (19 of them, including St. Irenaeus), though it helps to have been from Europe (27) too. The Christian churches of the East typically still recognize all those honored as Doctors of the Church before the Great Schism between East and West in 1053, though Eastern churches tend not to use the title; individual churches sometimes have their own modern traditions of such figures.

Parallel to the dramatic increase in the canonization of saints in the 20th century, the naming of doctors of the church has become rather more frequent in recent decades in the Roman Catholic Church: Of the 37 now recognized (once St. Irenaeus gets the official nod), seven have been named since 1970, and 20 since the close of Vatican I in 1870. For many centuries, the church in the West recognized only four Doctors of the Church (Sts. Ambrose, Augustine, Jerome and Gregory the Great) and the church in the East only three (Sts. Basil the Great, Gregory of Nazianzus and John Chrysostom).

While traditionally great scholars and preachers have dominated the ranks of the doctors of the church—think Sts. Bonaventure, Aquinas, Bellarmine, Anselm and Canisius, in addition to the seven stalwarts mentioned above—a number of recent arrivals have been on the more mystical side of the fence, theologically speaking. Before St. Irenaeus, the last six named were known as mystics or visionaries as well as teachers: Sts. Teresa of Ávila, Catherine of Siena, John of Ávila, Thérèse of Lisieux, Hildegard of Bingen and Gregory of Narek.

St. Irenaeus—revered in the East and West alike—can also stand as a powerful symbol of Christian unity.

Why St. Irenaeus and why now? Like many other processes in the church (including canonizations), there can sometimes be a bit of ecclesial signalling going on when a pope names new doctors of the church. For example, Pope Paul VI was hardly the first to notice the sanctity and wisdom of Sts. Teresa of Ávila and Catherine of Siena; his recognition of them as the first two women doctors of the church in 1970 was obviously motivated to some degree by the women’s rights movement and by the Second Vatican Council’s recognition of the universal call to holiness in the Dogmatic Constitution on the Church, “Lumen Gentium.” They were joined by St. Thérèse of Lisieux (to whom Pope John Paul II had a great devotion) in 1997 and St. Hildegard of Bingen in 2012.

St. Irenaeus offers a little something for everyone. On the one hand, his fervent defenses of traditional church teachings handed down from Jesus and his apostles through the bishops—his most famous work is called Against Heresies—could make him a hero to Catholics alarmed by a perceived decline in orthodoxy in the modern church. On the other hand, in his affirmation of the universality of the possibility of salvation and the inherent goodness of creation (against the Gnostic teachers of the time), St. Irenaeus offers in his teachings a profound defense of Vatican II as well as a bit of a boost to environmentalists.

Pope Francis, however, seemed to have another goal in mind when he announced his plans to the St. Irenaeus Joint Orthodox-Catholic Working Group, an ecumenical effort to establish a space for dialogue between Catholics and Orthodox Christians. “Your patron, St. Irenaeus of Lyon—whom I will soon declare a doctor of the church with the title, ‘doctor unitatis’—came from the East, exercised his episcopal ministry in the West, and was a great spiritual and theological bridge between Eastern and Western Christians,” he said. In other words, St. Irenaeus—revered in the East and West alike—can also stand as a powerful symbol of Christian unity.